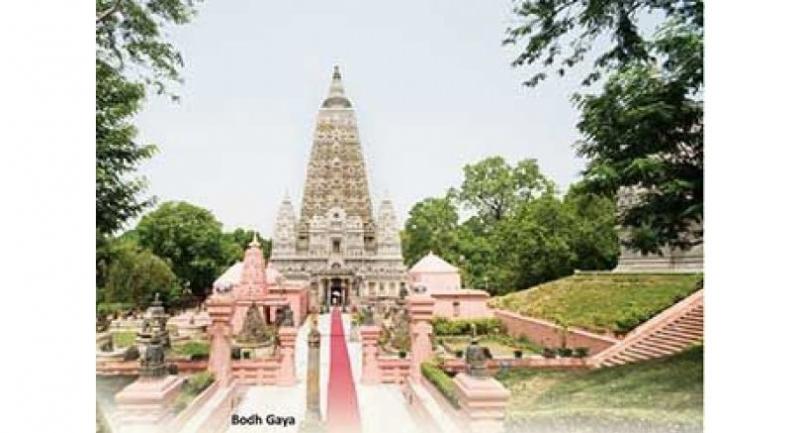 By Bhante Dhammika of Australia
The Island
Asia News Network

When devote Buddhists go to Bodh Gaya in India, the site of the Buddha’s awakening, and they enter the great Mahabodhi Temple, they will see before them, on the main altar, a large and impressive Buddha statue.

Many will make offerings of flowers before it, some will have their photograph taken in front of it, others will sit in silent awe reflecting on the wisdom and compassion of the Buddha. Although this fine statue seems to be an organic and integral part of the Temple it was not originally made for it and is actually many centuries younger than it. So what is the story behind this iconic statue and how did it get to where it is today?

For several centuries after the Buddha there was no temple at Bodh Gaya, just the Bodhi tree with a railing, a type of fence, around it. Eventually, a temple of wood and brick was built around the Bodhi tree, something like the Bodhi tree shrine at Punchi Borella Junction. This shrine was enlarged and repaired many times over the next several centuries. The oldest Buddha statue ever found at Bodh Gaya, now badly damaged, dates from the year 283 CE and may have been made for this shrine, Buddha statues were just coming into vogue at about this time. Prior to this the Buddha was only depicted symbolically, as a pair of footprints, a wheel, an empty throne, etc.

Exactly when the present Mahabodhi Temple was built is not certain but it was probably at the beginning of the 4th century CE. We know from inscriptions and the accounts of pilgrims that a Buddha statue of great beauty was made for the temple. It was known as the Image of the True Face because it was believed to be an actual portrait of the Buddha. For about 700 years this Buddha statue sat on the altar in the sanctum of the Mahābodhi Temple and was the most revered of all the many statue to be seen at Bodh Gayā. There is no record of when this statue disappeared, possibly at some time during the Islamic conquest of Bihar or in the subsequent decades. The last record we have of it dates from 1413 when Achariya Sariputra, the last abbot of Bodh Gaya, gave its dimensions to the Tibetans so they could make a copy of it. After this we hear no more of it. When the English surveyor Francis Buchanan visited Bodh Gaya in December 1811 there was a statue in the Mahabodhi Temple which he said was made of brick and plaster and which he described as crude and artless; it may have been made as a substitute for the original.

The statue in the sanctum of the Mahābodhi Temple which the pilgrim sees today dates from the 10th or 11th century. Carved out of black chlorite stone it is a particularly fine example of Pala period sculpture, capable of evoking admiration in the tourist and devotion in the Buddhist pilgrim. It depicts the Buddha in the earth-touching gesture and rather than the usual double-lotus throne it sits on a patterned cushion. On the plinth below this cushion are five niches divided from each other by small pillars. The two outer niches contain lions and the next two contain elephants. In the central niche Paṭhavi, the Earth Goddess, is shown rising from the ground, holding a vase of jewels and witnessing the Buddha’s victory over ignorance. All these figures and the pillars are in high relief. Directly below the niches is a partly damaged inscription in two lines providing some information about the statue. The first line is the usual the Epitome of Dependant Origination (Dhamma Pariyaya) always used in ancient India to consecrate images. The second part says that the statue was donated by one Sri Purṇabhadra, son of Samanta and grandson of Dharma of the Chhinda family. It seems he had constructed a small temple at Bodh Gaya and installed three statues in it, including the one now under discussion, with the assistance of Acharya Jayasena. The Chhindas were minor feudal lords who ruled the area around Gaya in about the 10th and 11th centuries. Jayasena is mentioned in another inscription as having donated land to the Sri Lankan monks at Bodh Gaya. There is no way of knowing exactly where at Bodh Gaya Sri Purṇabhadra built the small temple in which he enshrined this and the two other statues.

By the middle of the 19th century the Mahabodhi Temple was badly ruined and in serious need of repair and in 1880 the British Indian government decided to do just that. The well-known and experienced engineer Joseph Beglar was given the task of carrying out these repairs. After he had finished the outside to the temple his next step was to repair the inside, the inner sanctum. Having done this he realized that his task would be incomplete if the sanctum was left empty; the altar needed a statue on it. He examined the many statues lying around Bodh Gaya but most were either damaged, too small or of bodhisattvas rather than of the Buddha, but eventually he located a suitable one. The image was disfigured by whitewash and lime plaster which required a great deal of effort to scrape off. With the cleaning completed the majesty of the statue became apparent; its surface was smooth and shiny and its countenance serene. Beglar has left us no details concerning how he moved the statue into the Mahabodhi Temple but it would have required a great deal of manpower and considerable care; it is a large sculpture, over three meters high and weighs a ton or more. It was finally maneuverered into the temple, winched up above the altar, suspended exactly over the position where it was to be placed, and then slowly lowered onto it. Today Sri Purṇabhadra’s Buddha is covered with gold paint and its facial features are painted in Tibetan style. While this obscures the statue’s original character it does not detract from the powerful impression it leaves on those who come to Bodh Gaya.

Tags:
Bodh Gaya The Story Of