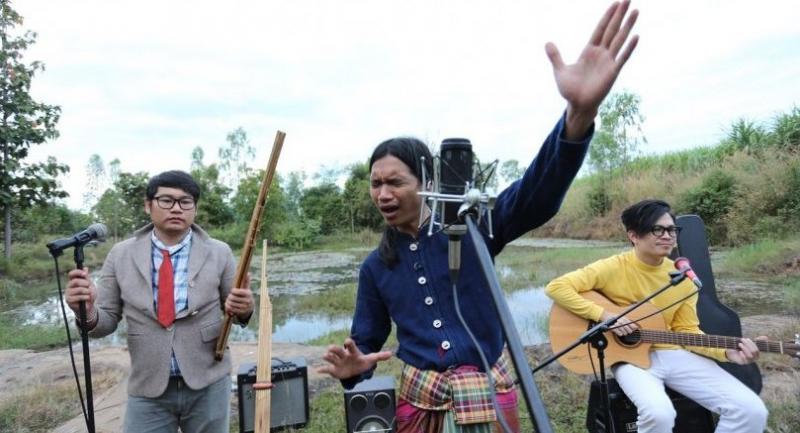 Three friends form a mor lam band and dream of introducing this northern sound to the world in “Morlam Mania” coming to screens .

If there's one outstanding lesson to be learned from a review of Thailand’s film industry in 2018, it’s that audiences are increasingly turning their attention to stories coming out of the Northeast region or Isaan as it is known locally.

Evidence can be found in the success of “Thi Baan The Series”, which earned Bt120 million at the box office and stayed in cinemas a tad longer than many of their contemporaries.

That success has been noted by major studios with the result that a whole lot of films with an Isaan theme will be hitting theatres over the next 12 months.

Last year Pranakorn Films company enjoyed a quiet triumph with “Huk Phaeng”, which brought together luk thung (Thai country-folk) singers from past and present in a romantic comedy. This year Sahamongkol Films is focusing on another Isaan genre – mor lam – for its January 24 release “Morlam Mania”, which boasts an all-Isaan cast and crew including director Nantawut Phoophasuk from Kalasin and stars morlam singer Jirayu Sootchai as the protagonist. The TV comedy series hit “Diaries of Tootsies” is being brought to the big screen by GDH with the same cast (in picture) and director.

It will be interesting to see how filmgoers react to the film. Since 1997, when “2499 Antapan Krong Muang” (“Dang Bireley's and Young Gangsters”) gave an ailing Thai film industry a welcome shot in the arm, local movies have tended to centre on life in Bangkok. Those that did portray life in the countryside –Bin Bunluerit’s “Panya Renu” series and Petchtai Wongkamlao’s “Yam Yasothon”, for example, were slammed for not painting a realistic portrait of Isaan life.

That all changed with the release of “Phoo Bao Thai Baan Isaan Indy”, a simple tale in the local dialect, and the launch of “Thi Baan the Series” in 2017 with two parts released in 2018 alone.

The producers of “Thi Baan The Series” aim to create their own universe and so this year they are planning three projects, the first of which, “Sapparer”, is a kind of horror film centred on the local belief in spirits and ghosts. That will be followed by “The Pong”, which will focus on the much-loved character of the same name and his ambitious project of running Sukcheva’s vegetable store project after he returns from studying in Bangkok. The third and last project for 2019 will be “Thi Baan The Series 3”, for which the producers plan to bring Bangkok’s urban pop idol group BNK48 to experience life in the countryside.

GDH has confirmed three films for 2019 and will also produce more TV dramas for its parent company GMM.

The first outing in 2019 from GDH will be the romantic comedy “Friend Zone” by Chayanop Boonprakob of “May Who?” fame. The year will also see the return to the mainstream of popular director Nawapol Thamrongrattanarit after a spell working independently on “Die Tomorrow” and on a well-received documentary about BNK48. Another promising project from GDH is the big screen adaptation of the hit TV series “Diary Tootsies the Series” starring the original cast of Ratthanant Janyajirawong, Thongchai “Ping Pong” Thongkanthom, Paopetch Charoensook and helmed by director Kittiphak Thong-aum.

After releasing two movies late in 2018, both of which earned critical acclaim but failed to rake in the cash, TMoment is staying mum for the moment on the direction it will be taking in 2019. Five Star Entertainment will underline its strength in the horror comedy genre with “Phee Nak” staring Chinawut Indracusin as a man who goes to be ordained at a temple that’s housing a ghost who likes to kill nak as men going through the ordination ceremony are known.

Sahamongkol Films will follow up “Morlam Mania” with “Khun Phan 3” and Prachya Pinkaew’s latest project “Sisters”, which offers a new take on the krasue ghost. The story focuses on the bond between sisters who are separated at a very young age. The older of the two dedicates her whole life to being trained as a demon hunter so she can protect her younger sister who is weaker. Shooting was completed on the film, which stars Ployyukol Rojanakatanyoo and Nantapat “Munich BNK48” Lertnamchertsakul, a while ago but no date has yet been set for the release.

Independent filmmaker Kongdej Jaturanrasmee is now working on his next project called “Where We Belong” after winning the CJ Entertainment award of $10,000 (Bt330,000) at the Busan International Film Festival that comes with a first-look option for production, investment, sales and distribution.

Kongdej returns to Chantaburi, which featured in his last film “Snap”, and this time turns the camera on two young women: Sue who is going to study aboard and her friend Belle, who is helping her finish all the items on her checklist before she leaves. The friends compare their lives – one who will soon leave to continue on her journey, and the other who will stay and live in their small town just like she always has.

Sue realises that, no matter whether she gets through all the things on her checklist or not, there will be things which she has to let go. The two protagonists are played by BNK48 members Jennis Oprasert and Praewa “Music BNK 48” Stuhampong. Nirut Sirijanya on the set of upcoming movie Nang Non (“The Cave”), which tells the true story of the rescue of 12 young footballers and their coach./photo De Warrene facebook

One of the likely highlights this year is “Nang Non” (“The Cave”), which should be the first movie to chronicle the story of the 12 Thai boys and their football coach who were trapped in the Tham Luang Cave in Mae Sai, Chiang Rai last July. Directed by Thai-Irish director Tom Waller, the film opts to follow the rescue operation through the eyes of Irish diver Jim Warny, who will play himself in the film. According to the DeWarrene Facebook page, shooting is now complete and a release date has been set for July to mark the first anniversary of the rescue.

Palme d’Or winning filmmaker Apitchatpong Weerasethakul also has a new project though whether it will suffer the same fate as his last – 2015’s “Cemetery of Splendor” – and never be screened in Thailand remains to be seen.

“Memoria” will set a new milestone for Apichatpong as the film is set in Colombia. Starring Tilda Swinton, it’s his first feature shot outside of Thailand.

So all in all, it should be an exciting year for Thai cinema and this could well be reflected in the new system for box office records currently under development. Unlike South Korea and other countries, which have a clear procedure to measure audience attendance records, the keeping of a coherent record here has been severely limited by the system of distribution. For decades, movies were sold solely to distributors in each region rather than using the normal practice of profit sharing with film companies, thus making it impossible to check the actual audience for each movie.

While this system still exists in some places, the boom in multiplexes is allowing a count to be made. Official box office records have been kept for Bangkok and Chiang Mai and last year Major Cineplex started to show “countrywide” records that took account of all income from their own multiplexes as well as their rival SF Cinema and the distributors.

Last year, the top grossing film was “Nakhee 2” with Bt417.55 million, Bt146.66 million of which came from Bangkok and Chiang Mai, which shows that the film did better outside those two urban centres. The second top grossing Thai film from GDH “Nong Phee Teerak” (“Brother of The Year”), went the other way, bringing in Bt244.77 million with Bt146.86 million coming from Bangkok and Chiang Mai.

The new nationwide box office figures will take this a step further and truly reflect audience behaviour, thus giving the country’s filmmakers the chance to see how to ensure their products reach out to their target audiences.