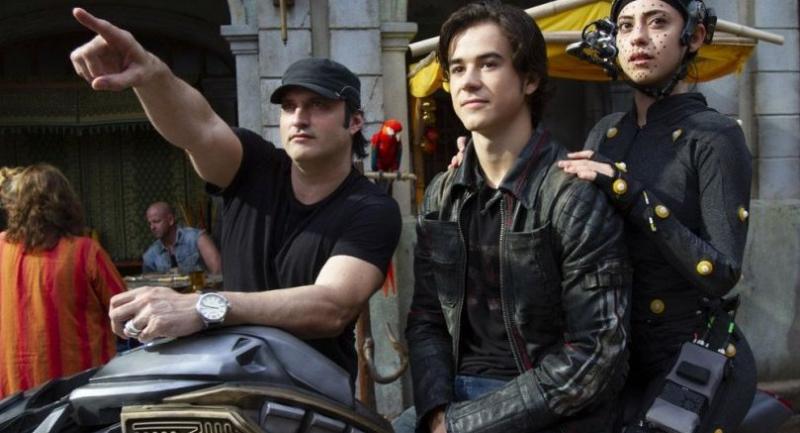 Rosa Salazar and Keean Johnson in a scene from "Alita: Battle Angel"

A collaboration between two of the best filmmakers working today –James Cameron and Robert Rodriguez – “Alita: Battle Angel”, which opens today, is an adaptation of Yukito Kishiro’s popular manga of the same name.

The story is set in a devastated future world where society is split between the haves, who exist on the shining city of Zalem, floating above the Earth’s surface, and the havenots, who must eke out a hard-scrabble living in the Iron City, a place where Zalem dumps its garbage. It’s here that cyborg scientist Dr Dyson Ido (Christoph Waltz) discovers the frame of a mechanoid young woman. As Alita (Rosa Salazar) figures out who she really is and what she’s meant for, the world will never be the same again.

Keean Johnson plays Hugo, the young man who becomes an important part of Alita’s life. Struggling with his own quest to better his life, Hugo has the street smarts to help her cope with a confusing world but might not be as prepared as he thinks for everything that surrounds Alita. Johnson makes his film debut in “Battle Angel”, and here talks about auditioning and getting to do some of his own stunts. How did you first get involved in Alita? Was it just a standard audition? Was it something that you found out about?

I first heard about this from my agent in December 2015 and I got called to go in. I went in, read for the role. And I didn’t hear anything for three or four months until I got a call from my manager. They said, “Robert really likes your tape”. And they told me he’d like to meet me. I met with Robert the first time, and I was so incredibly nervous. He seemed to think that I did a good job despite that. Then I came in for a second meeting with Robert and this time I thought, ‘okay, I met the guy. Now I can really show him without being nervous at all.’ And the second audition went really great. A month later I was told I’d go to Austin, and going to test for the role with Rosa. So, I auditioned. I put my best foot forward. Rosa and I hit it off right away, and I think Robert and I just clicked and it worked out: I was in Alita!

How did you react then when you actually got the part?

I had to wait for 36 days, I think. The most agonising email refreshing, every hour on the hour. I got an email from Robert and the subject said, “Guess What?” and then in the body was a photo of Yukito Kishiro's Alita and it was the moment where Hugo is kissed by Alita. Finally I got the call and was on a flight within five or six days, ready to work for five months.

Who is Hugo and sort of how does he fit into the story?

Hugo’s a kid who’s been torn apart by Iron City for years and he’s learned how to adapt, how to actually thrive there. But all he wants to do is get out and when he meets Alita, he sees a moment where this place becomes interesting for once. What was it about him that appealed to you? And did you look for something you could add to him?

Hugo comes across as this tough, street smart, doesn't-need-anyone type of guy. But he’s very vulnerable. think he hasn't been able to show it to anyone in his life until he finally meets Alita, someone who loves him just the way he is. He doesn’t have to put on a face or put up a front.

You said that you and Rosa found a fairly easy chemistry. How was it working with her and was that bond the two characters share fairly easy to find?

The very first time I met her when we were testing, I was so nervous. And I think that the second I met her, she just came out with open arms and we immediately became friends from the first take that we did. Then when I got the part, we thought it was really important to spend time off set with each other as well, to get to know each other. And we really bonded.

Did you have to get used to her motion capture gear?

It was definitely interesting to get used to the facial camera, because it protruded a foot from her face. So, doing any sort of kissing scenes or anything like that, you always had to be aware of this huge, metal fist coming right at your face! You also worked Christoph Waltz. Was it intimidating working with a two-time Oscar winner?

When you think of him as Christoph Waltz, the extraordinary Oscar winning actor, he is that guy, but he's not that guy. You meet him and he's instantly just another actor doing his job. Every single person was incredible. Jennifer Connelly. Ed Skrein, Mahershala Ali, they were all just people who love to act. This being my first film, it was so cool to see people who have been doing it half their lives and are still just so in love with it.

Did they let you do much stunt work? Any bumps or bruises?

What are you hoping people take away from the movie?

I think the people at Weta and the people who are creating the world of Alita are truly making something that hasn't been done before. And on top of that, it’s just an epic love story between two young kids. So I think everyone will be able to relate to that. And then even further it's about a father figure trying to protect someone he calls his daughter.