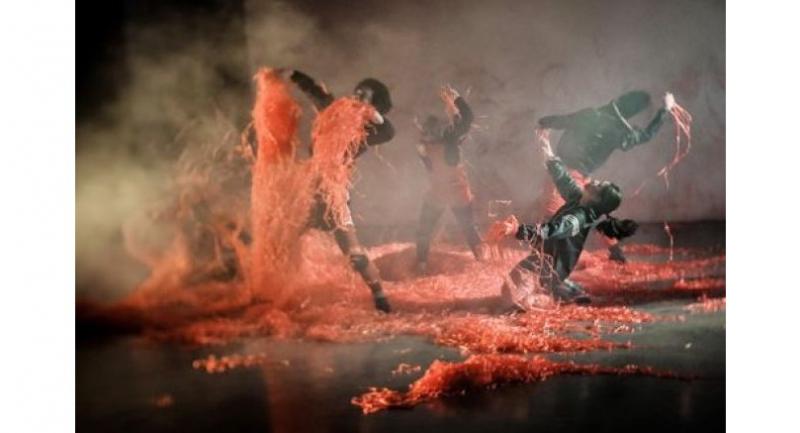 A scene from "Something Missing Vol 3"

Teerawat “Kage” Mulvilai, co-artistic director of B-Floor Theatre was the picture of delight on Tuesday evening at the Bangkok Art and Culture Centre (BACC) as he stepped up to the stage at the International Association of Theatre Critics (IATC) Thailand Dance and Theatre Awards 2018 to receive the evening’s third award for “Something Missing Vol 3”, which he co-directed.

The production, which won all three of the awards for which it was nominated, namely best art direction, performance by an ensemble and movement-based performance, was co-directed by Teerawat and he told the assembled audience that his South Korean partner-in-crime Theatre Momggol would be equally delighted and honoured, adding that the physical theatre work showed that the two democratic countries share a lot in terms of social and political problems. The matchmaker was the Korean Cultural Centre in Bangkok and the two directors took turns staging the first two versions in 2015 and 2016 at Thong Lor Art Space, with support from Korean Arts Management Services (KAMS). The last was supported by the BACC’s Performative Art Festival (PAF) and the Office of Contemporary Arts and Culture (OCAC), although the level of funding was lower and putting it on was a great challenge.

In his acceptance speech, the latest Silpathorn artist also encouraged all to cast their votes on March 24, saying. “As artists, we need to support those who support arts.” Another international co-production to pick up a top award for best play was chelfitsch’s “Pratthana – A Portrait of Possess ion”, with a Thai cast and a Japanese crew. It premiered in Bangkok, has already been seen in Paris and will soon be staged in Tokyo. Credit for this political and social drama is also due to the Japan Foundation who first introduced internationally acclaimed playwright and director Toshiki Okada to Thai theatre artists and audiences almost a decade ago. Kage’s B-Floor colleague Ornanong “Golf” Thaisriwong was another winner for her solo performance in another politically charged work “Sawan Arcade”, which also reminded us to go to the polls. Golf’s previous solo work “Bang Lamerd” won best original script award many years ago before its revival caught the military government’s, and subsequently the international media’s, attention.

Her male counterpart is British expatriate James Laver whose chameleon skills were put to test in Peel the Limelight’s production of Tony Award-winning drama “I Am My Own Wife”. Laver was performing in “My Mother’s Kitchen” nearby at Siam Pic-Ganesha Centre for Performing Arts so he was unable to pick up the award himself. A previous winner in the acting category, Witwisit Hiranyawongkul took home best adapted script for his “deconstruction” script “{private conversation}: A Farewell to Love of Siam”, based on the script of popular movie “Love of Siam” which shot him to superstardom. “Thanks, theatre people who never say ‘no’ to me,” he said on stage.

Another big winner was Full Fat Theatre’s Nophand Boonyai who took home best original script award for “Taxi Radio” and best directing for “Siam Supernatural Tour”. Like all other award recipients, he thanked all his collaborators, reminding us that theatre is never an individual work, but always a collaboration. That sentiment was also reiterated by the number of theatre artists, from various institutions and generations, on Krissara Warissarapuricha’s list as he gave his acceptance speech for lifetime achievement award. The author of the first-ever Thai-language textbooks in set and lighting design, he’s still teaching at Bangkok University having retired from Chulalongkorn University. He also reminded us that the main purpose of theatre design is not to serve its designer, but the director and actors on the stage.

Before handing out the 10 awards, representatives from IATC Thailand explained why there were no awards for musical theatre this year, saying that the number of musical productions significantly decreased and the critics themselves didn’t watch enough of them. They also made note of the decline of space for theatre productions, with both Democrazy Theatre Studio and Thong Lor Art Space closed, and space for theatre reviews in popular media greatly reduced. Despite this, they expect more collaboration, or crossover, between visual and performing artists, and their spaces. The critics also commended the book “Micro Politics”, described as “a collection of individuals’ responses to politics through four contemporary Thai performance scripts”, all in both Thai and English and previous winners of IATC Thailand awards.

Read the reviews written by IATC Thailand members at Facebook.com/IATC.Thailand.