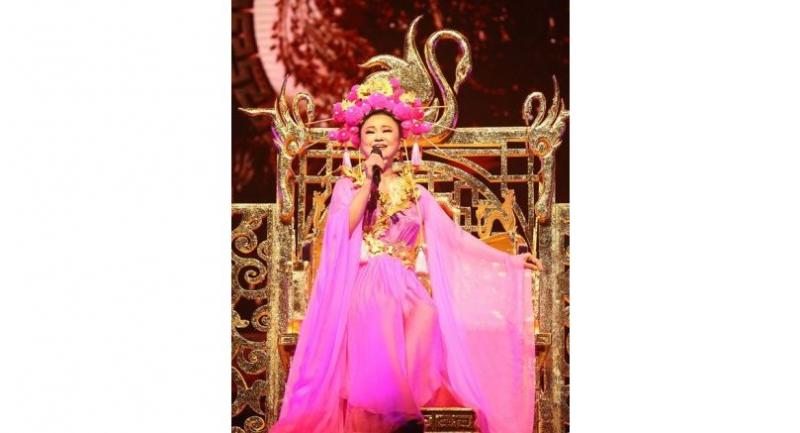 Jennifer Kim dresses up as a Chinese Empress for the opening of her “Diva Chinatown” concert.

Veteran pop singer Jennifer Kim proved she can still draw the crowds last weekend, quickly selling out all the tickets for both of her “Diva Chinatown” solo shows at Paragon Hall of Siam Paragon. Music from the Chinese opera was paired with scenes of Yaowaraj beamed on the screens to signal the start of the concert, with the curtains parting to reveal the 51-year-old diva clad in a pink dress sitting on a throne like a Chinese Empress. She started her show with a cover of Chiang Mai vocalist Kai Phannipha’s most successful song “Kularp Daeng” (“Red Rose”) from 1994 then segued into Chinese songs “Zhi Dao Shao” and “Yue Liang Dai Biao Wo De Xin” by Teresa Teng, one of the most famous and successful singers to originate from the Mandarin-speaking world, who died in Thailand in 1995. “I’m supposed to be a diva. But, in fact, I’m just a Chinese woman who started by singing Teresa Teng’s songs and the soundtracks of Chinese action movies during as a child. But thanks to the love and encouragement of everyone here, I have managed to be on the stage for a long time,” Kim told the audience. As she prepared to perform her next set, Kim recalled how she has sung covers by Grammy artists for 10 years and now, for the first time ever, she was taking on numbers by RS Public’s artists, among them James Ruangsak’s “Mai Arj Plien Jai”, Anant Bunnag’s “Khor Raeng”, Honey Passorn’s “Rub Bot Mai Mai Mee Ther”, and Stone Metal Fire’s “Yom”.

Ben then came back out on stage for XL Step’s “Nueay Jai”, Pete covered Autobahn’s “Thon Dai Thon Pai” and Aof sang Fundee Funden’s “Muen Kham La”, before joining up for Whitney Houston’s “Run to You”. Each of them also duetted with Kim, with Pete pairing up for Joni Anwar’s “Yak Hai Roo Wa Rak Ther”, Aof for Nittaya Boonsongnern’s “Cham Khue Rao” and “Jeb Nid Diew” and Ben for Koong Tuansit’s “Thang Rak Thang Klied”. The segment wrapped with all of them singing Room39’s “Bok Tua Aeng.”

While most of this sixth concert featured songs from the 1990s, there were some contemporary numbers too. They came courtesy of the next guest, rising rapper Urboy TJ, who performed his EDM-oriented songs like “Wai Rai” (“Villain”) and “Khao Korn” (“Rebound”) before joining with Kim for covers of The Toys’ “La La Loy” and Wonderframe’s “Yoo Dee Dee Kor. The young rapper made the audience laugh when he said rather shyly that he was in the wrong place. Kim, who is one of the coaches for “The Voice Thailand”, invited three contestants, Bank, Nook, and Fangkhao to show their talent in a medley featuring Ying Thitikan’s “Jan” and Maleehuanna’s “Saengjan” before Nook duetted with Kim on ActArt’s “Nok Jak Chue Chan.” Kim was back on stage with three Teresa Teng covers and her own hits, drawing loud applause for “Khid Thueng Ther Thuk Thee Thi Yoo Khon Diew” with saxophonist Koh Mr Saxman before bringing back Ben, Aof and Pete for a dance set and closing out the show with luk thung singer Jintara Poonlarp’s “Tao Ngoi”.