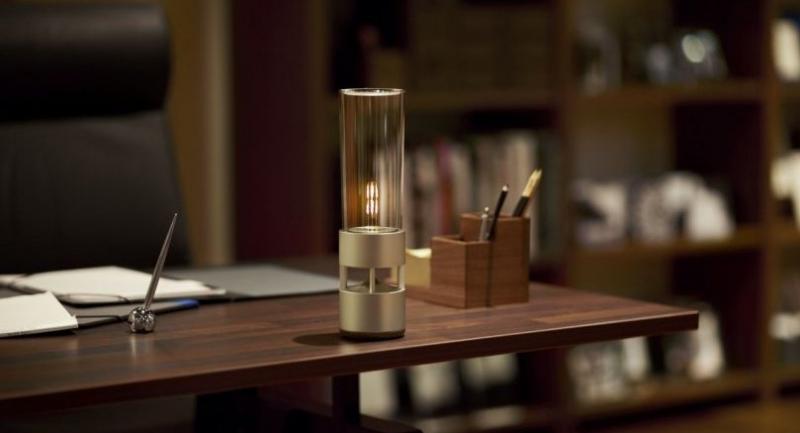 Sony releases a speaker that thinks it's a candle

A PORTABLE Bluetooth speaker that brings a touch of romance to any occasion, the Sony LSPX-S1 Glass Sound Speaker looks like a candle and sounds like a quality sound system.

With its four hours of battery life, you can use it as a candle or lantern for a romantic dinner while serenading the man or woman of your dreams with 360 degrees of ambient audio.

The illuminated LED can be turned off and has 10 levels of adjustment, using either an app or the control buttons under its base. At its brightest level, the S1 speaker’s LED produces the kind of soft light emanating from a candle or lantern. The S1 speaker is really unconventional with a tweeter made of an organic glass cylinder that produces clear highs. Sony’s newly developed technology delivers clear and authentic sound by using actuators built-into the bottom and middle of the glass cylinder to vibrate the organic glass.

The speaker comes with a 50mm woofer to produce a powerful midrange. The woofer is attached under the glass cylinder above the sound reflector at the base and above the Bluetooth indicator that resembles a pointed arch ignition.

The speaker’s translucent passive radiator is placed at the top of the cylinder to produce deep bass.

Sony advises owners not to touch the glass cylinder and passive radiator as the sound quality could be compromised.

The subtle design harmonises beautifully with any interior, while perfectly concealing where the sound is coming from.

And the speaker's solid aluminium body is made with Pale Gold Alumite, to deliver warm, high-fidelity audio.

The speaker has 16 watts of output power. The woofer has 11 watts and the tweeter 5 watts. This can easily fill your living room with loud music sounds and can equally be enjoyed outdoors though you need to place the speaker at close range.

Best of all, the S1 speaker supports Sony’s LDAC Bluetooth high-resolution audio codec that allows you to stream Hi-Res Audio music. Other supported codecs are AAC, aptX, and SBC. It wasn’t difficult to Bluetooth-link the speaker to my smartphone as both support NFC (near-field communication) radio technology. I simply tapped the “N” mark at the back of the phone to the “N” mark under the base of the speaker, and the smartphone prompted for connection.

I then used the Sony Music Centre app to conveniently control various function of the glass speaker. The app can be pressed into service to adjust the brightness of the illuminated LED, and set the sound quality, the Bluetooth codec as well as the sleep timer if you want to go into sleep while listening to music.

The speaker’s minimal design doesn’t provide many control buttons and those it does are concealed under its base so the app is really useful.

You’ll find the buttons for raising and lowering the brightness under the base alongside volume buttons and a Sleep Timer/Pairing button as well as reset button. You simply press the Timer button briefly to set the sleep timer or press and hold to turn on pairing mode. The reset button clears the settings.

There is also a Speaker Add button that is used to add another S1 speaker to create stereo sound. This can be done more conveniently with the app. The S1 speaker also has an audio-in jack on one side of its base beside the power button. You can use a commercial stereo mini to stereo mini with no resistance to connect an MP3 player to the speaker if the player has no Bluetooth function.

The speaker can be used with either the AC adapter or the built-in lithium-ion rechargeable battery. The battery can last about four hours and when the battery is low, the on/standby indicator will flash slowly in red.