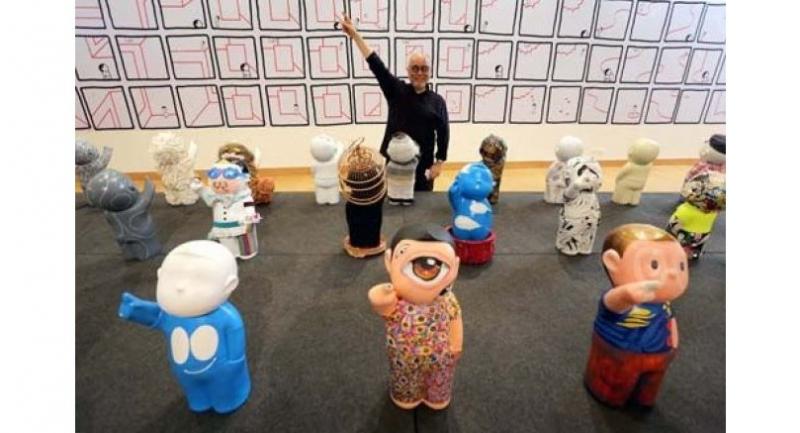 Artists, actors and politicians are joined by members of the public and children in sharing their thoughts

“Every day looking up, what?” That’s the catch phrase of Tian Tian, a boyish figure created by renowned Hong Kong artist Danny Yung. Tian Tian represents curiosity and the desire to learn and explore. He always looking up and asking, “What is up there?”

Now he has his very own exhibition here in Thailand. “Tian Tian Xiang Shang: Art is Learning, Learning is Art” is designed as a creative cultural exchange and has been organised by the Bangkok Art and Culture Centre and Zuni Iconsahedron with support from the Hong Kong Economic and Trade Office in Bangkok. It’s on display until April 12 at the Culture Centre’s main gallery on the eighth floor. Yung, who is serving as the artistic director and curator, says his inspiration came from the Chinese idiom, “Tian Tian Xiang Shang” meaning “Everyday looking up”. During the 1950s at the front gate of every primary school in China, these four ancient Chinese characters were a common sight. Initiated by Mao Zedong, their aim was to instil a spirit of self-reflection and self-improvement amongst the students.

“To me ‘Tian Tian Xiang Shang’ is an abstract term. Everyday looking up, what? I created a blank statue shaped like a boy looking up and invited everyone to fill it in as they saw fit so that the discussion could start. The idea of a young kid having curiosity is very important. That’s why I do many workshops with children,” notes Yung, a creative and cross-cultural advocate and a pioneer in contemporary art as well as one of the most influential artists in Hong Kong. Over the past 40 years, he has been actively involved in various fields of the arts, including theatre, cartoon, film, video, visual and installation projects that have toured more than 30 cities. He is the recipient of several awards, with his “Tears of Barren Hill” earning him the Music Theatre NOW Award from Unesco’s International Theatre Institute. The original comic of Tian Tian by Yung

The Bangkok exhibition presents almost 200 Tian Tian figurines created by artists from Hong Kong, Singapore, Japan, Canada and others. Almost half of them have been created by Thai artists and creative people in various fields, among them Patravadi Mejudhon, Dow Wasiksiri, Pratarn Teeratada, Pichet Klunchun, Twitee Vajrabhaya Teparkum, Nakrob Moonmanas, Netiwit Chotiphatphaisal and representatives of political parties. All this month, visitors to the show, and children in particular, are invited to create their own Tian Tian figurine in the workshop. “The ‘pointing’ comes from the body language of babies. Since infants can’t speak, they point to indicate that they want something. So I use pointing as an international language. And I also use ‘looking up’, which is related to young children too. They always look up and point. That’s the basis of the statues. Looking up and pointing, what are you looking at? Are you pointing at … your boss, your prime minister, God, a parent, a teacher, or maybe a bird, a plane, a cloud? I think it is a good exercise for us to learn about many things,” the artist explains. “I like the children’s work here the best. They don’t pretend, they do just whatever they want. You can see how they handle the mouth, eyes, and how they dress the statues. One of them dressed Tian Tian like a monk, another like a skeleton. I always find children’s work very honest,” he adds.

Tian Tian started back in 1970 when Yung drew the conceptual cartoon character that personified a little boy. His white three-dimensional body represents a blank piece of paper full of possibilities before developing into three-dimensional figure. Among the exhibits is a series of nine-frame artworks created by Yung as part of a collaborative collection with Hong Kong artists and celebrities including filmmaker Tsui Hark, fashion designer Vivienne Tam and comic  illustrator Alice Mak. “The nine-frame is dealing with positioning, spacing, and also orientation. Like the little boy who looks at the right or the left, you start to wonder what he is looking at. In one frame you only see the feet. A lot of them deal with audience positioning as well. People can write draw on them to express their thoughts, ideas, and emotions. It represents a platform for discussion, engagement, and creativity,” he says.

“In his contribution, choreographer Pichet is talking about absence. He makes it seems as if the statue was stolen and he reported it to the police. Another artist carried Tian Tian all over Thailand and took pictures, bringing a photography exhibition to the project.” “I’m so glad that art is interactive and collaborative. I think creativity triggers more creativity. Interaction and collaboration are the most important parts of making art. I’m glad too that the collection has been created by not only by artists but also politicians and teachers. It’s like ‘you do one, I do one, we are equal and let’s see what you have to say’. You can see that politicians have written their slogans and are using Tian Tian to promote their election campaigns. Some of the art institutions have used Tian Tian to promote themselves. It’s really funny and even though it’s like advertising, it’s okay. A media writer from Thailand had her work censored so she writes her feelings in curses on the statue. This kind of artwork is evolving.”

Some of the highlights include a recreation of Tian Tian by Patravadi “Kru Lek” Mejudhon. “I was probably one of the first people in Thailand to get to know Danny Yung. That was more than 15 years ago. My Tian Tian is like my student. I dress him in the Patravadi School’s uniform with a garland attached at the left ear because we are performing artists. Children look into the future. I’m very impressed by Danny’s freedom of thinking. He is inspiring and stimulating. He makes things look so simple yet they are actually very deep. He is a very good adviser especially on living culture.”

Artist and ceramist Wasinburee Supanichvoraparch explains that his artwork responds to the Thai belief that praying to sacred images will make a wish comes true. “To me though, success come from your own actions not from waiting for someone or something to grant it,” he says. Smadar Shapira, deputy chief of mission at the Embassy of Israel, says of her creation: “Last week Israel launched a spaceship to the Moon. I wanted to connect the past to the future. This figure’s dress and the coin are inspired by ancient times but he is presented as a modern scientist with the hashtag #Israeltothemoon. The spaceship is scheduled to reach to the Moon in April. So that is the big news in the science world but I wanted to somehow relate it to our culture,” she explains.

Yung has the last word. “Whatever you do, reflect on who you are. Then you can study through this art how people are talking about themselves, their society, their experience. Are they commenting, criticising, or what?”

Tags:
Tian Tian In their