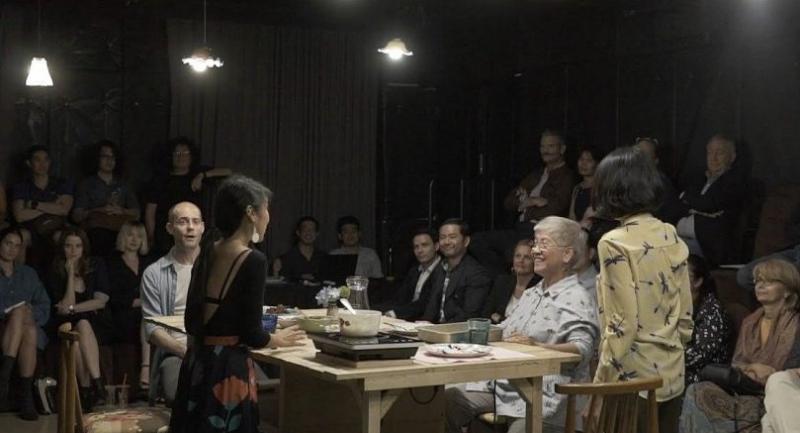 A new comedy delights both Thai and expat audiences

MANY of us who have lived overseas will have heard of, if not visited or participated in, the so-called “Thai Festival” or “Thai Evening”, a series of cultural events organised by Thai embassies in cooperation with Tourism Authority of Thailand’s overseas offices, Thai businesses in respective cities, Thai students organizations, and so on. What we almost always expect at these do’s are classical Thai dance and music performances and a Thai food cooking demonstration. My stomach says I should never have any problem with the latter. For the former, I recall talking to an Indonesian dancer who was hired to watch a DVD of classical Thai dance and then perform at a Thai festival, as it was cheaper than flying in a Thai dancer from Bangkok!

Thanks to an initiative by the Portuguese ambassador to Thailand Francisco Vaz Patto, a contemporary Thai play “My Mother’s Kitchen” will also be presented at the Thai Festival in Lisbon this June, in addition to the other usual programmes of course.

Written by seasoned playwright Jaturachai Srichanwanpen, the thoroughly delightful 70-minute comedy is in Thai and English, with English and Portuguese surtitles. It’s set in a kitchen and dining room and features three Thai women of three different generations, two of whom are in a romantic relationship with foreign men. The 25-year-old O (Nualpanod “Nat” Khianpukdee) brings her boyfriend Andre (IATC Award-winning British expat James Laver) to her 75-year-old grandmother Mon’s (veteran actress and scriptwriter Nalinee Sitasuwan) to surprise her, despite her 45-year-old mother Da’s (Parida Wongrabieb) disapproval. The comedic twist starts when, using Mon’s secret recipe hand-written in her notebook, Andre tries to make the Portuguese-inspired Thai dessert thong yip, only to get the recipe covered in egg yolk. And the fun continues until the end when another foreigner Carlos (Kevin Colleary) shows up with a rose. “Mother’s Kitchen” premiered last year in the Portuguese residence’s kitchen and was restaged two weeks ago at Siam Pic-Ganesha Centre of Performing Arts, where set and lighting designer Paphavee Limkul managed to recreate the scene of the kitchen. With the audience surrounding the acting area on all four sides, it made for a very intimate and warm setting.

Credit is also due to IATC Award winning director Pattarasuda Anuman Rajadhon, who set the right pace and tone to the play, although she clearly needed more time to better hone the different acting styles of her cast members. In such a small studio theatre, some were less natural than others.

Part of the celebration of the 500 years of relations between Portugal and Thailand, “My Mother’s Kitchen” is a good representation of contemporary Thai theatre as it focuses more on the people, as any good play should, than attempting to bluntly promote cultural exchange. The play, in Thai, English and Portuguese, was also published and available at the door and this made it great for both drama and Portuguese language classes.

“My Mother’s Kitchen” can next be seen at Maiiam Contempory Art Museum in Chiang Mai from June 14 to 16, then at the Portuguese capital from June 28 to 30.

Find out more at Facebook.com/NUNiProductions