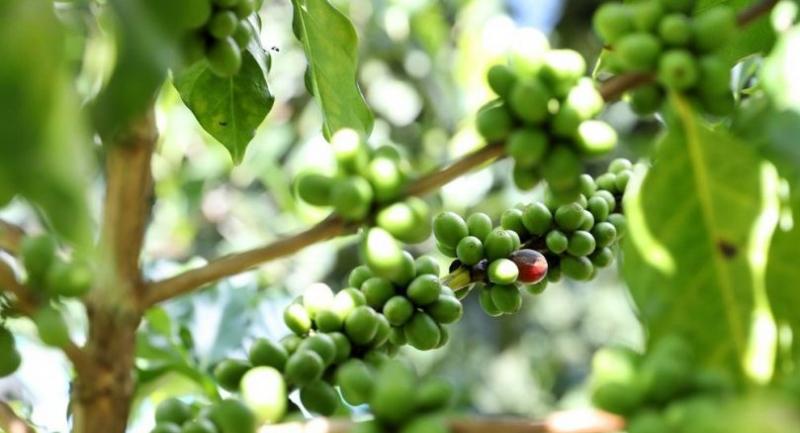 Beans from Baan Nong Lom are used in Cafe Amazon’s strong coffee now being served to passengers on every Thai Smile Airways flight.

Perched high in the hills of Chiang Mai’s Chom Thong district on Doi Inthanon, the small village of Baan Nong Lom has reason to stand proud.

That wasn’t always the case though. Fifty years ago, this impoverished settlement, much like the hamlets around it, was home to fields of opium poppies, its residents labouring to care for the attractive but insidious crop so as to be able to eat. It did however boast the only coffee plant in the entire province. In 1974, His Majesty the late King Bhumibol Adulyadej paid a visit to the village while on a tour of Thailand’s north and changed its fate forever.

“Phor Luang [the king] saw the poverty and hardship in this village and asked me how they lived and whether they grew enough rice for their own consumption. I explained that they worked as labourers. When Phor Luang heard that this village had a coffee tree, he insisted on walking along the trail to see it. He told us we must take good care of this coffee plant, which came to the village via a missionary, so we could collect the seeds and give them to other villagers to plant,” recalls Bunthong Kajeewongwilai, former headman of Baan Nong Lom. A poster in the Baan Nong Lom village shows the late King Rama IX looking at the first coffee plant in 1974.

“We had little success with the coffee plantation at the beginning because we didn’t have the skills or the possibilities for marketing the beans. Phor Luang told us not worry about it, predicting that many more Thais would turn to drinking more coffee within the next 10 or 20 years,” he adds.

King Rama IX encouraged the villagers to plant coffee bushes to replace opium poppies and took some coffee beans to the royal project for research. The government turned its attention to development of this area and the quality of life gradually improved. Today, Baan Nong Lom is a strong community growing a variety of vegetables as well as coffee and has launched a community-based tourism project. Most importantly, the villagers live a sustainable lifestyle. The villagers show off their coffee beans.

During our visit, we are shown the way the coffee is harvested and processed by Tan, the nephew of a 78-year-old hilltribe resident known as Phayo Taro who greeted the King that year and accompanied him to observe the village’s sole coffee plant.

“The process of Arabica has seven steps. The first step is removing the beans from the fruit after picking the ripe coffee cherries. The second step is soaking the beans in water for a day or two. Any that float to the top are either hollow or are unhealthy and defective beans so can immediately be removed. The third step is removing the pulp from the cherries. The cherry skins are used for making the compost for the foundation’s vegetable plots. After that, the beans are soaked again then dried in the sun for seven to 14 days,” Tan explains. A few years ago, the Royal Project Foundation signed a Memorandum of Understanding (MOU) with the PTT to jointly implement the “Research and Development Project for Coffee Cultivation and Production in Natural Resource Conservation System for Sustainable Development”. The project, which ran from 2014 to 2017, had four main objectives. The first was the study, research and development of Arabica coffee cultivation and production technologies of the Royal Project Foundation for internationalstandard qualification; the second was supporting and promoting coffee cultivation along with natural resource conservation and the third, developing and promoting occupational skill competence in coffee cultivation and production for hilltribe farmers. The last objective was to encourage villagers to participate in self-development and become a strong model community with economic stability and a sustainable society according to the sufficiency economy philosophy. This year, the Arabica coffee beans from the Royal Project Foundation will be enjoyed by a much wider group of coffee lovers, both here and overseas, thanks to a partnership between Thai Smile Airways and PTT Oil and Retail (PTTOR) that brings a typically strong Cafe Amazon coffee to all passengers on every flight.

“We selected Cafe Amazon because it’s a Thai brand and the project is a collaboration between Thai Smile and PTTOR, which are both state enterprises. We are also delighted to take a Thai brand and make it better known to the global market,” says Charita Leelayuth, acting chief executive officer of Thai Smile Airways. “PTTOR focuses on sustainability and has several community-based CSR programmes dealing with production. Cafe Amazon has many coffee sources but we have chosen to collaborate with the Royal Project Foundation. Our visit to Baan Nong Lom has shown us that villagers grow and produce coffee sustainably, which matches the objectives of both Thai Smile and Cafe Amazon.

“We fly regularly across the region including to Cambodia, Vietnam, and Laos where Amazon already has several branches. Amazon is very popular in Cambodia with more than 100 branches. So joining up to bring the rich taste of strong coffee to all our passengers makes a lot of sense. Some passengers will get to taste Amazon coffee for the first time on our flight.”

“But having a coffee brand on board isn’t as important as having the same objectives and government cooperation. We didn’t select this coffee brand just because it is from Cafe Amazon but because we have the same vision and want to cooperate with government in making community life sustainable,” she adds.

Cafe Amazon currently has 2,450 branches here in Thailand and a further 200 spread over Laos, Cambodia, Philippines, Myanmar, Fukushima in Japan, and Oman. Cambodia has the most with 111 branches and with the country’s economy growing and people having more money to spend, they are doing a roaring trade. Today, Cambodians from all walks of life  family and teenagers consider Cafe Amazon coffee the No 1 coffee brand. Executives Charita and Jiraporn are a picture of concentration as they learn how the grain moisture tester is used to measure parchment.

“We have, as you would expect, conducted customer surveys and interviews and adjusted the taste and strength of the coffee accordingly. We are now planning to expand our business to China and are sending a team there to work on the flavour that will best suit Chinese consumers. The Chinese are known for their love of tea, but coffee drinking is a trend and one that’s growing fast. We will start in the south because its culture and traditions are similar to those of Thais. We are also looking at Shanghai. This year, we will open three Amazon branches in Singapore in such prime areas as the airport and shopping malls. And here at home, we are always looking at creating new products and improving our services, both of which are vital to attracting new customers,” says Jiraporn Khaosawat, chief executive officer and president of PTT Oil and Retail Business.

Jiraporn confirms that the Thai love of coffee is growing stronger. “We undertook a comparative survey on how many tonnes of coffee are consumed in a year. Thailand came in lower than Vietnam but revealed massive growth. Coffee consumption is now part of Thai people’s lives.”