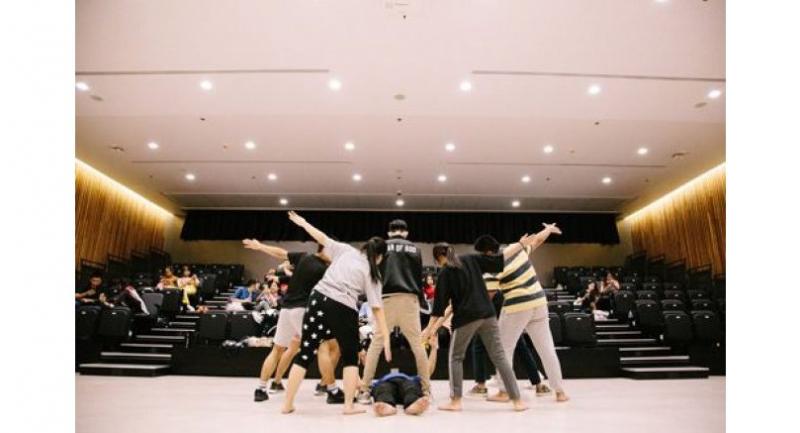 “West Side Story, School Edition” will be staged at the Music Auditorium of College of Music, Mahidol University from March 22-24 at 7pm.

With its timeless songs, “West Side Story” needs little in the way of introduction to global audiences. Considered one of the greatest musicals of all time, it has won multiple Tony and Academy awards (Oscars) winner and is soon to become another of Steven Spielberg’s latest cinematic adventures.

Now the Young Artists Music Programme (YAMP), the high-school division of the College of Music, Mahidol University, has become part of that rich history as one of the very first schools in the world to be awarded performance rights by the Music Theatre International (MTI) for its upcoming show of the musical’s student edition. YAMP students are practicing the part of their singing.

A musical in which a twentieth-century Romeo and Juliet are involved in New York street gangs, “West Side Story” is set on the harsh streets of the upper west side, where two gangs battle for control of the turf. The situation becomes complicated when a gang member falls in love with a rival's sister.

All authorised performance materials for this production – the music by the great Leonard Bernstein, lyrics by Stephen Sondheim, written and cocreated by Arthur Laurents, and Jerome Robbins’ original choreography – are supplied by Music Theatre International. Students from Young Artists Music Program (YAMP) are making a rehearsal for performing at “West Side Story, Student Edition.”

“It’s not easy to be granted license for musicals in Asia and we had to wait some time to be, as far as I know, the first school to finally be given the rights by MTI in New York,” says YAMP Principal Richard A Ralphs, who also directs this production.

“‘West Side Story, Student Edition’, is not that different from the full version. There are only a few minutes of music cut and the script is actually all the same. It is a very difficult and demanding musical. There is a lot of 1950’s New York dialogue; the music for both actors and musicians is extremely tough and the dance has to fit seamlessly into the whole production. Of course for many of our students, the hardest part will be working on dialogue. It’s hard for professional actors so you can imagine how difficult it must be for nonnative speakers. Students from Young Artists Music Program (YAMP) are making a rehearsal for performing at “West Side Story, Student Edition.”

“That said, our students have passion and are willing to put in the hard work to make the whole show come to life. Our voice teachers, faculty, staff and many alumni have willingly given extra time to help the students go beyond what they can currently achieve. They cannot make a professional international standard performance, because they are not yet professionals. But they can have a professional attitude, learn professionalism and create something very powerful to share with our community. This is the aim of this production.”

But “notyet professional” does not mean “lacking experience”. Many of the students, both in the orchestra and cast, have won national and international awards. Witchaphon “Pete” Onprapai, a Mathayom 6 student who alternatively plays Tony and Riff, is lead singer of the band Lingrom, a finalist of Hotwave Music Awards 2018. The leading lady, Maria, is played by Phatchalarwaree “Jasmin” Damrongthamprasert, has more than 300,000 subscribers on YouTube and was featured in a Dreambox production of “Son, A New Musical.”

- “West Side Story, School Edition” will be staged at the MACM, College of Music, Mahidol University, Salaya from March 2224 at 7pm.

- Tickets are from Bt500 to Bt1,500. For more information and booking, please visit Facebook page: YAMP Voice Production or bit.ly/YAMPWSS