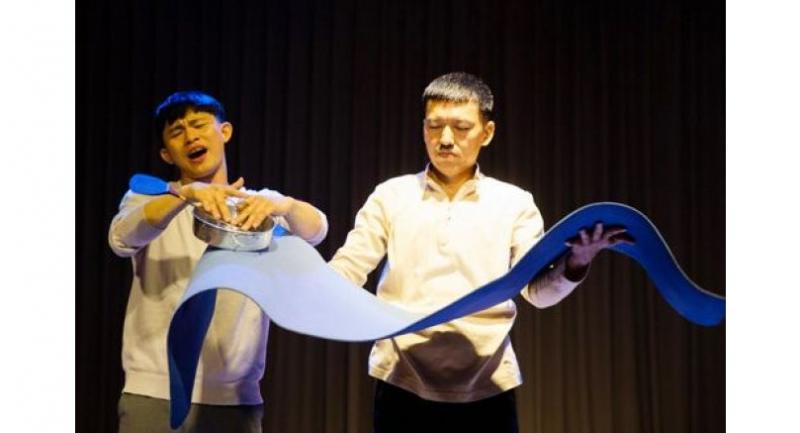 Household objects morph into various characters in a heartwarming show

It’s now summer break for most schoolchildren, and parents need to find some quality activities for them. Enrolling them in cram schools or special skill workshops is a popular choice but there are also others from which to choose.

Many theatre performances have specific, or recommended, age groups for spectators who would not only enjoy but understand them fully, and it’s hard to find one that kids and parents can equally enjoy. At the beginning, the audience saw many familiar household objects spread around the performance area. Nikorn and Ta introduced themselves and reminded us that this wasn’t their first collaboration, noting that Babymime’s first two eveninglength productions were directed by Nikorn. Ta added, to smiles and applause, that more than 20 years ago Nikorn studied object theatre when he was trained at Paris’s Ecole internationale de theatre Jacques Lecoq, and didn’t want to forget how to do it and so we were getting to see this show now. Shortly afterwards, while they, and special guest performer and Babymime member Tongglur “Glur” Tongthae were clearing the stage, the audience listened to HM King Bhumibol’s “Yim Su” (“Smiles”), which set the right tone for the subsequent 80-minute performance. In short and long scenes of different stories, Nikorn and Ta took us on a journey filled with creativity to a variety of places from a living room, an office, up into space and down under the sea. They used only the household objects we had seen earlier, ranging from sandals and a yoga mat to a spray bottle and vacuum cleaner hose and ingeniously blended them with their voices and physical movements.

Unlike object theatre works by artists who dedicate their whole career to the genre, this work was slightly short of being magical. Nonetheless, our laughter was frequent and our smiles almost nonstop. Among the most memorable moments was when three children from audience helped Glur, who also introduced each scene, clean up the stage. I’m also certain that most, if not all, of the kids in the audience that Sunday evening would continue to exercise their imagination by turning their household objects into different characters, and hopefully cleaning and clearing them afterwards. And that’s yet more proof that, in an age when many kids are glued to online games and we adults are bombarded by the visuals in our daily lives, both the young and the not-so-young need performances like “Play Around Objects” more than ever. It’s also noteworthy that while the main theatre at this downtown performing arts centre is dark most evenings, its small studio, which doubles as a rehearsal room, is getting busier. Theatre-goers have watched two very different works there over the past few weeks. That’s a reminder that Thai theatre makers are producing more smaller works than larger ones; and a warning to those who are planning to build large playhouses, believing that it would support the development of contemporary theatre.

- Toh Gloam Television will restage “Chai Klang: The Musical”, their comedic hit from 12 years ago, with new cast members at the venue’s main theatre, starting May 25.

- For more details, check out Facebook.com/KBankSiamPicGanesha.