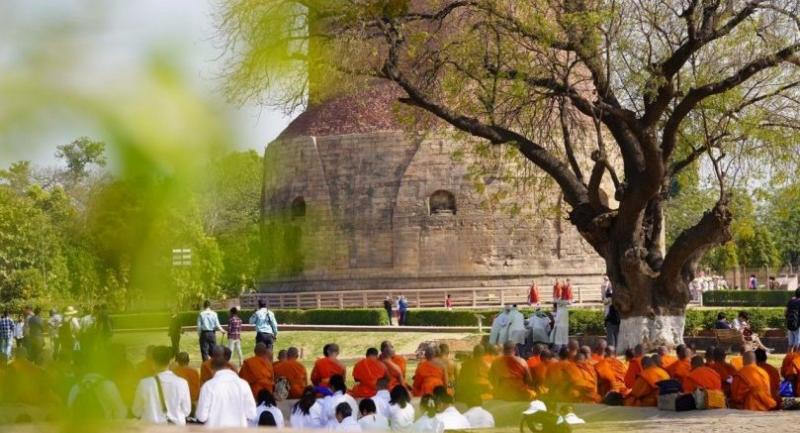 MORE THAN 100 Thais, mostly monks, travelled to India and Nepal earlier this month to visit the four main holy sites of Buddhism.

The annual pilgrimages, punctuated by prayers, chanting and meditation, take in Lord Buddha’s birthplace and the sites of his enlightenment, his first sermon and his death.

“Lord Buddha said the souls of people whose faith grows after visiting these holy sites would move to a blissful realm on their passing,” said Phra Khru Palat Chalermchart, a Dhammaduta (Buddhist missionaris) at Wat Thai Buddhagaya , a dharma guide on the trip. The pilgrimages offer several opportunities for spiritual development, he pointed out, such as the place of Buddha’s passing, a vivid reminder that no one can escape death. The remains of ancient Valshall in Kalhua

The founder of Buddhism was born Prince Siddartha Gautama in Lumbini in present-day Nepal more than 2,600 years ago, but abandoned his life of privilege in his father’s palace to seek the meaning of life, which he realised for most people entailed great suffering.

After trying various paths to find the answer to life’s mysteries, he achieved enlightenment while meditating by himself under a bodhi tree in Bodh Gaya.

The Enlightened One soon after delivered his first sermon at Varanasi (Benares).

At age 80, he died in Kusinagara, reaching the state of Nirvana. The Thai calendar traces back to that year.

Most Thais are Buddhists and Thailand is considered the world’s largest Buddhist nation, yet none of Buddhism’s four main holy sites are in Thailand.

“And we need to nurture religion if we expect it to be a unifying force,” he said. His department’s Buddhism Promotion Fund has been arranging the trips to the holy sites for much of the past decade. Monks are chosen based on their dedication to promoting Lord Buddha’s teachings.

“These monks have been on the front line in propagating the teachings, and taking them to the holy sites lets them see more so that they can teach more,” Kitiphan said.

Asked if the overseas trips served as rewards for the monks, he said, “Yes, in a sense. And all the chosen monks really deserve it.” Kitiphan said his department strictly screens the monks’ profiles before deciding who should be invited on a pilgrimage.

“Many are still relatively young, but this is good. What they learn on the pilgrimage will keep them devoted to Buddhism for a long, long time.”

Phra Sompoch, 35, from Wat Dakkanon in Chai Nat’s Muang district, said he planned to share all that he had seen with novice monks.

“I supervise about 20 young novice monks. I hope they grow up to be good monks in the future,” he said.

He believes he came to understand Lord Buddha better after seeing the poverty and other difficulties that Indians endure.

It was human suffering that motivated Prince Siddartha more than two millennia ago to seek solutions. His enlightenment and his teachings formed the basis for Buddhism, one of the world’s major religions. Phra Sompoch has been a monk for 10 years, during which time he’s led dharma classes and supported summer-holiday ordination periods for boys.

Although most of the pilgrims on the Buddhism Promotion Fund trips are monks, others are officials keen to delve deeper into the religion.

Dr Araya Boonyaleephan of Rajavithi Hospital said she was not a firm believer in Buddhism before her first visit to India. “But after learning more about Lord Buddha’s history, my heart became more contented,” she said while enjoying her second tour.

The first time included a one-week assignment working at a medical centre in Kusinagara. She found life in India lacking in conveniences, but it didn’t stop her from seizing an opportunity to return.

“I’ve realised here that happiness doesn’t come from wealth – it’s more about what we think, about our perspectives,” Araya said. “We can grow happiness in our own hearts.” Monks and white-clad laypeople cover a Buddha statue with a saffron sheet.

Netnapa Parnmon, who works for the Moral Centre, had applied to join pilgrimages five times previously and finally got accepted on her sixth attempt.

She felt increasingly grateful for the opportunity as the tour progressed because her heart was at peace.

“I’m calm every moment,” she said. “At every holy site I see people from different countries and different sects. They may come from different places, but they share the same religious goal.”

The ultimate goal in Buddhism, recognised by people of all creeds, is nirvana – the complete end of suffering and escape from the cycle of death and rebirth.

Prayers along the way are recited in a variety of languages, including Pali and Korean.

People from around the world meditate together at Kusinagara

“South Koreans make up the biggest group of pilgrims to India,” said Phra Palat Suchat, a Dhammaduta, or dharma teacher. “Coming next are people from Myanmar, Cambodians, Vietnamese and Japanese.”

Kitiphan said his agency’s preparations for every pilgrimage include budgeting a Bt100,000 donation for each of nine temples built by Thais along the routes linking the holy sites.

For the pilgrims, these are also rest stops – places where they can find shade for prayers and paths for meditative walks.

“We need to maintain these temples. Otherwise the holy sites might eventually be ignored too,” Kitiphan said.

The temples, moreover, serve to promote Buddhism, Thailand and the Thai people, he noted. Thais established Wat Thai Kusinarachalermraj in 1994 in honour of His Majesty the late King Bhumibol Adulyadej.

In 2000 the temple began offering its neighbours low-cost medical services. When the moon is full, there’s no charge at all for medical aid, and a huge number of people arrive. The temple currently has three doctors and many other health professionals supplying the services.

“It costs us 10 times more than the fees received, but we can keep operating our so-called Thailand Clinic because of the donations flowing in,” the abbot said. The temple has also supported 27 area schools, he added. Its beneficence has earned it official recognition from the Indian government.

“We are considered a hotspot!” the abbot said. Prayers are offered at a monastery.

Phra Palat Chalermchart said the temples lining the routes between the holy sites – such as the Kusinagara-Lumbini route – make sure that pilgrims needn’t worry much about the country’s general lack of public toilets.

“I know many people are afraid to come because they’ve heard that pilgrims sometimes have to answer the call of the nature in open fields along the way. But now there are many temples and centres providing the necessary conveniences,” he said.

Phra Palat Chalermchat is among the many dharma speakers who are on hand at the centres ready to educate pilgrims about Lord Buddha’s life and teachings.

“We are well trained to deliver sermons that suit different age groups. The knowledge we share will strengthen their faith and be useful in their daily lives too.”

Kusinagara was the site where Lord Budha achieved nirvana.