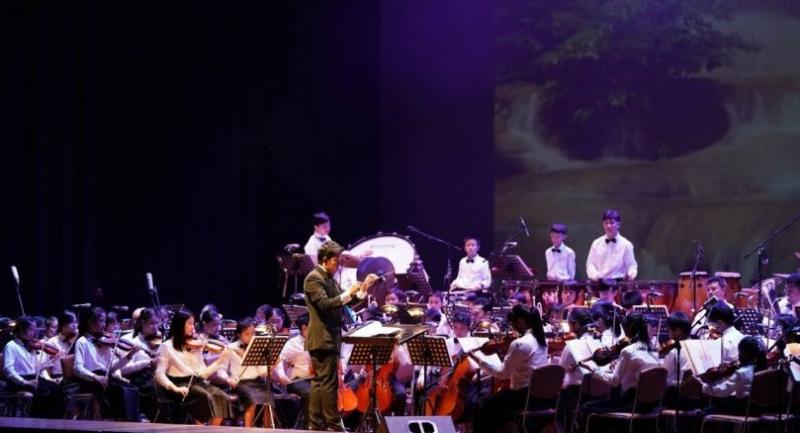 Bangkok’s Roong Aroon School clearly has too much talent among its young students to contain within its own walls. The recent semester-ending charity concert “More Than Music” had to be held at the Thailand Cultural Centre. And the large and enthusiastic audience got a full reckoning of the high-quality talent built through the school’s music, dance and theatre programmes, which rely on a “Learning by Doing” principle. Getting the kids out in front of a real audience in a professional-quality venue was fundamental to that concept. More than 1,000 students from kindergarten to high-school age performed, backed by the RA Pop Orchestra and an ensemble of traditional Thai instruments. Music teacher Pititham Thamsri conducted the orchestra through an impressively diverse repertoire of classics such as “The Tale from Sai-Yok”, which His Royal Highness Prince Narisara Nuvattiwongse composed in 1888 in tribute to the natural beauty of Sai-Yok Waterfall in Kanchanaburi. Colonel Prateep Suphanroj rearranged the harmonics for the orchestra. The orchestra ably accompanied the youngest of the students, whose own enthusiasm the school encourages by giving them songs that are just plain fun to sing. Pupils from kindergarten to Grade 3 gave a rousing rendition of “Kong Kwan Jak Thammachart” (“The Gift from Nature”), which captures all the fun of growing their own plants and cooking their own meals. While this and five other tunes with meaningful lyrics were sung, dancers just as youthful swirled around. “The Papaya’s Story” might have been a little too complicated in its arrangement for primary-school children. It put the chorus and dancers through three segments – “Shake the Papaya Down”, “Somtum Poem” and “Somtam” – all composed by Her Royal Highness Princess Maha Chakri Siridhorn. But the students were involved in mounting the presentation right from the outset and even including the choreography. The highlight here was “Burma Klong Yao”, with lyrics by National Artist Naowarat Pongpaiboon, a revered poet who as a guest of honour presented his poem “Butterfly”, accompanied on flute by fellow National Artist Thanis Sriklindee.

Students from years four to six put on quite a spectacle with “Cheevit Sam Pan”, which told the story of Bangkok residents sharing and cooperating and taking care of the environment. The high-school contingent closed the show with the band Wonder Quarter performing a mini-concert and others staging the short drama “Amado: The Beloved One”.

Prempridi Harntanong, who’s in charge of the school’s high-schoolers, explained that the show’s title, “More than Music”, referred to being able to put your trust and belief in someone who can thrive naturally on his or her abilities and ideas. “It’s like walking together holding hands,” Prempridi said. Teacher Komen Aorchaipom, director of the primary school, said the title expressed the happiness that arises when you develop your abilities in unity with others. “The kids don’t have to be the best performers – just be happy.”

And teacher Raewadee Dungsrikaew, director of the kindergarten, said that having every flower in a vase the same colour, it’s beautiful, but blends of pink, yellow, green and other hues would better reflect the nature of the annual concerts. “It’s beautiful music!” she said.

Special thanks to all volunteer photographers.