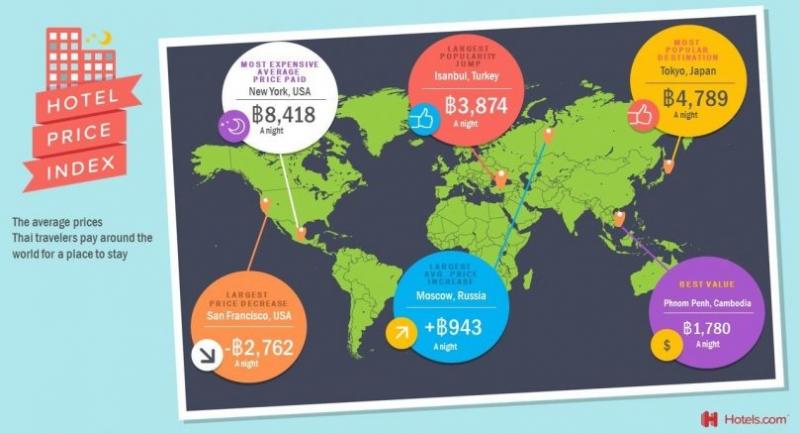 Research by Hotel.com has revealed a 3-per-cent increase in global accommodation prices, while Thai travellers last year spent Bt1,720 for domestic accommodation – a 7-per-cent decrease from 2017.

According to the latest Hotel Price Index (HPI) from Hotels.com, there is no sign of a slowdown for the global travel industry and last year Thai travellers paid the same average price of Bt4,437 a night for international accommodation.

The growth in travel comes despite uncertainty such as Brexit, the wildfires in California, drought in South Africa and earthquakes in Japan. Travellers also showed resilience and renewed confidence in destinations touched by unrest, among them Paris, Egypt and Turkey, regions experiencing currency fluctuations; South America, and areas affected by natural disaster; and North America.

“HPI has always given us a good barometer on the industry and an insight into global travel trends. This year we have seen growth despite a lot of political challenges and natural disasters, which indicates that the industry shows no signs of slowing down,” said Adam Jay, president of the Hotels.com.

With the HPI setting at 100 in its inaugural year, 2004, the index format allows Hotels.com to highlight year-over-year variations in actual prices paid per night by travellers without foreign exchange fluctuations distorting the picture.

HPI also reveals many interesting results regarding average prices and popularity of destinations among Thai vacationers travelled around the world in 2018 including:

Most popular destination – Tokyo, with an average price of Bt4,789 a night

Highest in popularity – Istanbul, Turkey with an average price of Bt3,874 a night

In addition to the great value destinations and hidden gems found in the HPI, travellers that haven’t padded their wallets with cryptocurrency yet, can take advantage of programs like Hotels.com’s Rewards, which lets them earn free nights while the sleep.