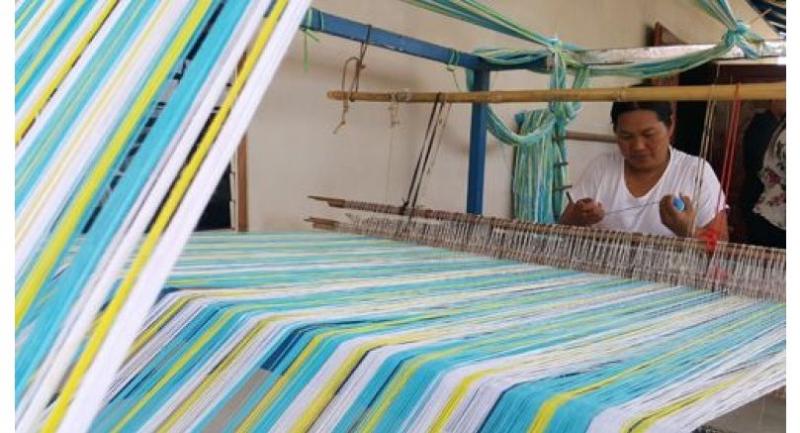 A villager demonstrates how to weave threads from the polo shirt collars before turning them into a blanket.

More than 20 years have passed since Her Royal Highness Princess Maha Chakri Sirindhorn expanded her programme of assistance to underprivileged people living in remote communities with the introduction of the Occupation Promotion Project.

Launched in 1995, the project was designed to develop the potential of rural folk by providing better and more opportunities for an occupation that drew on folk wisdom and local culture and provided them with parttime self-employment as a means to add to their meagre incomes. The first group to receive the support was a women’s group in Chachoengsao’s Nayao village and it was to here that a group of journalists recently travelled to see for themselves just how far the project has come. The groups receive ongoing advice, assistance, skills training as well as training in group management, finance and accounting from several government agencies, among them the Border Patrol Police, the Office of the Non-Formal and Informal Education, the Education Ministry, the Cooperative Promotion Department, the Cooperative Auditing Department, and the Department of Agriculture Extension to help them to continue to develop their professional skills. “This group was formed on November 28, 1995 and started producing shampoo. At that time, the princess visited the Baan Nayao Border Patrol Police School and asked us what we mainly grew in our area. We answered soybean and told her that because its price was so low, it was having a negative effect on our income. The princess then asked whether the soybean could be processed for human food as well as for animal feed. One of the people who had accompanied her said that it could be transformed into tao jiao [fermented whole soybeans] and see ngew khao [light soya sauce] and she told him to teach us how. Today, these products are our main goods. With the support of the princess, we have a processing building as well as equipment and materials. Previously, we left our homes and children for our parents to take care of and worked as labourers in the city after the farming season was finished for the year. But once we were able to earn money from our two products, we could stay home and we had enough money enough to support their education,” recalls Nuphruan Sawok, the accountant of the Nayao Samakkhi Farm Women Group. “This sewing women group was formed in 1998 and started by producing 500 student uniforms for the provincial Red Cross for three years. During the princess’s visit, she asked us to produce student uniforms for her Phufa project. But we didn’t still didn’t have adequate income to survive so the princess offered us the chance to produce bags, wallets and key rings from Pga K’nyau handwoven textiles. That later expanded to shirts. Today we have 34 members and we each earn between Bt3,000 and 4,000,” says Rayong Phuangthaisong, chief of the Baan Nayao Sewing Women Group. In the neighbouring village of Baan Thung Hiang, the housewives also turn to supplementary occupations after the harvest. They formed their group in 2001 and the members were trained at the Agroforestry Centre at Baan Huayhin in herbal processing for shampoo and dishwashing liquid as well as in food processing.

The Office of Princess’ Project suggested the group produce herbal tea and herbal compresses. They too later expanded their wares to include handwoven blankets. “Nowadays, we have two products – handwoven blankets and herbal compresses. Our main market is Phufa though we also sell to the community and at events. We have 18 members and 12 looms, Each of us works at home to the same pattern but with different colours. We send 150 blankets to Phufa every three months. They are priced at Bt220 and Bt250. Right now, we are thinking about new designs and about making other products. We earn from Bt7,000 to Bt10,000 per year. For the herbal compress, we learnt from several government units and acknowledge their help on the packaging,” says Waruni Chusri, chief of the blanket weaving group at Baan Thung Hiang. Interestingly, the colourful blankets with two horizontal and vertical stripes are made from threads pulled from polo shirt collars, which the villagers buy en masse from Khlong Rang 304 in Prachin Buri.

“Actually, the price of cotton thread is rather high – from Bt80 to Bt100 per kilogram. But, if we take thread from polo shirt collars, it works out to only Bt10-Bt25 per kilogram. These collars have been overproduced or damaged in manufacture,” explains Waruni.

“After we buy the collars, we first wash them with fabric softener, which makes it easy to pull the threads. The collars are covered in dust and have a musty smell to washing them is a must. We spin the thread with an ak, a wooden tool. If we are well organised, we can manage a handwoven blanket a day. The colours come from the threads in the collars; we don’t dye them. We use about 3 kilograms of thread for a blanket. For the herbal compresses, each of our members earns Bt25 per hour for collecting herbs, drying out herbs and wrapping them.” The members admit that over the last 20 years, they have learnt by trial and error, developing their products as they went along. Their blankets come in a standard size of 1.20-metre wide by 2.20-metre long and they, along with the herbal compresses, are sold at Phufa stores.