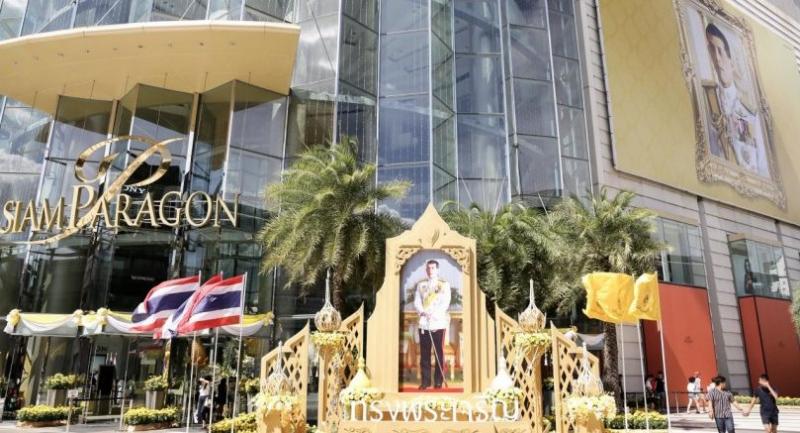 One Siam, as the three shopping complexes of Siam Paragon, Siam Center and Siam Discover are collectively known, has teamed up with government and the private sector to pay tribute to His Majesty King Maha Vajiralongkorn Bodindradebayavarangkun on the occasion of his Coronation.

Members of the public are invited to pay their respects to His Majesty all this month through a range of special exhibitions and activities. These are as follows:

- Exhibition: the Royal Coronation of His Majesty King Maha Vajiralongkorn at Siam Piwat Tower from May 2 – August 4

Organised by the Pid Thong Lang Phra Foundation, the Royal Project, the Thailand Convention and Exhibition Bureau and Siam Piwat, the exhibition features the royal projects that exemplify His Majesty King Rama X’s resolution to fulfil the wishes of His Majesty the late King Rama IX and work for the benefit of all Thais. These include water resources developments, public health care for the underprivileged, the royal initiatives on education, and the royal project “We Do Good from the Heart”.

- Garden of Royal Tribute at Parc Paragon, until May 1-3

- Decorating of the Royal Emblem at Jewel, M Floor, Siam Paragon, until August 4

The Royal Emblem is decorated with meaningful flowers in accordance with Hindu beliefs under which the Thai monarch is revered as the divine king, avatar to protect his subjects, their happiness and serenity. The flowers are the calendula symbolising prosperity and the dahlia, which refers to the fondness of the people for the Thai monarch.

- Decorating the Royal Portrait of His Majesty King Rama X with various species of yellow orchids and other flowers at Hall of Fame, M Floor, Siam Paragon, from Friday until May 8.

One Siam is inviting public to salute and offer well wishes to the King in this area decorated with orchids and other species of yellow flowers on a Thai traditional wooden fret structure.

Thais and foreign visitors are invited to view the historic event of the Royal Coronation Ceremony. The programmes are divided into three parts: the Preliminary Royal Coronation Ceremony, the Primary Royal Ceremonies, and the Final Royal Ceremonies. The broadcasts will be taken from the Television Pool of Thailand and are being aired on gigantic screens.

Organised by the Royal Thai Army in collaboration with Siam Paragon, the exhibition features His Majesty’s royal biography covering his childhood and his education, his time in the monkhood through to his being proclaimed the crown prince, and his enthronement as the monarch of the Chakri Dynasty. Royal Projects and royal initiates in various fields including medical, public health, education, social work, foreign affairs, agriculture, religion, sport, and military showcase His Majesty’s talents and generosity as well as determination to carry out the royal initiations of His Majesty the late King Rama IX in water resources, agricultural, and the sufficiency economy.

The public will be able to pay their respects and offer their wishes within the area and will receive the wristband inscribed “Rao Rak Nai Lhuang Ror. 10” (“We Love King Rama X”). Just 1,500 pieces are available.

Other activities include a music performance by The Royal Thai Army Band and a blood drive at Royal Paragon Hall on the fifth floor of Siam Paragon from May 13-16.