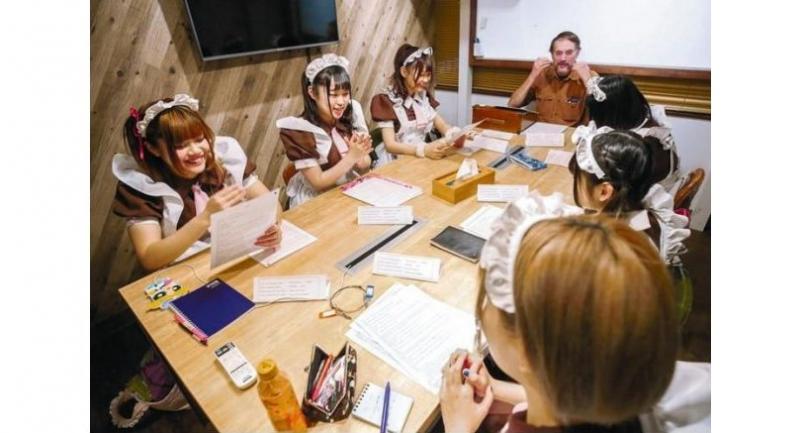 “Welcome home, master and princess.” Women working for a maid cafe learn English in Tokyo’s Akihabara district, which is known as a hub for otaku culture and attracts many foreign tourists. /Yomiuri Shimbun

IN A ROOM at a multiuse building in Tokyo’s Akihabara district, women in maid outfits are learning English conversation from a native speaker. They are employees of maid cafe management company Infinia, a company based in Chiyoda Ward, Tokyo, which requires new employees who dress and talk like maids at the company’s cafes to take 10 English lessons.

With an increasing number of foreign visitors coming to Japan and preparations for the 2020 Tokyo Olympic and Paralympic Games under way, many more people have recently begun studying English. According to the Yano Research Institute, the domestic market related to learning foreign languages has expanded to reach 866.6 billion yen (Bt251 billion) in fiscal 2017, from 789.2 billion yen in fiscal 2012. It is projected to further increase to 887.3 billion yen in fiscal 2018. “Welcome home, master and princess.” Women working for a maid cafe learn English in Tokyo’s Akihabara district, which is known as a hub for otaku culture and attracts many foreign tourists. /Yomiuri Shimbun

Share houses that provide residents with the opportunity to learn English in their daily lives have been built one after another. Irodori Factory, a shared house operating company based in Muko, Kyoto Prefecture, has developed such facilities mainly in urban areas. The company has allocated a certain number of rooms at their share houses for foreign residents, to foster international interactions.

Shoichi Kato, a 27-year-old employee of a trading company, is a resident of one such share house in Ota Ward, Tokyo. “Since I moved in, I have become more relaxed with foreign people,” said Kato. The school education system has also attached more weight to English-speaking ability. While the number of assistant language teachers (ALTs) is increasing in line with upgrading and expanding English education, alternative efforts are being made in local regions where foreigners rarely live, such as utilising information and communication technology.

A demonstration experiment using a robot for English education has been introduced at Meiji Elementary School in the city of Omuta, Fukuoka Prefecture. Although there are 19 elementary schools in the city, just one ALT is in charge of all them. The ALT is able to attend each school only once or twice per term. Masanori Yasuda, head of the city board of education, explained: “Hiring another ALT costs a lot and is financially difficult for us. Instead, we are exploring the possibility of using a robot to teach English pronunciation and conversation,” he added.