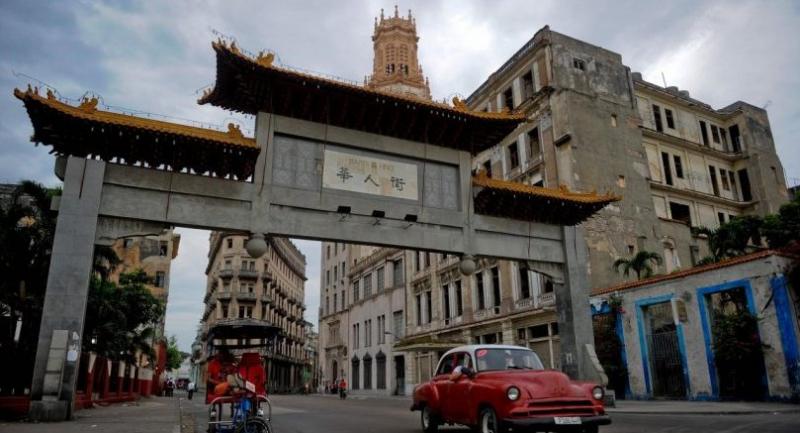 Districts including Chinatown will be spruced up ready for Havana’s 500th birthday and residents are keen to work with the authorities to restore a sense of former glory./AFP

Cubans of Chinese descent are fully assimilated, but they do have their own Havana neighbourhood

NESTLING ALONGSIDE Havana’s old town, surrounded by colonial buildings and swept by the exhaust trails of passing 1950s American convertibles, stands a large arch with an ornate roof.

It’s the entrance gate to Havana’s Chinatown, once the biggest in Latin America, whose residents are now dreaming of recovering its past glory.

This, taxi drivers joke, is the only Chinatown in the world without any Chinese, a testament to the assimilation of a migrant community that first arrived in Cuba in the middle of the 19th century. Districts including Chinatown will be spruced up ready for Havana’s 500th birthday and residents are keen to work with the authorities to restore a sense of former glory./AFP

“Since its creation, it was an open Chinese neighbourhood that produced this mix between the Chinese and the country’s original population,” says Teresa Maria Li, director of the local House of Traditional Chinese Arts.

Li comes from a family with a Chinese grandfather and a Spanish grandmother.

“First of all I feel Cuban, but deep inside I have the Chinese gene and I defend it vigorously, with a sense of belonging.” These are some of the last remaining Cuban residents who are 100 per cent Chinese. Their descendants have embraced the local culture, and are more Cuban than Chinese.

The first wave of Cantonese migration arrived in 1847 to work as “coolies” – agricultural labourers who replaced African slaves on the sugar plantations.

The next wave, though, had money and was fleeing discrimination and an economic crisis in California.

They built a thriving neighbourhood with hundreds of thousands of people, as well as restaurants and theatres.

But the migratory flow dried up with Cuba’s 1959 communist revolution. Fidel Castro met those fleeing Mao Zedong. They didn’t hang around. Dancers put on a show at the House of Chinese Arts and Traditions./AFP

“Calculating the number of descendants is impossible. There are first- to fifth-generation Chinese. Those fully Chinese – there are 121 in the whole island,” says Maria Teresa Montes de Oca Choy, Asian history professor at Havana University.

But once the Soviet Union fell and Cuba spiralled into an economic crisis in the 1990s, some old Chinese restaurants reopened, although like most of the city they remain run down.

With Havana celebrating its 500th anniversary, authorities have committed to restoring many parts of the city, including Chinatown.

As well as resurfacing the roads and improving street lighting, there will be traditional Chinese cultural activities too.

On Manrique Street, around 30 children are learning wushu – a traditional Chinese martial art. Next door in what was once a Chinese cinema, wushu master Roberto Vargas Lee wields a nandao (broadsword) as he teaches adults.

The grandson of Chinese citizens, he studied martial arts in China in the 1990s. His wife is from Shanghai and his mother was part of the former Cantonese Opera in Havana.

“Some people tell me I don’t look very Chinese and others ask me when I arrived from China. It’s like the Tao says – ‘Everyone can look at the same thing, but see it differently’.”

While Chinese-Cubans are just as spontaneous as the rest of the population, they are less likely to leave open their door for unexpected visitors.

“It’s true that there are certain cultural differences, but we’ve adapted to that,” says Carlos Alay Jo, a 60-year-old restaurant owner born in Cuba to a family from Guangzhou.

“We reflect a lot about things. We’re more reserved. There’s a mix,” he adds, quoting his father, who taught martial arts to several top-ranking officers in the Cuban army. Nearby at a printer’s, the next edition of the bilingual Kwong Wah Po daily newspaper, which began as a monthly 80 years ago, is being prepared.

Until recently it was printed on an 1849 American press – one of the oldest in the world – that was equipped with Chinese characters.

Times have changed, though, and the latest edition will be printed with modern methods, while there are no longer any fully Chinese members of the editorial team.

With so few fully Chinese people left in Cuba, Montes de Oca admits that renovating a “Chinatown without Chinese people” could be a fallacy, but she insists that the locals “feel proud of having had a Chinatown and would love to have one again”.