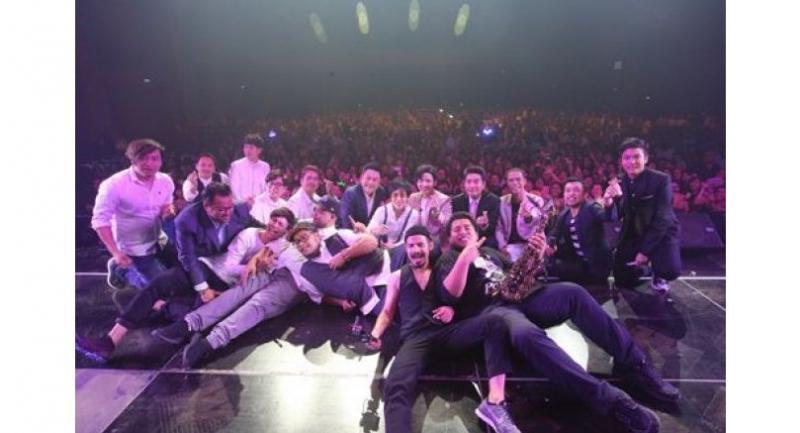 The eight artists and Neung Jakrawal and his band take a picture with the audience after the “Pink Park Eternal Love” concert.

Love was all around on Monday night, as members of the audience came together to sing along with their favourite love songs of different eras at the second edition of the “Pink Park Eternal Love” concert at Royal Paragon Hall. The predominantly female audience shouted out with sheer delight as their favourite artists brought 40 timeless love songs and medleys to life.

First out on stage was Moderndog’s Pod Tanachai who got the ball rolling with “Chuang Thi Dee Thi Sud”. He was followed by Kong Saharat with “Pen Yang Nee Tang Tae Kerd Loei”, Kob Songsit with “Patiharn” and Tom Isara with “Pen Thuk Yang” and a cover of songs-for-lifer Pongsit Khampi’s “Samer” with Ae Jirakorn before the latter let rip on “Jai Klang Kwam Roo Suek Dee Dee”. Distinguished producer and keyboard player Jakrawal “Neung” Saothongyutitham, who was also the music director for this concert, made a special request to Tom and Ae to sing a cover of Rang Rockestra’s “Khid Thueng” (“Miss You”) in remembrance of his mother, who died recently. Pu Anchalee thrilled with a series of her best-loved hits including “Nueng Diew Khon Nee” and “Mee Ther”, and talented pianist Tor Saksit took to his keyboard for “Rak Ther”, swapping the lyrics with some of Grand Ex’ “Rak Nai C Major” and “Yim Kor Phor”. Ice Saranyu closed the first part of the show with “Buppesannivas”, the soundtrack of Channel 3’s popular period drama of the same name and “Cham Khue Rao” featuring Tom Isara. “If we have someone with us, our lives are more valuable,” mused Pu Anchalee.

Tom Isara returned after the intermission with a medley of hits featuring “Nuang”, “Restart” and “Chan Tong Khoo Kap Ther” though sadly, he failed to generate as much interest as Kob Songsit who performed a medley of “Kheed Sen Tai” and “Term Mai Tem” before singing “Rak Rao Mai Kao Loei”. The ever-handsome Kong Saharat drew screams as he appeared on stage to sing “Rak Ther Sud Huajai”, “Luek Sud Jai” and a cover of Rewat Buddhinan’s “Chao Sao Thi Klua Fon”. Pod Tanachai returned with a slow song, “Rak Khun Khao Laew” before segueing into uptempo numbers “Korn” and a medley of “Busaba” and “Tim”. Ae Jirakorn entertained with “Klub Ma” and “Jak Nee Pai Jon Niran” matching his high pitch to Pu Anchalee’s powerful rock vocals then handing the stage over to her. Anchalee took the audience back to 1984, the year she released her debut album “Nueng Diew Khon Nee”, with a medley of “Yoo Pai Wan Wan”, “Mai Phid” and “Khid Pai Aeng” and had the audience waving their hands in time to the tunes. Fans screamed again, when Tor Saksit and Ice Saranyu came back with their popular songs. The concert wrapped with “Proh Arai”, a song penned especially for this concert by Neung Jakrawal.

“I am very proud to be a part of the concert,” said Neung Jakrawal, who along with his band provided the backing for the show.

“Every single artist came here tonight to keep the audience fully entertained. Our energy and enthusiasm had no limits. The whole show was impressive and memorable.”