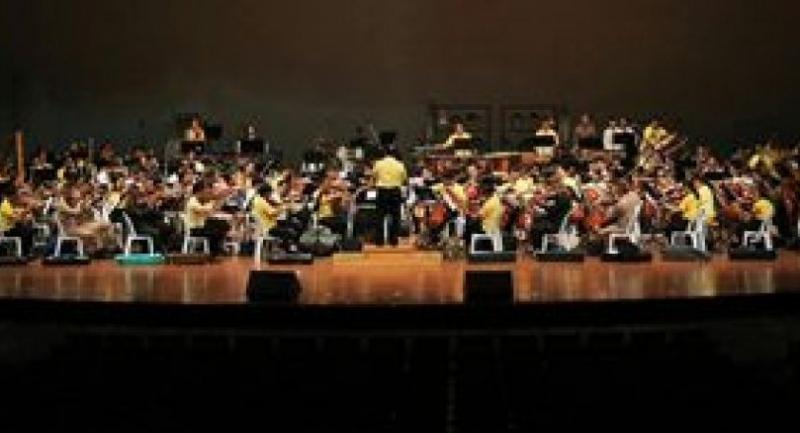 Musicians with the Ruamjaiphak Symphony Orchestra rehearse for the festival at the Thailand Cultural Centre.

Music, dance and exhibitions are all set to light up the nation from tomorrow as the week-long arts and culture extravaganza celebrating the coronation of His Majesty King Maha Vajiralongkorn gets underway in Bangkok and the 76 other provinces of the country. “This festival will be an assembly of national artists and performers from many different types of arts,” said Culture Minister Vira Rojpojchanarat, during the recent press conference at the small hall of the Thailand Cultural Centre. In Bangkok, the festival is being held at Sanam Luang, the royal field at the heart of old city, and will feature a main stage in the middle of the ceremonial ground and two minor stages on the side fronting on to the Supreme Court and Thammasat University.

The opening ceremony in Bangkok will kick off at 6.30pm on the main stage with blessing dances under the title “Asirawat Thuay Rat Nom Chom Rachan”. That will be followed by a khon drama involving more than 600 performers. The masked dance is based on a story of the Ramakien, Thailand’s national epic derived from the Hindu epic Ramayana and is being staged under the name “Phra Baramee Ming Fah Ramavatar”. “Ramavatar” picks up at the beginning of the story in heaven when the demon Nonthuk, who has been abused by the angels, is granted the powerful diamond index finger from Phra Isuan (Shiva). He uses the finger to kill masses of angels as he claims his revenge. Phra Isuan assigns Phra Narai to kill Nonthuk and so Nonthuk is reborn as the 10-faced and 20-handed giant Tosakant on Earth. Phra Narai is reborn as Phra Ram with a mission to take down all the demons including Totsakant. The conflict starts when Totsakant abducts Nang Sida (Sita), Phra Ram’s wife. Phra Ram then sets off on a journey to the Kingdom of Lanka, along the way meeting the monkey chief Hanuman who helps him rescue Sida. The “Ramavatar” ends at the point when Phra Ram arrives in Lanka before a series of wars begin. The khon performance features three sequels: “Sathonlamas Chalerm Raj Chakri” (“Royal Land Procession to Honour the Chakri Dynasty”) by the Sala Chalermkrung Foundation, “Leh Asuree Muang Longka” (“Trickery of Longka Giant”) by the Foundation of the Promotion of Supplementary Occupations and Related Techniques of Her Majesty Queen Sirikit, the Queen Mother, Thailand, and “Borom Rajaphisek Phra Ram” (“Coronation of Phra Ram”) by Office of Performing Arts, Fine Arts Department, and Bunditpatanasilpa Institute. In the latter tale, Pra Ram is the son of the king Thotsarot of Ayutthaya and the incarnation of Phra Narai. “It will be magnificent on the 80-metre stage,” says Ministry of Culture Permanent Secretary Kritsayapong Siri. “For the grand opening, we are providing a special area at the front of the stage for the disabled and the elderly along with parking at the Government Lottery Office. For the remainder of the festival, the parking lot will be at the north end of Sanam Luang.” The festival’s programming includes a concert by the Ruamjaiphak Symphony Orchestra, which will perform “Tosama Rachan Khwanla” on Thursday, a luk thung (Thai countryfolk) performance on Friday, the “Symphony of Rattanakosin” on Saturday, the musical “Phasan Jai Phak Thawai Ong Rachan” on Sunday performed by Sinjai Plengpanich, Thanavat “Pope” Wattanaputi and Ranee “Bella” Campen, an international dance festival on May 27 performed by troupes from Cambodia, China, India, Indonesia, Malaysia, Myanmar, the Philippines, the Republic of Korea, Singapore, and Vietnam and, to wrap things up, a procession from the four regions of the country offering floral offerings in honour of HM the King and drum performances on May 28. Upcountry the shows will focus on folk arts, culture and traditions, portraying the identity of each of the provinces, says Pornpoj Penpas, deputy permanent secretary of the Culture Ministry. Chiang Mai’s events run from Wednesday to May 28 between 5 and 11pm at Lanna Folklife Museum and Three Kings Monument. The main shows for the Central region are being held in the multipurpose yard of Prachuab Khiri Khan City Hall from Wednesday to Friday between 5.30 and until 9.30pm while the Northeast bash is at Thung Si Mueang in Ubon Ratchathani from Wednesday until May 28 from 6.30 to 9.30pm. Folks down south should head to the Tinnasulanon Stadium in Songkhla from Wednesday to May 26 between 7pm to 11pm, and the lawn of Phuket City Hall until May 28 from 5.30 to 9pm. Another major highlight is the light, sound and water screen show, entitled “The Glorious Grace of His Majesty” and which celebrates the Royal Coronation of King Rama X, which will see more than 10,000 lights in form of spectacular flowers and trees spread over Sanam Luang. The lights will be switched on from 7pm onwards with the show itself running from 9.30 to 11pm.

“It is the first time we have having a water screen show in Thailand,” says Sermkhun Kunawong, the founder and chief executive of CMO event organising company. “It has been growing in popularity around the world and recently featured at the Tokyo Midtown. “It will make for beautiful scenery in front of Grand Palace. The light flowers will morph into several colours, while the water screen will be 15 metres high. We will also create two light tunnels, each four to five metres long for people to take pictures and selfies.

“The coronation is an important event in our history and it should remain in our minds.”

Shoot for the stars

- Find out more by calling the Culture Hotline 1765 or visit www.MCulture.go.th.