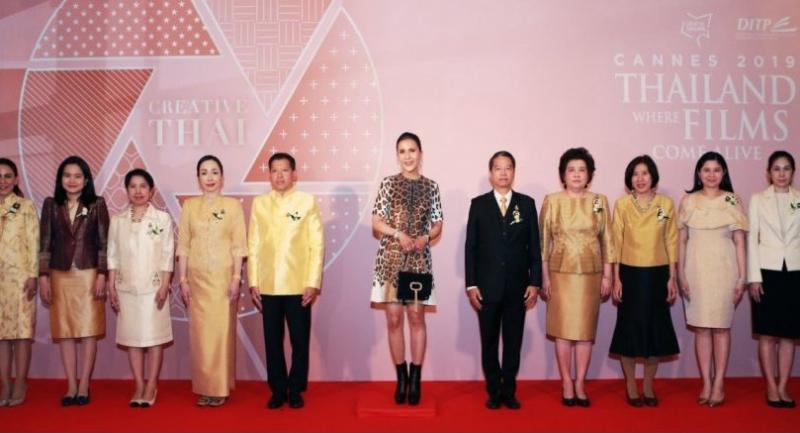 The Department of International Trade Promotion (DITP) hosted a highly successful Thai Night at the Cannes Film Festival last Saturday, at the InterContinental Carlton Cannes with Princess Ubolratana the guest of honour.

Boonyarit Kalayanamit -Permanent Secretary of the Ministry of Commerce hailed the success of Thailand’s film industry in the international market.

“At the recent Hong Kong Film Mart, Thai companies generated sales, licensing deals and contracts totalling more than US$50 million (Bt1.6 billion). We are extremely confident that here in Cannes, we will exceed that figure, and once again support the film industry of Thailand in expanding its market, finding new business opportunities and attracting new audiences across the globe.”

Kalayanamit also welcomed the success of Thai films in the international market. “Friend Zone” from GDH 559 and “The Lake” from Hollywood (Thailand) have both secured international distribution. Twelve Thai companies were given the opportunity to present their latest projects and services.

At the Marche du Film in Cannes 2019, the Department of International Trade Promotion, Ministry of Commerce presented 12 Thai companies: 9 film production and distribution companies and 3 production service and facility providers at a dedicated Thailand Pavilion at the Palais Level -1, Booth 22.01. The 12 companies used the opportunity to present their latest film productions and services, and in the first four days of the market, engaged in over 319 meetings, with an estimated total of US$257 million in generated revenue. Thai Night is one element of the ongoing programme of promotion for the digital content industry in the international market, which is undertaken by the Department of International Trade Promotion, Ministry of Commerce. Other sectors of the digital content industry which also receive support include animation, character licensing, software, and games, which demonstrates a total commitment by the Thai government to support the digital content industry.

Find out more at [email protected]