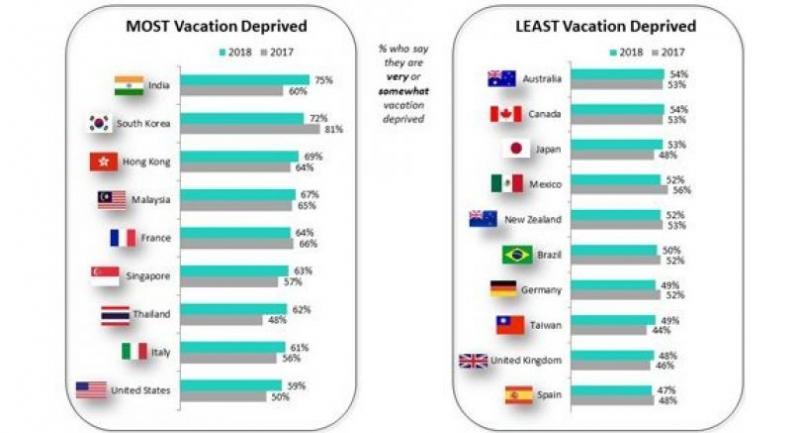 Thai workers are the seventh most vacation deprived globally yet 74 per cent claim they would cancel a vacation due to work, according to the 18th annual Vacation Deprivation Study by Expedia.co.th.

The study examines vacation usage and trends across 19 countries. The report also found that global vacation deprivation is on the rise, and that workers in Thailand took the fewest number of vacation days in the world in 2018, alongside Japan and the US.

Incorporating insights from 300 fulltime working adults in Thailand, the study revealed that 80 per cent of Thais agree that they deserve more vacation days than they are given, ranking them fourth highest in Asia to express that, after Japan (54 per cent), Hong Kong (86 per cent) and India (82 per cent).

Consistent with 2017, most Asian have the hardest time leaving work behind when taking vacations. Asians also have the highest incidence of cancelling or postponing vacation plans due to work. The top three reasons for Thai workers not taking a holiday are: Don’t know where to go (27 per cent), saving up time for a long holiday (25 per cent) and can’t get time off work (24 per cent).

“Over the years we are starting to see more and more workers take short vacations, and this could be due to public holidays falling over a weekend, allowing for long weekend holidays. Thailand is a great example of that. While bigger trips are great, a quick break can drastically improve quality of life,” said Lavinia Rajaram, APAC Head of Communications for Brand Expedia.

Twenty four percent of Thais go six months or longer without a vacation, with more than a quarter (42 per cent) going three to six months a year without time off. Considering time off is so precious, one might be surprised to hear that almost a quarter (24 percent) of Thai workers admit to checking work email/voicemail at least once a day while on vacation.

While this behaviour has stayed mostly consistent over the past decade, perhaps there’s hope for future generations – younger workers are the least likely to check in frequently, at 19 per cent for 18-34 year olds, compared to 31 per cent of the 50 and over crowd.

Interestingly, the pressure to be available may be selfimposed – only a small number of respondents say their managers (17 per cent), junior staff (10 per cent) and clients (12 per cent) expect them to checkin daily while on vacation, proving most people need to simply give themselves permission to unplug.

The growing focus and conversation around mental health may be changing how Thai workers vacation, with 35 per cent of Thai respondents saying they regularly take vacations where their primary goal is “mental wellness”, and they overwhelmingly feel that vacation is a chance to “hit the reset button” on stress and anxiety. Thai workers also report taking an average of two mental health days each year, which most feel should be considered vacation days (82 per cent), rather than sick days (18 per cent).

“A wellnesscentric trip doesn’t have to mean a spa or yoga retreat, although those are popular options among Thais,” says Rajaram. “For most of us, recharging simply means we need to disconnect and slow down. Whether it’s a family vacation or a solo escape, set rules about how often you’re allowed to check email and try not to overschedule your days.”