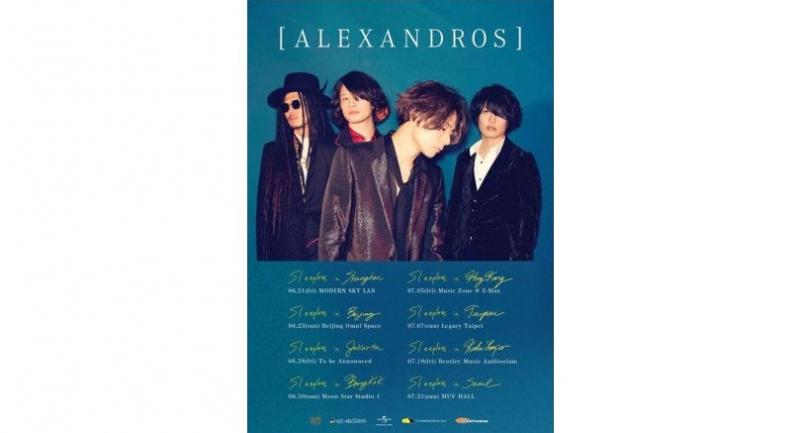 Japanese rockers Alexandros make their Thai debut on June 30 in the concert “Sleepless in Bangkok” at Moon Star Studio 1.

The J-rock band featuring Yoohei Kawakami on vocals, Hiroyuki Isobe on bass, Masaki Shirai on guitar and Satoyasu Shomura on drums, recently released their latest album, “Sleepless in Brooklyn”. Their singles “Arpeggio” and “Pray” can be heard on the soundtrack of Japanese movie “Godzilla: King of the Monsters.” All new with Nu’est

Korean boy band Nu’est is coming back to Thailand in July and this time will feature its complete lineup - JR, Aron, Baekho, Minhyun and Ren. The concerts titled “Segno” will be staged at Thunder Dome, Muang Thong Thani, on July 20 and 21 at 6pm. SuJu – the beat goes on

This summer will be hotter than ever because SM True is bringing back Super Junior’s members Donghae and Eunhyuk for their second concert in Thailand. Dubbed “The D&E in Bangkok”, it takes place at Thunder Dome, Muang Thong Thani, tomorrow night at 5pm.

D&E – one of the units from the Alist famous Korean boy band – have already released two mini albums “The Beat Goes On” and “‘Bout You”.

Tickets are from Bt2,500 to Bt6,000 at all branches of counter service and AllTicket.com. Grand Ex’, one of Thailand’s top string combos from the 1970s, celebrate 50 years in showbiz with what they say will definitely their last concert, “Grand Ex’ Boriboon”. It takes place at Impact Arena, Muang Thong Thani, on August 3. After a hiatus from the music industry for a number of years, Irish chart-toppers Westlife have announced their return to the stage with their latest “Westlife the Twenty Tour” coming to Impact Arena, Muang Thong Thani, on July 24.

One of the most popular boy bands of the 1990s and 2000s, Westlife featuring Nicky Byrne, Kian Egan, Mark Feehily and Shane Filan  recently reunited after a sixyear break.