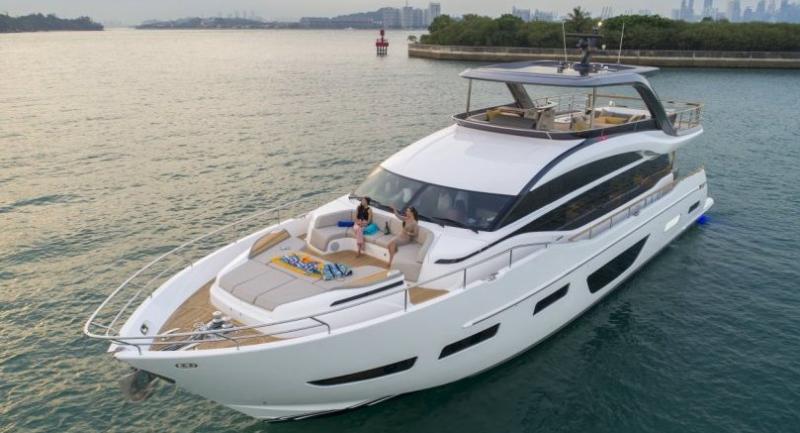 A general view of Princess Y85

THE YACHTING lifestyle has become increasingly popular in the region, with more people wanting to fulfil their dreams of tranquil and private cruises among idyllic islands with friends and family.

Vrit Yongsakul, managing director of Boat Lagoon Yachting, has led the growth of Thailand’s biggest yacht importer-distributor for 13 years, and he’s seeing interest in the lifestyle surge, especially in Thailand.

It’s largely driven by the appeal of absolute privacy, he says. “Luxury yachts can take their owners anywhere they wish to go and at any time. And the owners have many destinations to choose from, so it never gets boring.”

Modern yachts are also designed with such a high level of comfort that they’re akin to luxury condominiums, says Vrit, who introduced a range of new British yachts in Singapore last week.

“It’s like taking your own condominium with you, complete with a comfortable living room and kitchen and elegant bedrooms.”

Yachting is a sociable pastime. Friends and family might take several yachts out together, cruising to islands much as the owners of luxury sports cars and motorcycles organise group outings on weekends. It all serves to cement long-lasting friendships, Vrit says.

Yacht owners obviously don’t have to worry about money. They had previously been concerned about how often the yacht was used and how best to maintain it, and whether friends were available to join them on a cruise, says Vrit.

His customers these days are more sophisticated and have more knowledge about yachting, and they can differentiate among various models, he says.

They might even consider the financial status of the manufacturer when deciding to buy a boat because they might want to upgrade later. Customers make the decision to buy faster than in the past because they have more confidence in after-sales service, says Vrit.

Distributors typically place an order with the boat builder once a customer decides to buy. There can be a wait or one year to one and a half years for delivery.

Prospective customers can make their choice among models by taking a “test run” on one of the yachts Vrit has in stock, and he’ll also accommodate them if they want to buy right away.

“Many of our customers are financially ready to buy and they don’t want to wait – they want to get it right away,” he says.

Vrit’s long experience has taught him what his customers like and expect, and the boats he’s imported meet their demands, so they sell quickly.

His company’s sales have grown 10-15 per cent annually over the past 10 years. It sells about 40 yachts a year at prices ranging from Bt40 million-Bt900 million.

Vrit says his company has a great record of customers remaining loyal. First-time buyers often come back quickly to either upgrade their yachts or buy additional boats. What Vrit was showing in Singapore last week was three new models of the Princess Yacht, the world’s most popular choice and built by a well-known British boatyard.

The range, including entry-level super yachts and sport yachts, were being shown for the first time in Asia at One 15 Marina Sentosa Cove. Visitors got to admire a Princess Y85, Princess F45 and Princess R35, together worth Bt450 million.

One was sold beforehand and two people expressed interest in the Princess Y85, alone worth Bt300 million.

The Princess Y85 is regarded as the pinnacle of the Motor Yacht class, offering elegant luxury living, lots of space, and great performance.

The Princess R35 is described as a sports yacht of revolutionary performance, optimised for speed with a groundbreaking “sports car” air-intake system and hydrodynamics, exhilarating rides guaranteed. These three models are among 15 yachts worth Bt1 billion in total that Vrit is importing from the British manufacturer this year.