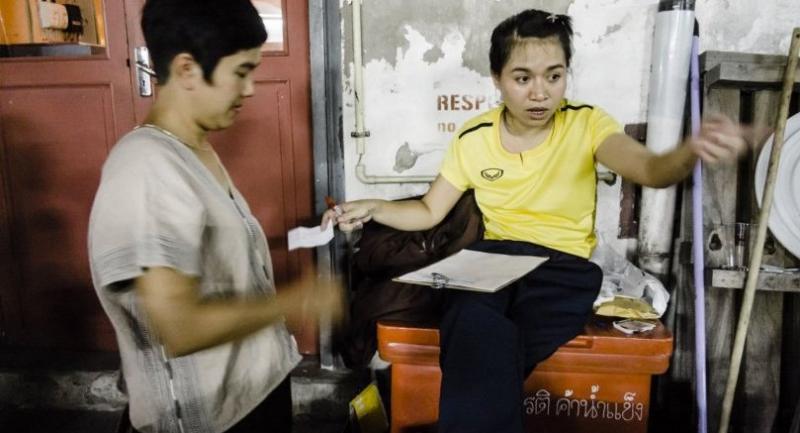 Incarcerated on charges of lese majeste, young activist and artist Prontip “Kolf” Mankong became part of the community and is now a vocal champion of prison reform For Prontip, she doesn’t think former inmates are not victims, but the great fighters. She and her fellow inmates clad dress in vivid super heroines seen in the video art created by Pisitakun Kuntalang. Photo courtesy of WTF Gallery.

After spending two years behind bars for violating the country’s draconian lese majeste laws, the life of young performing artist and rights activist Prontip “Kolf” Mankong changed dramatically. But rather than grinding the 30-year-old artist down, it made her stronger, a fact she clearly demonstrates by transforming that profoundly disruptive experience into creative art.

Her powerful debut exhibition “Planet Krypton” at WTF Gallery in Bangkok and her recently published book “All They Could Do to Us: Courage in Dark Times from a Fighter (Not a Victim)” recounts her experiences as an inmate and the close relations she developed with other prisoners, whom she refers to as family.

Prontip was arrested in 2014 for playing a part in the satirical play “The Wolf Bride”, which marked the 40th anniversary of the October 1973 military crackdown on pro-democracy student protester at Thammasat University. Set in a fictional kingdom, it featured a king and his adviser. Prontip, who directed the play and her fellow actor Patiwat Saraiyaem were both convicted on lese majeste charges and received five years behind bars, which was later halved as they both confessed to the “crime”. Prontip, who was sent to Bangkok’s Central Women’s Correctional Institution, says her time there proved quite an education.

“Life behind bars was tough. I cried everyday,” Prontip tells The Nation. “But we [prisoners] are resilient and set out to survive in the prison we temporarily called ‘home’.”

Instead of accepting her fate, Prontip began studying Thailand’s justice system and embarked on new life experiences. She learned many things – dancing, playing music, singing, Arabic, cooking without utensils and making lipstick. She also taught English to her fellow inmates. At the same time, she also discovered love, caring and empathy with the suffering of others.

Although writing while incarcerated is taboo, Prontip found a way to record her daily experiences, the suffering of other inmates and the lack of standards in the Thai justice system. These touching stories are related in the 800-plus-page-book, which was launched in March. Porntip says she’s grateful to Ida Arunwong, editor of the Read Journal, who encouraged her to document these untold truths.

“Writing is my weapon,” she recalls. “It’s therapeutic too.”

Since being released from prison in August 2016, Prontip has been a vocal campaigner for prison reform in Thailand. Her own experience taught her that returning to normal life was no easy task and she immediately started a support group to assist former inmates after their release. “Freedom put me in a dilemma,” she recalls. “I wanted to go back – my soul was still locked behind those bars. The psychiatrist I consulted suggested I search for my family members – my fellow inmates.”

The psychiatrist’s advice worked and Prontip invited four of those fellow inmates to join her for “Planet Krypton”. She collaborated with multi-disciplinary artist Pisitakun Kuntalang to portray their lives through the interactive multimedia installation, which comes in two distinct hues – vivid colours symbolising the positive energy of the inmates’ empowerment and black and white reflecting the harsh reality both inside and outside prison. The video installation tells their stories. Prontip doesn’t see her former fellow inmates as victims but as great fighters. They all dress up as superheroes for Pisitakum’s video art.

“First, there’s always a central power,” Porntip says in the back-and-while video. “Find that central power as quickly as possible and become a part of it. When you enter that, there’s a mechanism to learn.”

The gallery itself has been converted into a mini prison where viewers can share their suffering.

Just like in theatre, Prontip acts as the prison’s chief warden for the workshop organised for viewers curious to experience how hard it is to sleep in a tiny cell in one of the world’s most crowded and dismal prisons. A workshop for audiences who curious to experience how hard to sleep in the tiny prison. Photo/The Nation

Many inmates sleep on hard linoleum floors in cells so cramped they have to rest on their sides or lay their limbs on top of one another.

Fluorescent lights are kept on throughout the night and dozens of prisoners have to share a single toilet in the back of the cell, with not even a curtain for privacy.

Her fellow inmates demonstrate how to make milk candies and spicy canned fish salad, while one reveals how they used to sneak food colouring from the kitchen and mix it with Vaseline to create homemade lip gloss. She sold the gloss on the prison’s black market to earn money to raise her daughter.

Participants in the workshop express their thoughts on the board under a banner reading “return good people to the society”, which refers to the motto of the Thai prison system.

“You can see from the way they sleep just how Thailand’s prisons lack any human rights standards,” one participant comments.

“Prontip’s story of being incarcerated for violating the lese majeste law might be seen as just another casualty of Thailand’s political wars,” says gallery director Somrak Sila, who co-curated the show with Penwadee Nophaket Manont.

“But if we look deeper, it is symbolic of the changes in our society. The country is rapidly falling into a deep social trough, where each person fights only for themselves, where connections between people are weakened by the blinkers that a repressive government puts on them. The result is a kind of tunnel vision. Hence the extreme divisions, the tribal and political turf wars that are tearing the country apart.”

Prontip went the other way. Instead of allowing herself to be broken and lashing out with anger and resentment, she chose to let change happen, and to become part of a community. She asked herself what her responsibility in the prison was, and by focusing on her new mission – to encourage the women to help each other survive this darkest period – she earned their trust and won the freedom to make a lasting difference.

Although the five-week-show wraps up this weekend, the lives of the Krypton gang are destined to move both art scene insiders and the general public through a variety of genres.

The curators and artists are planning to echo these powerful human-rights issues by hosting shows upcountry and abroad. Prontip herself is seeking to collaborate with a theatre director to portray her story through a stage play. We might even get to see her life and those of her fellow inmates on the big screen, as leading director Wisit Sasanatieng is said to be interested in the efforts of these heroines. Meanwhile her book will soon be translated and published in English. Tyrell Haberkorn, an associate professor in the Department of Asian Languages and Cultures at the University of Wisconsin-Madison and author of “Revolution Interrupted: Farmers, Students, Law, and Violence in Northern Thailand”, will take on the translating work.

“I hope my life will be recounted other platforms if financial support can be found,” she says.

In her parallel universe between art and life, Prontip is drawing on her ingenuity to support her fellow inmates and help them survive in this very unequal society.

- Artist Prontip Mankong and her fellow inmates will give a talk on Sunday at 5pm as they wrap the exhibition “Planet Krypton” at WTF Gallery in Bangkok.

- “All They Could Do to Us: Courage in Dark Times from a Fighter (Not a Victim)” in Thai is published by the Read Journal and available at leading book stores. For more information, go to Facebook/readjournal.

Tags:
Prontip “Kolf” Mankong lese majeste law Thailand “All They Could Do to Us: Courage in Dark Times from a Fighter (Not a Victim)” FREEDOM behind BARS