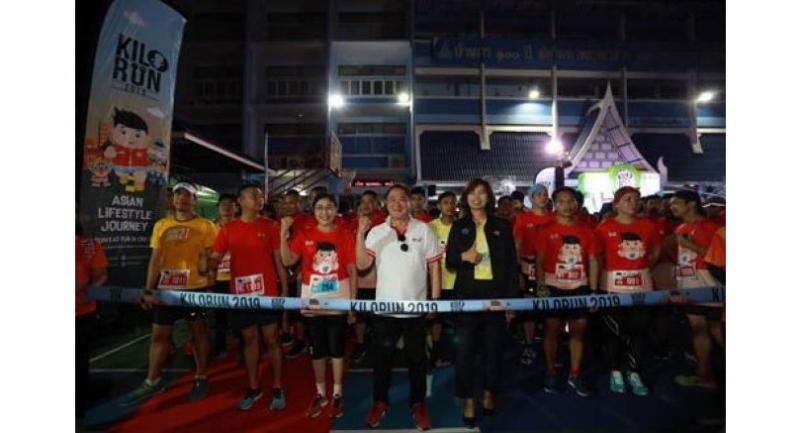 Based on the concept “Asian Lifestyle Journey”, the event saw more than 1,100 runners, among them celebrities Chompoonuch “Jeab” Piyatamchai and Pongsiree “Pookhai” Bunluewong, arriving in the early morning at Mahaprutharam Girls’ School before making a start on the KM part at 5am. This was divided into the L Run over a 10-kilometre distance and a 6-kilometre M Run, which kicked off 20 minutes later. Some walked or jogged while others ran and the winners of the 10km leg were eventually named as Assoc Prof Paitoon Rashatasakhon, who works at the Department of Chemistry, Chulalongkorn University, and Narumol Sirirungruangkul. Danaithep Limsakul and Pornyamol SaeLim topped the times in the 6km race. Each received a prize of two AirAsia tickets. The afternoon was devoted to the KG part of the event and draw some 400 participants, including Dome Pakorn Lam. We were divided into small groups at the starting point of the girls’ school and moved towards Yaowarat Road, where some restaurants proved unable to cope with the large numbers. Two signature dishes awaited us near the starting point – rice with roast duck and fried rice vermicelli with water mimosa and crispy chicken. After a reasonably short jog, we queued up for dim sum served with Luo Han Guo (monk fruit) juice, followed by salted egg lava bun with iced milk tea and ice cream made of soy sauce from Dek Somboon. We also stopped and queued at Khrua Lamai for crispy chicken noodles. Re-energised by Lod Chong, we then enjoyed egg noodle and shrimp wonton with roast pork. The run-and-eat event ended with custard toast bread and “kuichai” (steamed chives dumplings). While many of the participants complained of abdominal discomfort, the winners were finally declared with Suwat Tanwattana and Surapong Hatkaru, who consumed 2.6 kilograms each, topping the male category and Rapeepan Turapipak, who downed 2.8 kilograms, picking up the ladies prize.

The next events will be held in Osaka, Japan, on October 22, and in Chiang Rai on November 24. Early bird tickets are now available at www.Kilorun.com. For more information and reservations, visit Kilorun 2019’s Facebook, Line, Twitter and IG feeds.