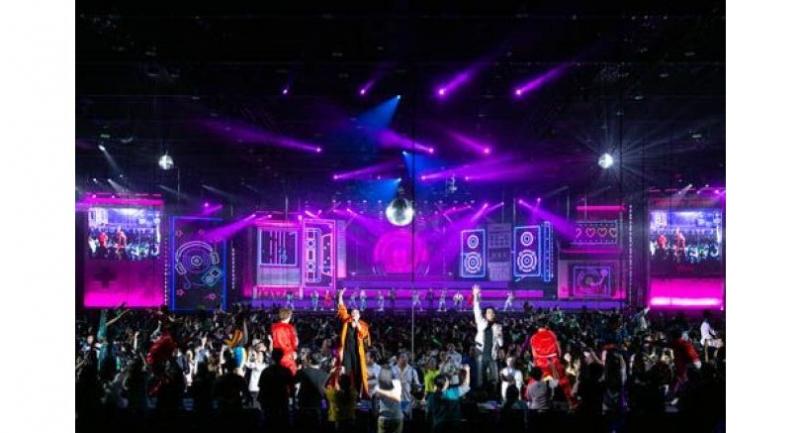 The singers return to stage for the finale aptly dubbed "Love."

Tata Young, Mos and the China Dolls were among the stars whipping up fond memories at last weekend’s cassette revival

The 1990s came back to life in style last weekend as 25 popular singers from that golden era joined up on stage for a show that had fans travelling back in time and reliving their happiest moments.

The nostalgic “Cassette Festival” concert featured some 70 songs from almost three decades ago, when the popular media of choice for storing music was, as the title suggests, the cassette tape. Three rounds of the soldout concert, organised by A-time Showbiz, were held on Friday, Saturday and Sunday at the 5,000-seat Royal Paragon Hall.

The show on Saturday night began with an air of excitement as Tata Young, China Dolls, Katreeya English and Nicole Theriault took turns to sing their popular numbers. They were joined by over a dozen dancers on a U-shaped narrow platform that covered the two central aisles. Despite the hall being packed, audience members simply couldn’t sit still, getting up on their feet and dancing to the lively tunes pretty well from start to finish.

The background screen onstage and the walls on both sides of the auditorium added to the nostalgic vibe, with oversized dummies of objects from the ‘90s, including 8-bit game consoles, Pacman, Nokia phones, Gameboy, Walkman, an early boxy Macintosh – and, of course, tape cassettes – forming the decor. In addition to Tata and Nicole, the concert also featured Mos Patiparn, Aom Sunisa, Beau Sunita, and UHT – all of whom achieved sales of more than one million cassettes for their most popular albums. They were joined by Katreeya, Noom Kala, Tui Teerapat, Panatda Ruangwut, Andrea Suarez, Ohn Sripan, duos Fundee & Funden, China Dolls and Mr Team, as well as trios Zaza and Project H. During the four hours of the concert, songs were performed almost non-stop, with some of the singers occasionally stopping to utter a few amusing sentences. Possibly because of the large number of songs featured, many of the mini sets featured three to five songs in a row by a single singer or group. For many of the participating artists, it was their first full concert in almost 20 years. The Project H girls told fans they hadn’t performed on stage for more than a decade. Ohn, who is now an actress and TV host, confided this was the first real concert in her singing career. Andrea, now a lawyer in the United States, had her last Bangkok concert in 2007.

Project H performed a set of four songs while Zaza, another popular girl group from the late 1990s, did three songs in a row, including their hit “Luak Dai Mai”. Noom Kala, the sole rocker among the gaggle of popsters, sang five of his hit songs one after the other, including “Bok Sak Kham”, “Chai Chan Rue Plao” and “Kho Pen Tua Luak”. His captivating performance was rewarded with a “sea of stars” made by thousands of phone flashlights.

Leading heartthrobs of the ‘90s, Mos, Tata and Aom still managed to wow their fans, both separately with their hits and together on the ballad “Piang Puan”.

Aom performed “Ya Yom Pae”, her first song released 29 years ago, taking the opportunity to come down from the stage to greet her eager fans.

Andrea shed her lawyerly persona to perform four songs including “Sop Ta”, “Baan Ther Si” and “Wat Rob Ew”, finishing with the splits and showing that she remains very fit at 40. Tui Teerapat, who is also an actor, was greeted with loud cheers as he performed three songs, aided and abetted by his fans.

Indeed, many of the stars were impressed by their enthusiastic fans who sang and danced along. Panatda said she was “really glad” for their support and Beau added that she had been “refuelled” by their cheers. For her part, Andrea said the “power” she got from the supportive fans was far more than she had expected.

The latter part of the concert featured a back-to-back set of dance numbers, including “Muay Nee Ka” by China Dolls, “OK Na Ka” by Katreeya, “Rer” by Zaza, “Hello” by Mos, and “Sakkanid” by Tata.

The show wrapped with a finale featuring the song “Love”, with all the singers parading along the Ushaped beams and getting up close and cosy with their fans before waving a final goodbye.