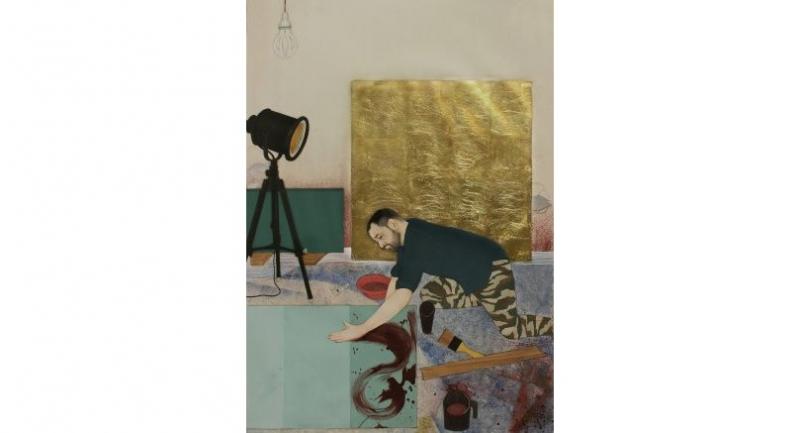 His award-winning gouache and gold leaf on wasli pays homage to Qureshi’s contribution to the neo-art miniature movement by documenting him in his studio. This work also particularises the discourse of a workshop - the concept of Mughal atelier where apprentices worked under masters contrasted with an independent artist’s studio, in which he is free to pursue through his own artistic agenda. In the work, Javed plays with size and perspective to denote status and importance, much like traditional Mughal miniatures.

The winner was awarded a trophy and US$30,000 (Bt945,000) at the Sovereign Art Foundation’s annual gala dinner and auction in Hong Kong. The public’s favourite artwork was recognised when Munawar Ali Syed, also of Pakistan, clinched the popular vote and an award of US$1,000 with his artwork “My 3rd Story in English”. Chinese artist Fu Xiaotong, the highest scoring female artist in the competition, was awarded the newly launched Vogue Hong Kong Women’s Art Prize and US$5,000 for her work “163,680 Pinpricks”.

To reach the final shortlist of 30 artworks, over 70 independent art professionals from across Asia Pacific nominated 400 mid-career artists, hailing from 28 countries, for the prize. A total of 19 countries were represented amongst the 30 finalists, making it the geographically diverse shortlist in the history of the prize. The entries were shortlisted by an international panel of art specialists, including writer, curator and museum director David Elliott; Jan Dalley of the Financial Times; Mami Kataoka of Mori Art Museum, Tokyo; Hong Kong architect, artist and educator William Lim; and internationally renowned artist Zhang Huan.

“Working on a large scale that quotes the neo-miniature style taught at his alma mater, the National College of Arts in Lahore, Javed comments on and transforms this traditional way of working. By concentrating on a moment of creation in Imran Qureshi’s studio where he was an assistant, not only does he stress the importance of his former teacher’s work but also reveals its powerful context. Qureshi is shown making the gestural, blood-red hand paintings that shattered the atmosphere, scale and hierarchical methods of the traditional Mughal miniature to depict horror and terror in the present. In this work, Javed records, frames, amplifies and pays homage to this moment,” commented chair judge David Elliott.

For the winner of the public vote prize, Munawar Ali Syed, his pen-and-ink drawing, one of a series, appropriates a minimal approach, using an agglomeration of straight black lines over a coloured horizontal grid, to express his psychological state.

Fu Xiaotong works both minimally and conceptually. Here, by applying pressure from behind, she has moulded a form of relief, with different depths, intensities and shapes, that rises out of the surface of a large sheet of hand-made rice paper.