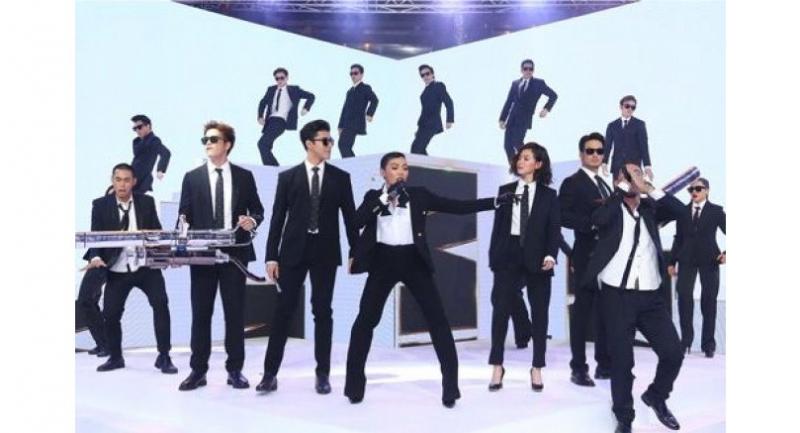 Sony Pictures Thailand hosted a gala premiere of the epic sci-fi comedy "Men in Black: International” last week, bringing along four Thai celebrities and transforming Infinicity Hall on the fifth floor of Siam Paragon into the headquarters of a top secret government organisation.

The curtains opened to reveal Pakorn “Boy” Chatborirak, Teeradetch “Alek” Metawarayut, Naphat “Nine” Siangsomboon, and Pimchanok “Baifern” Luevisadpaibul, representing four MIB agents in black suits, and acting out a fight scene to protect the Earth from the scum of the universe. “I think that Chris Hemsworth is greatly suited to this sequel of ‘MIB’,” said Boy Pakorn when asked about the movie by Premmanat “Peck” Suwannanon. “Some filmgoers might be under the impression that Chris Hemsworth and Tessa Thompson have replaced Will Smith and Tommy Lee Jones but that’s not the case. They are a new team of MIB at another country, England,” said Alek Teeradetch.

“I like both Chris and Tessa, who have been a couple since ‘Super Hero’,” said Nine Naphat.

The four celebs were attired in black suits from Paul Smith’s special collection, “A Suit to Travel In” which uses a high-twist worsted wool yarn to create a quick recovery, crease-resistant cloth, producing a versatile and highly practical piece of tailoring.

The Men in Black have expanded to cover the globe, but so have the villains of the universe. To keep us safe, decorated Agent H (Chris) and determined rookie M (Tessa) join forces – an unlikely pairing that just might work. When aliens that can take the form of any human arrive on Earth, H and M embark on a globetrotting adventure to save the agency – and ultimately the world – from their mischievous plans.