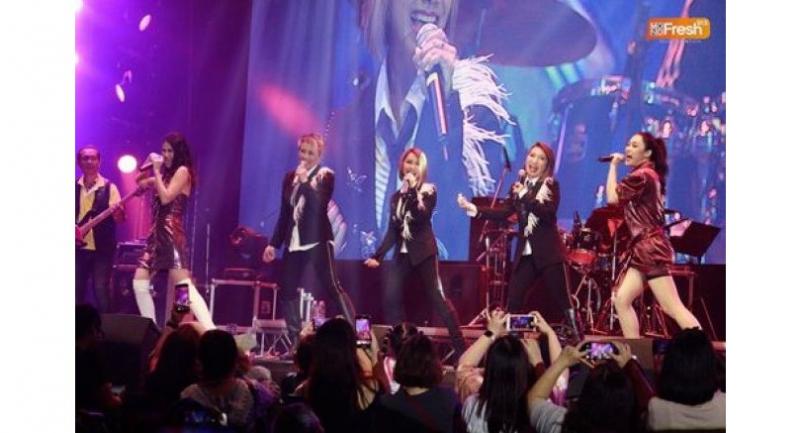 The five ladies jam on the final song.

Excitement was high in the GSB Stadium 29 in Nonthaburi province north of Bangkok last weekend as girl groups Sao Sao Sao and Triumphs Kingdom and their fans reunited for the soldout “Present Moment in Time” concert.

Sao Sao Sao, who shot to fame in the 1980s, were in fine form, joking about their advancing years with an audience of a similar age and raising lots of laughs. The trio, which features 54-year-olds Saowaluk “Amp” Leelaboot and Orawan “Pum” Yenpoonsuk and 51-year-old Patcharida “Maem” Wattana, both sounded and looked considerably younger thanks to wellfitting outfits and flattering makeup.

The ladies performed six songs –their own hits and some covers – in their first set, which was followed by a four-number sequence from ’90s favourites Triumphs Kingdom. The concert organisers thoughtfully posted the lyrics up on the big screen enabling the audience to sing along throughout. Sao Sao Sao shot to fame in 1983 with many hits including “Pratoo Jai” and went on to release 10 albums over the next seven years followed by nine special records. They are regarded to this day the first girl band in Thailand’s music industry, and one of the most successful.

Next up on stage was Triumphs Kingdom featuring Surattanavee “Beau” Suviporn and Kornpassorn “Joyce” Ratanameathanont, both 38. They made an equally solid impression on fans, drawing loud cheers and long applause for such megahits as “Handkerchief” and “Love Love Love”. The duo, a favourite with teenagers at the end of the ’90s, earned a reputation not just for their bubble gum pop but also for their signature camisole tops, which were considered highly provocative at the time. TK released four albums between 1999 and 2001, and a few singles. Beau attempted a solo comeback in 2006 but had little success. Last week’s gig wasn’t an entirely female show, with the ladies bringing along actor/singer Prama “Panjan” Imanotai to sing a few covers and join a medley with Sao Sao Sao. The second guest was none other than upandcoming star Sirichada “Millie” Ruamrudeekul, who accompanied Pannee on “Until Now” and brought the first half of the concert to a close.

Millie recently turned down an offer to join icon group BNK48, choosing instead to go solo with the Mono Music Gelato label, a subsidiary of the Mono 29 TV Channel, which co-hosted the concert with Government Savings Bank. The university sophomore is known for her singing and instrumental talents and is equally at ease on the piano, drums, guitar and ukulele. She performed her single “Me” before handing over to Sao Sao Sao to launch the second part of the show.

Triumphs Kingdom were next up and brought the crowd to its feet with “Don’t Get Me Wrong” and “Macho”.

Sao Sao Sao then returned to stage for an eight-song sequence that included Blondie’s “One Way Or Another” before joining up with Triumphs Kingdon for a closing medley featuring “Rak Khue Fan Pai”.