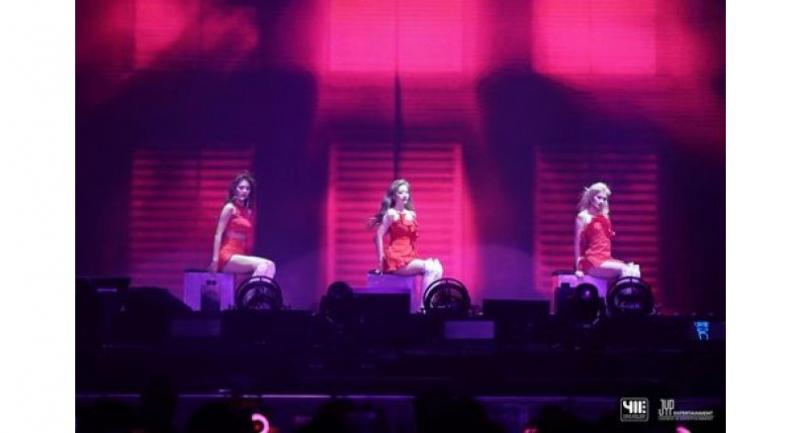 Sana, Dahyun and Tzuyu look hot in red as they perform a sexy dance in Beyonce's "Dance for You."

Now on their first world tour, Twice, the much-loved girl group from South Korea, made a stop in Thailand last Saturday night and blew away their fans – known as Onces – with a truly amazing concert.

Thousands of Onces filed into Impact Arena, Muang Thong Thani to find the girls were truly honouring their promise to return soon not just with a full-scale concert but also with a better show. Held at a bigger venue, their third concert in Thailand dubbed “TwiceLights” featured greater vibes, more stunning effects, and a smoother flow thanks largely to the collaboration between Thailand’s Four One One Entertainment (411ent) and South Korea’s JYP Entertainment. The concert started at 6pm sharp with a video clip showing a prism breaking into colourful beams. Black was the first colour to take over the stage, as all nine singers appeared in black attire for their opening song. Breaking away from their usual image of being “lovely”, Nayeon, Jeongyeon, Jihyo, Dahyun, Chaeyoung, Sana, Mina, Momo and Tzuyu (the first five are South Koreans, the next three Japanese while the last hails from Taiwan) looked cool as they served up “Stuck in My Head” from their latest album “Fancy” to their fans.

The mood continued with all-time favourites “Cheer Up” and “Touchdown”.

The nine goddesses then officially greeted their fans. Though speaking mainly via an interpreter, the girls also came up with a few Thai words, shouting out “Sawasdee kha. We are Twice”. Each of the nine singers then greeted her supporters, with Chaeyoung concluding that Onces should check out the various colours that she and her bandmates would be bringing to the show.

Sana then asked for applause and cheers before the girls swung into “BDZ” and “Yes or Yes” fol¬lowed by “I want you back” and super hit “Dance the night away”. Jeongyeon can't hold back the tears as she sings "You in My Heart."

Another video clip then lit up the giant screens, revealing that it was time for ‘White’. And so, when the girls returned to the stage, they were all dressed up like princesses in snowy gowns. This time, the nine formed a big circle on the centre stage and crooned “After Moon”. It was a clever bit of staging as no matter where fans were sitting in the hall, they had at least one of the supergroup facing them.

Jeonhyeon told the crowd that the next song – “You in my heart” was dedicated to all Onces, a comment that drew loud cheers.

Fans’ hearts grew even fonder when during the next song “Sunset”, their favourite singers walked around the hall getting up close and cosy with the thousands of Onces.

And then it was time for yet another clip that hinted Red would soon reign. And sure enough, Twice quickly reappeared in red costumes, performing “Heart Shaker”, “Strawberry” and “Woohoo”.

Bigger thrills followed, as  Dahyun, Sana and Tzuyu still wearing their short red dresses performed a sexy dance during their rendition of Beyonce’s “Dance for You”.

Blue-clad Momo and Jihyo competed for the cheers as they made powerful dance moves in their cover of Taemin’s “Goodbye”.

Nayeon, Jeongyeon, Mina and  Chaeyoung then paraded out in white, performing Lady Gaga’s “Born This Way” to loud applause.

Back on stage after another quick break, this time in colourful attire, the girls sang “Likey” before inviting fans to sing along to “What is Love” with the lines appearing karaoke-style on the screen to make things easier and fun.

Twice then gathered at the centre of the stage and split into the same three groups as earlier in the show. In this segment, they answered questions about how they created their shows. Tzuyu, fans learnt, had encouraged Sana and Dahyun to join her sexy-dance creation.

The girls continued to share their feelings with fans before performing “Like Ooh Ahh” and “TT” while moving around the hall to wave at and entertain their fans. They closed out the session with “Fancy” and disappeared from the stage.

Of course, no concert is complete without an encore but this time, the Onces had to complete a series of missions to bring the girls back. Twice closed out their concert with "Knock Knock".

The quests added fun to the concert because they allowed an all-too-rare opportunity for direct participation. The fans eagerly competed with each other to catch the attention of camera staff in the hope that they would be chosen as the persons invited to the missions. And because the concert was packed with true fans, all the missions such as forming a heart with one’s body to resonate with “Heart Shaker” were quickly accomplished.

And so the girls returned to stage dressed in white tees and mint-coloured short skirts to perform “Knock Knock”. To their delight, fans treated them to a special clip of their memories of the band since its debut in 2016. Many of the moments came from the girl group’s concerts in Thailand in 2017 and 2018. And in a farewell, concert goers unfurled banners reading “Once Twice Forever” to show their unwavering love for the band.

Dahyun described the concert as a beautiful memory for both Twice and Onces and the group happily posed with fans for photos before closing out the show with “Signal” and “Stuck”.

And soon after the concert ended, Thailand’s Onces flooded social media with messages describing the concert and their beautiful memories of “TwiceLights”.