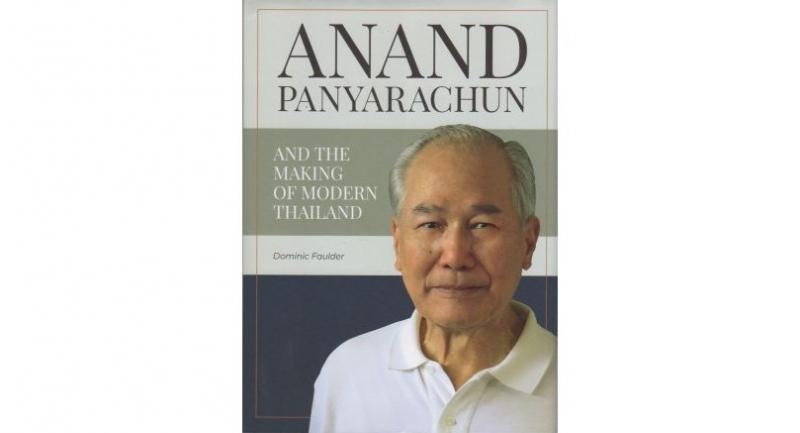 By Paul Dorsey
The Nation Weekend

Perhaps now more than ever, the weary Thai spirit needs to revisit the story of a man who always tried to steer the country towards a better outcome

Anand Panyarachun became Thailand’s prime minister in 1991 in the wake of a military coup and then a second time following what’s aptly enough described as a “people’s coup” against the generals, culminating in the awful conflagration of Black May 1992. What citizens were protesting against at the time was “a sham democracy – a continuation of the junta in civilian attire”.

The crunch of that line could not possibly be louder today.

In his thoroughly absorbing, 500-page biography of a man whose unimpeachable personal and professional ethic continues to inspire hope perhaps more than that of anyone else in modern Thai history, Dominic Faulder demonstrates his fairness in not extrapolating on the “sham democracy” phrase. He knows the parallel with the Thai politics of this very day is amply self-evident.

This is a key part of the tremendous value of “Anand Panyarachun and the Making of Modern Thailand”. Faulder, who’s attached to the Nikkei Asian Review, has not only given us a meticulous portrait of a remarkable, multifaceted individual, but he also illuminates the stunning similarities – and contrasts too – that exist between today’s political scenario and that of just a few decades ago.

The contrasts include the current paucity of public dissent over egregious government disdain for basic freedoms, and over corruption that persists despite being targeted for reform by the Prayut Chan-o-cha regime.

Siam was not and Thailand has never been exempted from the murk and intrigue of political gamesmanship on either a domestic or international scale, but until very recent times there was always evidence of noble righteousness.

Apart from fleeting appearances as a United Nations goodwill ambassador and as chairman until this past spring of SCB, Anand, 86, is rarely seen in the news nowadays. But his name continues to be invoked as an embodiment of that righteousness, as a pragmatic statesman who never lost sight of the public good and the genuine national interest. Faulder’s book illustrates again and again how Anand could alternately be tactful or domineering as circumstances required, and always unwaveringly forthright and honest in a world given to trickery and subterfuge.

The biography – published late last year but enjoying a fresh launch this coming Thursday morning at Chulalongkorn University, where the author will discuss its content (and hopefully current events as well) with Kasit Piromya, Abhisit Vejjajiva’s foreign minister – goes well beyond the promise of its title.

Anand was indeed at the forefront of virtually every occurrence of the past half-century shaping today’s Thailand, by turns a driver and navigator on what Faulder describes as the nation’s “very rocky road to constitutional democracy that has yet to reach its destination”.

As a Foreign Affairs Ministry civil servant, his opinion was sought when Preah Vihear (Khao Phra Viharn) came before the International Court of Justice in 1964. His was the guiding hand when Kukrit Pramoj met Mao Zedong. His was a key voice in getting American troops out of Thailand at the close of the Indochina War in 1975.

This is no mere reading of the historical record, however. None of the associated aspects of these events are overlooked. The expulsion of US forces took place against the backdrop of a homegrown communist insurgency whose divisive legacy continues to pose challenges, and this too is carefully weighed. And the book’s account of the Ramasun espionage incident – the “final straw” in America’s sluggishness to depart – is fascinating.

Anand was Thailand’s acting permanent representative to the United Nations for so long that he was kidded about the “acting” part, and during that time he was also serving concurrently as ambassador to both Canada and the US. He enjoyed his time in those countries, even as he’d enjoyed his schooldays in England, so it came as a disappointment when Chatichai Choonhavan, then foreign minister, ordered him home in 1975 to become permanent secretary at the ministry.

The chapter about what ensued is telling in its subheads – “Ruffling feathers” (among the military), “A new broom”, “Grating the Americans”. Those pushbacks against the old illiberal order, typical of Anand, made him so many enemies that, in the fallout from the 1976 massacre at Thammasat University, masterfully recounted here, he was doomed.

The ferociously anti-communist junta that felled Seni Pramoj went straight for Anand, who “had negotiated with China and shown the American military the door”. Though left with few defenders, he was formally acquitted of what Anand calls “manifestly false” charges, reinstated at the ministry, and named ambassador to West Germany.

Anand’s eventual departure from the civil service and migration into the private sector seemed natural and, if not for what occurred next, inconsequential to politics.

Faulder’s detailed account of the February 1991 coup constitutes a thriller in itself, even if it happened to be “one of the most surreptitious in Thai history”. That same night, citizen Anand was assured, he could go ahead and host as planned an annual reunion of the Old England Students Association at the Shangri-La, where we find a youthful Abhisit mulling a career in politics. Just days later, coup leader Suchinda Kraprayoon asked Anand to be prime minister.

He felt it was his duty to accept, to salvage a country that was “drifting”, but made clear his terms as to when the junta could and could not interfere in his governing. The junta reluctantly agreed and over the next 13 months begrudgingly acknowledged that Anand was both lending it legitimacy and helping the nation move forward.

This was a time, and the reminders are most welcome, when Thailand evolved in a sudden lurch out of the dark ages of telecommunications quicksand and unruly taxis, when social reform became the norm, when genuine progress was seen to be made.

The March 1992 election that ended Anand’s first premiership led to a squabble that saw the junta pressure Suchinda to assume the PM’s post, and then, very swiftly, came the cataclysm of Black May, what Faulder calls “the ‘civilian coup’ that made the greatest impression on global consciousness”. I have read no better accounting of that extraordinary series of events that ultimately required the full, centuries-old and measured might of the monarchy to resolve.

This book, six years’ labour, 60-plus meetings and more than 200 hours of interviews with Anand, cannot be recommended highly enough. It is about Khun Anand, of course, but it’s also about how Thailand came to be the way it is today.

The names of politicians still very much active and influential tumble from the pages. Those of important players now deceased resolve into sharper focus in the modern context, as well as their contributions to it.

And there are many anecdotal surprises along the way, involving for example Asean’s origins and Anand preparing for King Bhumibol’s visit to Montreal in 1967 and sweating because, unlike His Majesty, he couldn’t speak French. Four years earlier, President John Kennedy watched a preview of the movie “The Ugly American”, set in a country much like Thailand, where it was filmed.

Taking umbrage, Kennedy asked his ambassador in Bangkok to request that the King and Queen shun the movie’s local premiere.

His Majesty’s response: “I am going to the opening. You, after all, have ‘The King and I’.”

Anand Panyarachun and the Making of Modern Thailand

Available at Amazon.com, US$24