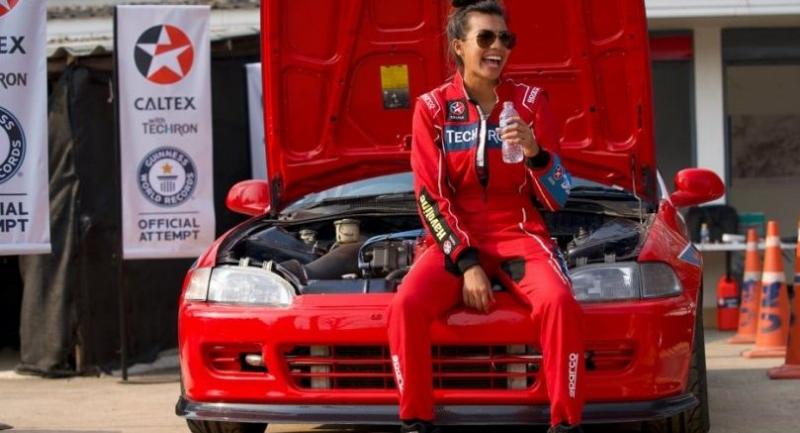 Questions and Answers session with Natasha Chang, who is also known as Chiney Dolly, a race car driver in the automotive reality entertainment series "Record Rides."

1. Can you please tell us a bit more about yourself and your background?

I was born in Florida, to a Puerto Rican mother and Asian father. We moved to Jamaica when I was younger, I fell in love with the island and its culture, people and beauty... and didn't want to leave. I've been involved with the automotive industry both professionally and personally my entire life and have faught tooth and nail for respect in the community for years. I love my multicultural background and I find I see things a bit differently in most occasions. I've been a Tomboy my entire life, I would play video games... and compete when I was younger- Counter Strike, Warcraft and now DOTA/HON so I've always been somewhat of the only woman. I've learnt to be tough over the years and more understanding of disagreements, egos and having to respectfully earn your place in something you love.

2. What first sparked your interest in driving?

My grandfather was a classic car enthusiast. He collected classic Jaguars, and our favorite times together were fixing things then taking them out for a spin.

But it wasn't until my friend Joel invited me to drive a go-kart that I was hooked. Since that day- I've never looked back. I've done and raced in almost every genre of racing.

3. What were some of the challenges you faced along the way?

Being a tomboy from an early age was easy... the difficulty started when I was a teenager. I always laughed that I looked like a Chinese boy until I was 16- At that point a lot of things changed. It became hard being a Tom boy loving cars and video games, I was constantly having to prove that the things I've loved all my life wasn't for attention.

People would say that I liked cars because I was young and wanted to be in the "Crowd." But I knew that this was a love that would stay with me forever, It would just grow and change with me... and so it has. Even with racing in my adult life, being a woman or a minority in anything you do comes with added work and effort. It may not be right or wrong, but it is what it is... I've learnt to love the challenge. My parents always said to me- you show up early to anywhere you're going, with respect and class- eventually people will listen and respect you.

4. What continues to motivate you to excel in this sport?

I've given racing a break once in my life- I was miserable. Racing is something that you crave... that euphoric feeling when I'm in the car.

I'm super competitive, so I can never do something half way. With racing, there's never the same race, never the same car. I've had amazing opportunities in my life to drive great cars, but there's only forward.

5. How long have been you been racing?

6. Do you currently face any challenges being in a male dominated sport?

When I just started yes. I wasn't taken seriously, people would bully me and say I didn't belong. But I always took it with a smile.

As an adult, not so much. Women have made leaps and bounds in racing and have proven that we can do it to. Motor racing is the ONLY sport in the world that men and

women can compete in equally. So I always say- I'm a drive like any other.... and i probably know more about cars than most.

7. What is your routine when preparing for a race?

When I was younger, I would put on a great playlist sit in my room alone and paint my nails. I took it as a form of meditation, just to be able to relax and not think about

anything else other than what I was doing in that moment.

Recently I do the same... minus the nail painting.

8. What spurred you on to take up this Guinness World Record challenge?

Well..... I didn't think too hard on the actually Guinness World Record- my fiance and I are always up for new adventures, traveling around the world and meeting new people.

For me, this wasn't just about a world record. It was the adventure of it all... and it did NOT disappoint!

9. How was your experience on Record Rides?

Unbelievable. Never did I think I would have the opportunity to do something this cool.

To travel across the world, for a National Geographic show doing such amazing things going on such amazing adventures.

My co-host, the guys behind the camera... everyone was wonderful to work and just hang out with!

Not to mention- I've found a new respect for the TV industry.... that was a lot harder than I would have ever imagined.

Watching the show... All i hear when I see me on camera is my goofy laugh and see how dorky I really am. But I've embraced it and over the years I've learnt what I think is very important. The ability to laugh at yourself.