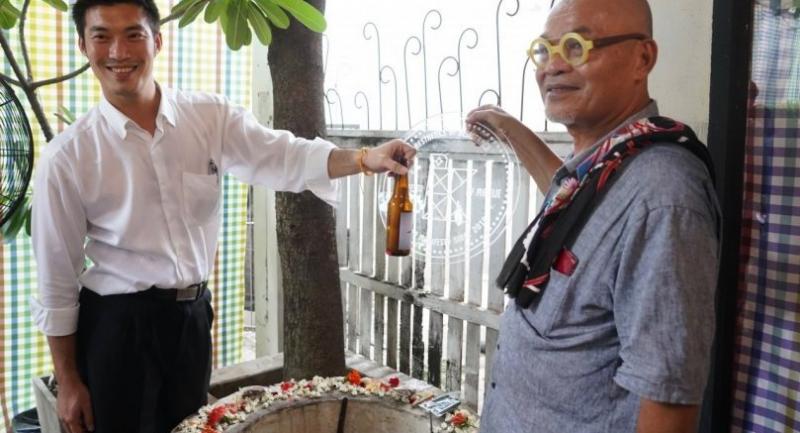 Junta foe Thanathorn Juangroongruangkit and art critic Thanom Chapakdee lay a commemorative plate inscribed with the words “Aesthetics of Resistance” at the launch of the Manifesto by Maielie gallery in Khon Kaen on Monday. Photo courtesy of Ekkalak

Artists lead the political activism charge in the Northeast, pressing to revive democracy The plate also bearing the gallery’s name has been sealed in a “time capsule”. Photo courtesy of Ekkalak Napthuesuk

Art activists in Khon Kaen on Monday – the 87th anniversary of the Siamese Revolution – launched a campaign for amendments to the junta-sponsored Constitution, vowing to make the highest law in the land more democratic for the benefit of the country and the people.

Art critic Thanom Chapakdee led a group in unveiling a “manifesto” of sorts – the Manifesto by Maielie gallery in the city centre. (Maielie combines the Thai word for “new” with the Isaan term for “really”.) The day was deliberately chosen to coincide with the anniversary of the establishment of a constitutional monarchy in Thailand on June 24, 1932. The political film “Forget Me Not” by Chulayarmnon Siriphol is screened. Photo courtesy of Ekkalak Napthuesuk

Political activity was banned during the five years following the 2014 coup, a period of repression during which socio-political activism seems to have been fermenting out of sight. Now political interest and activism have re-emerged in a fever. Visual artists and musicians are ready to campaign in earnest for a return to full democracy.

Thanom, 61, said the new art gallery where he serves as director is actually more of a “cultural exchange centre”.

“Artists, activists and other local people can share their ideas, however provocative,” he said. “The people of Khon Kaen have always had a rebellious spirit and we want to see more of it.” The revival of passions was first glimpsed in the art festival Khonkaen Manifesto held last year, for which an abandoned building on Mitraphab Highway became a creative space for dozen of artists pursuing socio-political themes. The festival opened on October 6, 2018, the 42nd anniversary of the Thammasat University massacre in Bangkok.

Eric Bunnag Booth and his stepfather, French art collector Jean Michel Beurdeley, have enjoyed success with their Maiiam Contemporary Art Museum in Chiang Mai and now want to spread their wings into the Northeast. The renovated former caf้ will be displaying provocative art when it offiฌcially opens next February.

They were involved in converting a two-storey former cafe into Manifesto by Maielie, which will officially open next February. It will display art as well as serving as an archive of art activism in Isaan.

Politically, Khon Kaen – known as “the capital of the Northeast” – has been a hotbed of activism, especially in recent decades. It was the primary base of the red-shirt movement that backed the Shinawatra clan, first through the Thai Rak Thai Party, ultimately Pheu Thai.

But Pheu Thai lost considerable ground in the Northeast in the March 24 election to the Phalang Pracharat Party, which backs the military junta that felled Yingluck Shinawatra. And meanwhile the anti-coup Future Forward Party is keen to make further inroads into Isaan. “The junta that ruled after 2014 ignored the arts and culture scene that is so central to the people,” Future Forward leader Thanathorn Juangroongruangkit said at the gallery opening. “It’s a great idea for this gallery to reflect art and culture that give voice to the local people.”

Guests at the opening got to see the politically toned film “Forget Me Not” by Chulayarmnon Siriphol, hear Isaan folk songs and greet a surprise guest – young activist Jatupat “Pai Dao Din” Boonpattararaksa, newly released from prison after being jailed for lese majeste. Eight-seven years ago, the Siamese Revolution led by the People’s Party spurred the Kingdom’s historic transition from absolute to constitutional monarchy. In response to the bloodless coup, King Rama VII agreed to a codified constitution.

“Within just 15 years, through to 1947,” architecture scholar Chatri Prakitnontakan told The Nation on a separate occasion, “the People’s Party introduced many significant policies. It uprooted the longstanding dogmas and norms with the aspiration to develop and modernise the country in different aspects, which were also manifested in art, design and architecture.”

The People’s Party promoted “the Six Principles”, he noted. These were aimed at ensuring citizens political, judicial and economic independence, national security, equality, liberty and education.

The People’s Party also decreed that every province should have a Democracy Monument like the one in Bangkok. The one in Khon Kaen was among the first completed and today is again a gathering point for political demonstrations.

But Khon Kaen also has a statue of Field Marshal Sarit Thanarat, the dictator who ruled Thailand during the 1960s. It’s there because of the progress Sarit brought to the Northeast – new roads, electricity, and the like – as part his strategy to counter popular support for a communist insurgency. He is still esteemed locally as a great patron.

Art critic Thanom senses that now there is “too much” progress. The benefits that citizens might have derived from a national development plan are being blocked by mega-projects thrust on them in a spate of unbridled economic expansion.

Whether the money comes from the state or foreign investors, he says, the logic of endless modernisation always comes at the cost of a marginalised community.

This, he says, is the predicament for Khon Kaen people, drowning under ceaseless waves of what’s called “progress”.

“What we want to do is echo the turbulent past and express a local identity,” Thanom says. He expects much of the art to be shown at the gallery to be politically forthright, with clear references to the military regime and limitations on free expression. The assembled artists formally placed a clear-plastic plate inside a commemorative “time capsule” jar along with other illustrative items. The plate is engraved with the name of the gallery and the words “Aesthetics of Resistance”.

It’s meant to recall the metal plaque that was embedded in concrete in the Royal Plaza in Bangkok to commemorate the 1932 revolution. That plate was removed in April 2017 under circumstances the junta neither disclosed nor publicly investigated, and replaced with another praising the monarchy.

In November 2014, six months after the coup, a monument in Buri Ram commemorating the first constitution was removed, ostensibly because it was blocking traffic. It was destroyed, but eventually a replica replaced it.

“It commemorated the government’s victory over a pro-monarchist rebellion 80 years ago.” Prince Bowordet led that failed revolt in 1933, seeking to restore absolute monarchy.

“Stay tuned,” Thanom told the guests. “Let’s meet again on Constitution Day, December 10, with special art events calling for our democracy to be returned to us.”