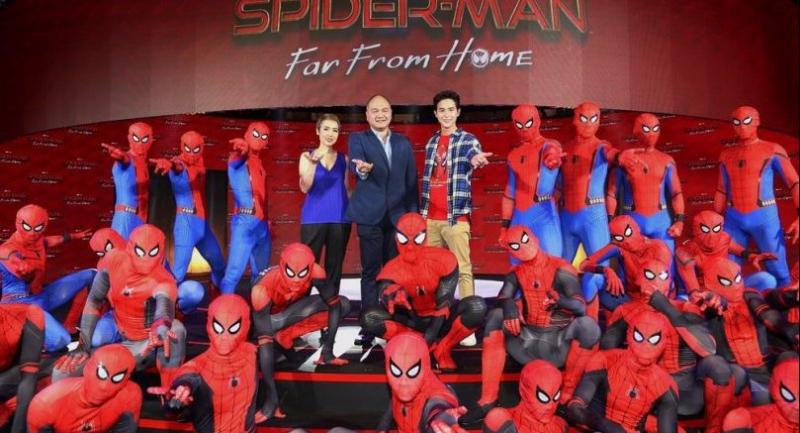 Some 50 stuntmen dressed in Spider-Man suits thrilled the audience on Friday at Siam Paragon’s Infinicity Hall as they posed in the Marvel superhero’s fighting stances and imitated his signature 3-fingered web-shooting hand gesture during the gala premiere of "Spider-Man: Far From Home”.

Screams rang out as actor Jirayu “James” Tangsrisuk, who rose to fame in Channel 3’s hit 2013 TV series “Suparburoot Juthathep”, came out on stage.  Looking smart and relaxed in casual gear, he delighted fans with his impersonation of Peter Parker. “I like Peter. He’s funny and playful and he’s a really cool dude,” said the 26-year-old actor, who says he has been a fan since seeing Tom Holland portray Peter Parker in “Spider-Man: Homecoming”. “Spider-Man: Far From Home” is the sequel to the 2017 movie and sees Holland reprise his role as Parker and Spider-Man, alongside Samuel L Jackson as Talos, A Skrull hired by Nick Fury to impersonate himself, the former director of S.H.I.E.L.D, Zendaya as Parker’s classmate Michelle or MJ, Jacob Batalon as Parker’s best friend Ned Leeds, and Jake Gyllenhaal as Quentin Beck or Mysterio, a master of trickery and illusion and an expert on the Elementals who claims to be from Earth-833 in the Multiverse. In the film, Parker is recruited by Nick Fury and Mysterio to face elemental threats from another dimension while he is on a school trip to Europe. The movie was shot in England, the Czech Republic, Italy, and the New York metropolitan area.

“Peter Parker wears four Spider-Man suits in this latest sequel including one created by Tony Stark,” revealed Dujdao Promobol, marketing executive director of Sony Pictures Thailand. “They all have names too, namely the ‘Original Stark Suit’, the ‘Iron Spider Suit’, the ‘Stealth Suit’ and the ‘Red-and-Black Suit’. “You’ll be on the edge of your seats from the first few seconds of the first scene until the two post-credits scenes,” she added.

And while “Avengers: Endgame” may have “end” in the title, it’s “Spider-Man: Far From Home” that will be the finale to the Marvel Cinematic Universe’s Phase 3.

“Spider-Man: Far From Home” opens on Wednesday at cinemas nationwide.