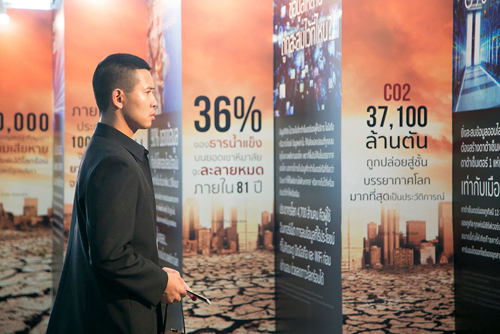 Knowing Buddha Organisation (KBO) has launched a new campaign on climate change, blaming the Internet for causing rapid global temperature rise in the past two decades and calling for the public to cut down Internet usage as well as delete unnecessary digital data as much as possible.

“While it's true that greenhouse gases emissions are the main culprits of climate change, it's the surge in Internet use that has accelerated the warming to the crisis point,” said Acharavadee Wongsakon, the KBO’s president. “We’re urging you to take four hours to be completely offline. Turn off your router or put your phone on aeroplane mode at least once a week.” The campaign was launched as part of the climate change seminar, “A Way Out of Climate Crisis: The Unspoken Truth”, organised by KBO Earth, a new unit established by the KBO to work on climate change issues and to share new information through numerous scientific facts and studies presented by prominent scientists and researchers. The event, chaired by Deputy Permanent-Secretary of Digital Economy and Society Ministry Somsak Khaosuwan, was attended by more than 400 participants from the public, private, and civil society sectors. As the laws of physics goes, energy does not disappear but only converts its form. Microwaves, when emitted from its sources, scatter through the atmosphere and can penetrate the surface, the water, ice and objects. There is water vapour in the air everywhere. When the wave travels through the air, the friction causes heating at the molecular level. The process is called Radio Frequency Heating. It is how food is cooked by microwave.

“While a few mobile devices may do no harm, the current number of mobile phone users, which stands at almost five billion so far, can turn the world into a giant microwave. The more digital data generated and stored, the more heated the atmosphere is heated. Data centers never sleep. They have to work 24/7 keeping the data available for us whenever we want it. Not only does the process consume huge amount of energy, but also generates so much heat most data centers are located in cold climate areas or equipped with comprehensive cooling systems all the time,” the radar and microwave expert pointed out. As for Thailand, Somsak said while Thailand is fully committed to make the Internet accessible to everyone in the country within a few years, the government has also prioritised increasing green areas in the country. So far, it has confiscated hundreds of thousands of acres from forest encroachers nationwide and reforested several areas. Royal Forest Department Director-General Attaphol Charoenchansa said in his speech that the Thai government has tried to increase forest cover on both public and private land by promoting reforestation that also has economic value. “The cabinet has recently approved the amendment of forest laws to allow the use of trees grown in these forests. The department has also enforced the law against encroachers more strictly with more severe penalties. Our goal is to turn more than half of the country’s total area into forests.”

Meanwhile, what Thailand and the world can do is to minimise the Internet usage and delete unnecessary digital data from smartphones, cloud system, computers and the Internet system, Acharavadee said, noting these actions could quickly ease the problem. This is deemed necessary in light of the 2018 UN Special Report’s statement that climate change impacts would be irreversible unless the world is able to cap the temperatures to not exceed 1.5 °C above pre-industrial levels within 12 years. The organisation plans to send a letter to Google Inc to ask the tech giant to issue a policy to delete old, unnecessary data from its servers in order to free up space for new data storage and avoid the need to build more data centers. It will also send a letter to the National Aeronautics and Space Administration (Nasa) asking it to look into this issue closely.

Last November, the KBO sent an open letter to UN Secretary-General Antonio Guterres to call for the international community's attention to the issue and promote public awareness and encourage people to cut down Internet use while planting more trees in their communities. “We need to start now because the climate change problem is now at crisis point. Humans must slow down all Internet-related activities and innovation. We have to be less dependent on technology and the Internet and return to more natural living,” the KBO president said.