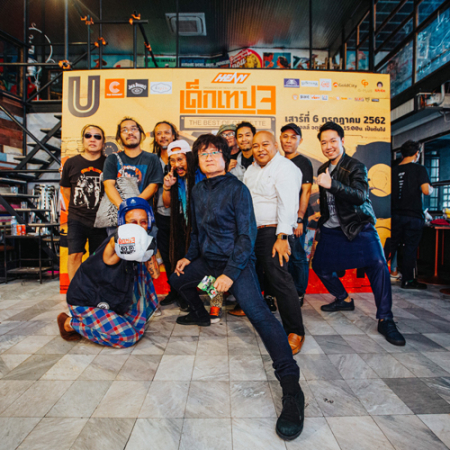 Dek Tape – the original retro concert featuring old-school artists from the 1980s and ‘90s – is returning for a third year and will be staged at the hall on the sixth floor of JJ Mall in Chatuchak this Saturday (July 6) from 3pm to midnight.

“I think this third concert will be as phenomenal as the first two,” says Kittipong Tanarakwong, brand manager of Boonrawd Trading, one of the sponsors. “My first tape was an album by Micro.”

Organisers and supporters make the power sign at the press conference for “Dek Tape 3” at Fang Pls, a pub and restaurant on Soi Phaholyothin 17.

The story of Dek Tape goes back to 2007 when the “Alternative Thai Festival” concert was organised by Kodindy at Bangkok Hall of Suan Lum Night Bazaar.

“I started dreaming about putting together a concert featuring the artists we miss and whose musical works still inspire passion in us. That festival brought together most of the ‘alternative’ artists from the 1990s. Now, 12 years later, we are calling it ‘Dek Tape’. Every time I stage the Dek Tape concert, I’m happy to see friendsfrom30 years back,” adds Burintorn “Heng” SaeLor, founder of Kodindy and Heavy Organizer.

Organisers and supporters make the power sign at the press conference for “Dek Tape 3” at Fang Pls, a pub and restaurant on Soi Phaholyothin 17.

“The words ‘Dek Tape’ came out of my mouth quite by accident while we were talking about the good old days and Heng immediately seized on them,” explains Montree “Art” Mankhong, managing director of Heavy Organizer, and a fan of Carabao and Blackhead.

And the name is entirely appropriate as it refers to the artists of that era who recorded their albums on cassette tape and inspired an entire generation.

“Our aim with this third edition to showcase the mood and tone of those years,” Heng adds.

“Blackhead’s special show will see us jamming with our friends Phi Ing and Phi Um on the same stage and we’ll also serve as the backup band for both of them. Fans can expect to hear Ing’s ‘Chan Yang Yoo’ and Um’s ‘Rak Muang Thai Mai Tai Rok’,” says the band’s frontman Arnon “Poo” Saisangchan. “I think that fans from that era have longer memories than the younger generation. Back then, people would listen to the entire album from first track to last and so were able to appreciate and understand the story and concept behind it. Today, they simply click on the song and move to another one before it’s even finished,” Rang laments, adding that his special guest for Saturday’s show is his daughter, Nong Metal.

Saturday will also mark the first time the Kai-Jo Brothers will be back on stage since the death of their songwriter-guitarist-singer and founder Adisorn Kingpayom in 2011. “It is a reunion of Kai-Jo Brothers’ original members. I’m excited about performing on the same stage as my favourite artists, especially Rang Rockestra. I saw his concert in Songkhla. For Blackhead, I was a director on their music video of Blackhead before joining the reggae band,” Sorapan Kingpayom says.

Joining them on stage will be medical laboratory technologist and artist Morlab Panda and film director Yangyong Kuruaungkoul, whose movie “2538 Alter Ma Jeeb” was inspired by the ’80s. “The first cassette tape I bought was Boyscout’s album. I remember rewinding the tape with a pen and pasting scotch tape on the torn bit,” Morlab Pan laughs.

“It was my first movie and I wanted to make a film about myself and the period I grew up in. Young people today are very different and have everything at their fingertips. The movie, which sees the main character travel back in time to the alternative era, took us back to the charms of using a pager or the ubiquitous photo sticker. It’s set in 2538 or 1995, which was the beginning of alternative music scene and features songs in each of the scenes,” said Yanyong.