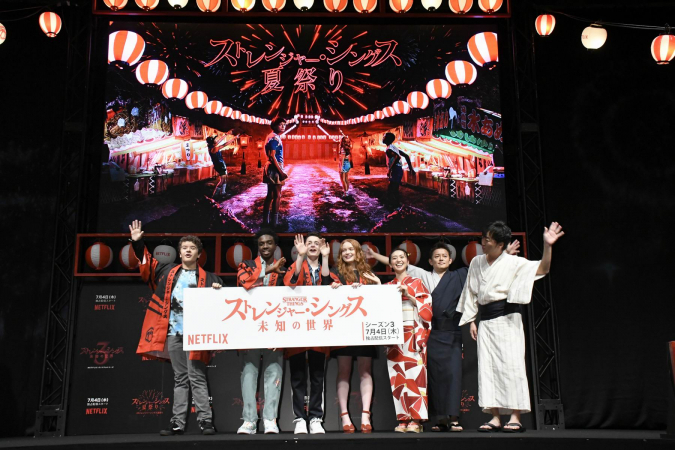 With two highly successful seasons under its belt, Netflix last week flew the international media to Tokyo to chat with cast and crew of its original series “Stranger Things” before season three launches today.

The day after the festival, the young cast gathered for a brief interview with the international media and were animous in saying that season 3 is their favourite so far, adding quickly that they couldn’t spoil the suspense by saying why they liked it.

“I can’t really say what my faovourite part is because it all happens in the last few episodes of this season. It’s the same formula but the storyline is totally different. There are new characters and the storyline definitely has a different feel to it,” McLaughlin says,

“The ending is very sad but I like it,” comments Schnapp while Matarazzo adds that it's an emotional season and heartbreaking too. “There are tears,” he says. The science-fiction horror series is directed by the Duffer twins and set in the fictional rural town of Hawkins, Indiana, in the early 1980s. The story begins with the disappearance of Will (Schnapp), one of the main characters. Will’s friends try to find him amid a series of supernatural events.

In the upcoming new season, the Hawkins crew are on the cusp of adulthood. Romance blossoms and complicates the group’s dynamic, and they have to figure out how to grow up without growing apart. Danger looms, and to survive they hope their friendship is stronger than their fear. Life has more or less gone back to normal at the end of season 2 and the new story takes place one year later and in summer instead of autumn. The sun is out and the town has its first mall, Star Court, which has ruined trade for the shops but is nonetheless the favourite hangout, especially among the kids. The new season focuses more on teenage life, particularly how each gender copes with their romances and friendships.

“I love the two storylines between the couples and how they’re both talking about each other. And the same arguments, they are there too.

Once you become a teenager, like all of us, you get more freedom and responsibility and so we’re more on our own and not merely relying on our parents,” says McLaughlin.

“The show is kind of about what it’s like to be a teenager, but it’s also different because it’s set in a different era. Kids these days aren’t granted as much freedom as kids in the ’80s. It’s hard to compare them but some things just don’t change like normal growing up stuff,” Sink adds.

Even though the youngsters have been in the spotlight since the show debuted in 2016, with the exception of Sink who joined the series in Season 2, they are still not used to fame and having fans approach them all the time. “It doesn't really happen because I'm at home. Like in my town, it never really happens. I come on these press tours or to Atlanta. And I’m like in a really heavily populated area and I start getting asked for a photo. But it often really depends on where I am,” adds Matarazzo, who plays Dustin, one of the most popular characters. Like his nerdy character, Matarazzo suffers from cleidocranial dysplasia (CCD) and has no teeth. He uses dentures as a result of his condition and uses his fame to raise awareness about it.

The fame of the young actors never ceases to amaze Schnapps who plays Will,  the central character in the first two seasons.  “Sometimes I sit down and think like, wow, I never would have expected this to ever happen to me but here I am now, if you asked me five years ago or even two years ago if this happen, I would have said no.And I'm just really grateful it did.”