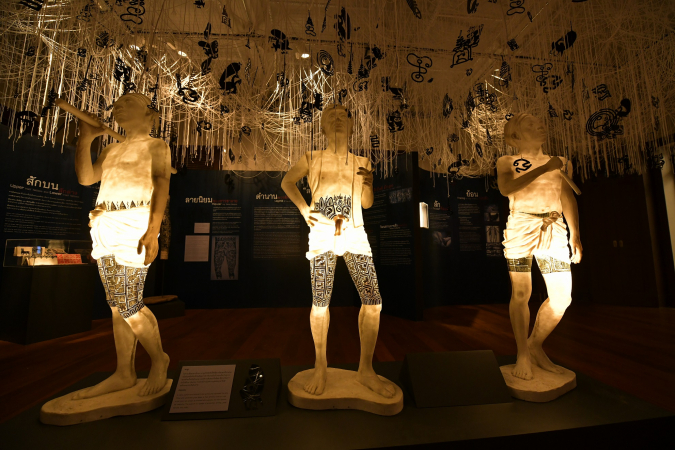 The tattoos of Lanna people of northern Thailand is on exhibit at the exhibition “Tattoo COLOUR, Tattoo HONOR” that runs through October 27 at the museum on Sanam Chai Road.

Long before body art became a fashion statement, it played a major role in culture and symbolism, with meanings ranging from giving magic powers to showing respect and protecting from danger.

Now Bangkok’s Museum Siam in collaboration with the National Taiwan Museum and the Taiwan Cultural Centre in Thailand is exploring cultural heritage through body art in the exhibition “Tattoo COLOUR, Tattoo HONOR” that runs through October 27 at the museum on Sanam Chai Road.

This is the first time Thailand is showing tattoos from three indigenous groups: the Atayal and Paiwan from Taiwan and Lanna from Thailand, which illustrate courage, honour, wisdom and beliefs.

The exhibition also features a variety of rare exhibits including a carved wooden puppet, a carved wooden hand and historical photographs of indigenous tattoos plus a documentary about tattooing, discussions and workshops.

“The collaboration between the National Discovery Museum Institute (Museum Siam) and National Taiwan Museum shows that tattoos are not only given for aesthetic purposes but also signify honour and pride in the indigenous traditions both in Thailand and Taiwan. ‘Tattoo COLOR, Tattoo HONOUR’ will encourage learning and understanding of cultural heritage and the history of indigenous groups as well as preserve them,” says Assoc Prof Dr Boonyong Rattanasuntharakun, acting president of the Office of Knowledge Management and Development 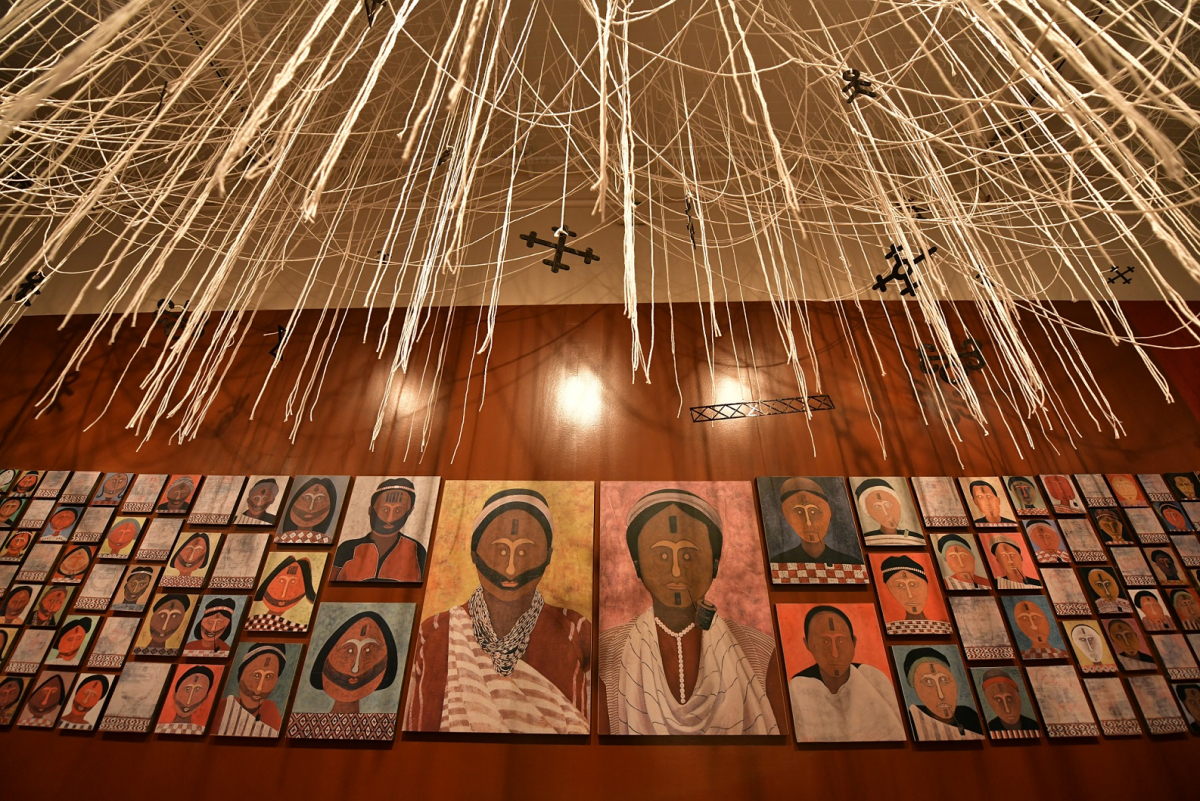 Tattoos based on patterns, characters, numbers or various animal shapes have long been a part of human culture and visitors will be able to learn why people opt for body art, a decision that differs from society to society depending on customs, magical power, sacredness, power or aesthetics. Tattoos are embedded with implications, symbolism and cultural meanings and thus reveal the beliefs and cultures of a particular indigenous group.’

Males from the Paiwan indigenous group living in southern Taiwan have tattoos on the body while women have the art on the hand. The tattoos indicate social status and responsibilities although only those who are of high rank in the tribe are able to have the tattoo. The art reflects social honor, indigenous traditions, wisdom and religious beliefs, which makes tattooing aesthetic but also demonstrates sacredness and social relationships in that one must be granted permission or acceptance from the group before having the tattoo.

The exhibition also showcases the tattooing of the Atayal indigenous group who live in northern Taiwan who they have a tradition of facial tattooing for men to show courage and strength and for women to show weaving skills. This kind of tattooing was accepted in the first half of the 20th century. After Japan came to play a role in governing and social order, tattooing was considered uncivilized. But while many people underwent surgery to remove their tattoos, others continued to have them in secret. 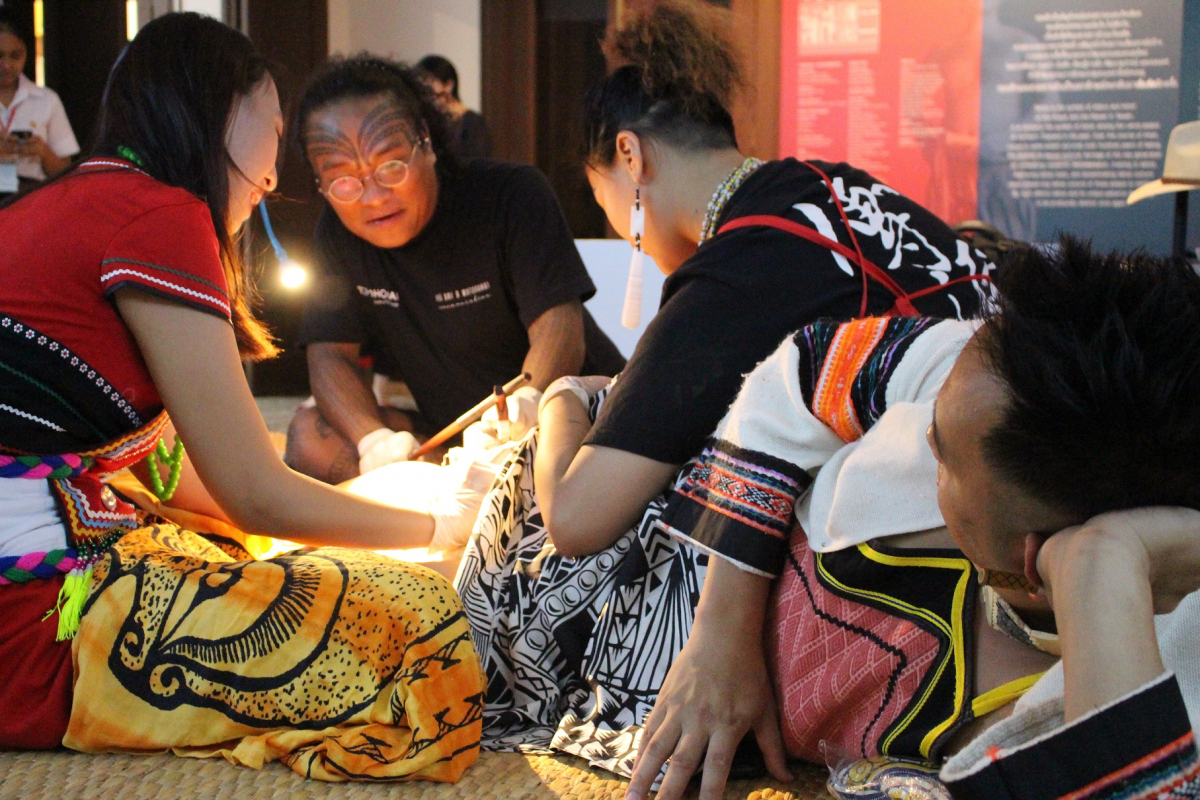 The Atayal believe that only those who have a facial tattoo can cross the Rainbow Bridge after death. This bridge is a gateway to the spirit world where one can reunite with his ancestors. For men, facial tattooing requires courage as a hunter; they must hunt big wild boars or other large animals or bring back the head of their enemy to prove their courage. Women need to prove their diligence and weaving and agricultural skills. Only after getting the facial tattoo will they be accepted as Atayal.

Meanwhile the Thai exhibit focuses on the tattoos of Lanna people of northern Thailand. Lanna tattooing culture is divided into 2 parts: the upper part from the waist up to the arms and the head called Sak Ya Kham (invincibility) and Sak Piya (lucky charm), and the lower part from the waist down to the feet called Sak Kha Lai and Sak Kham Priew (protection from poisonous animals).

Sak Ya Kham, Sak Piya and Sak Kham Priew are made with soot ink mixed with animal bile and herbal medicine or sacred elements. The tattoo takes the form of a character, talisman or an animal figure, and the tattooist chants while tattooing. However, for Sak Kha Lai, the tattoo takes the form of animal figure in a square or rounded frame located from the waist to the leg without the tattooist chanting or using sacred medicine. This kind of tattoo is to test patience, courage and manhood.

Sak Kha Lai tattooing is a sign of manhood, courage and patience that one can practice voluntarily, and it is an expression of the Lanna tradition among men through the animal patterns, such as rats, weaver birds, vultures, lions, bats, musk, painted storks, tigers, elephants, monkeys and Hanumans according to beliefs from Buddhism and Hinduism. 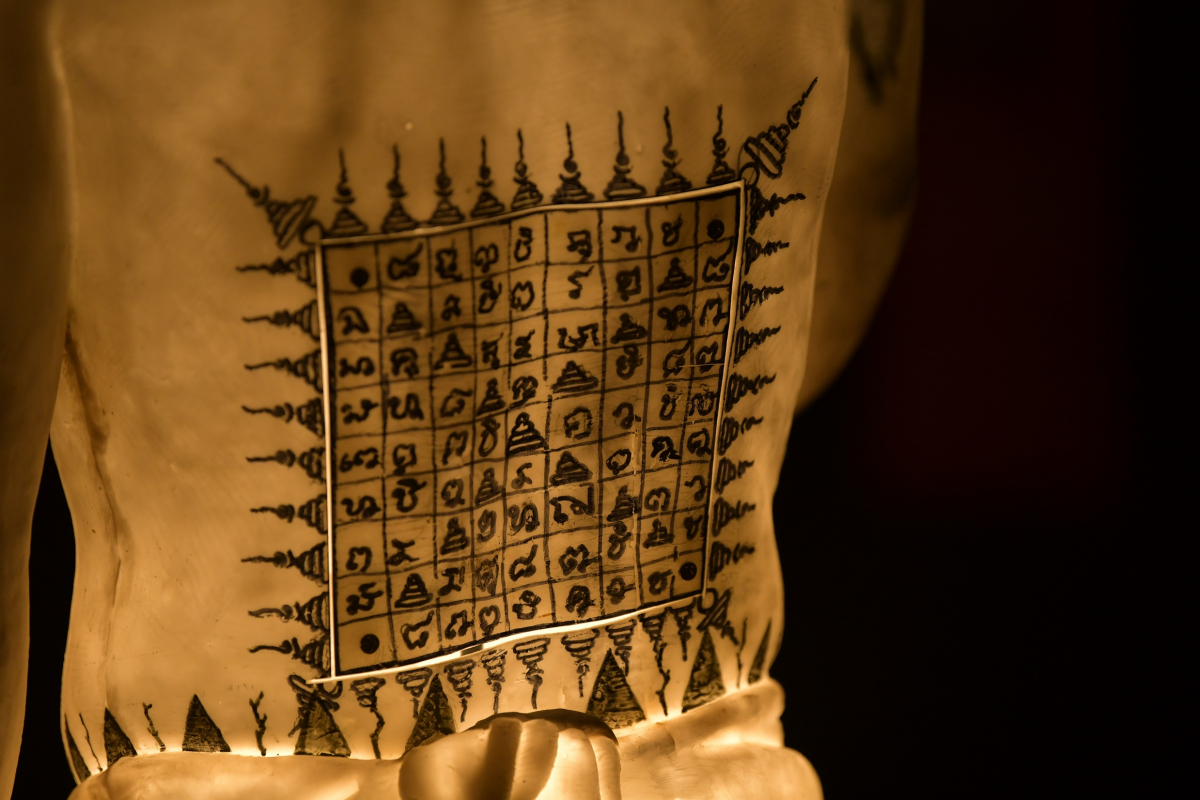 Other patterns are also popular, such as flowers, big lizards, lions, peacocks, clouds or winds. Sak Kha Lai tattooing is traditional tattooing without herbal medicine, elements or spells. Before tattooing comes a ritual of paying respect to the teacher by presenting betel nut, betel leaf, and tobacco and donation money. The more money, the more beautiful and refined the patterns. After it is finished, the tattooist will have the person eat rice, chilli, salt and water and tie a white thread on the person’s wrist.

Visitors can also attend discussions and workshops facilitated by experts in cultural heritage from Thailand and Taiwan on tattoos that tell a story, relate ethnic history and reflect value. The art of tattooing can also be learned through the creation of a rubber stamp.

For more information, call Museum Siam at (02) 225 2777 or visit the website www.museumsiam.org or www.facebook.com/museumsiamfan.