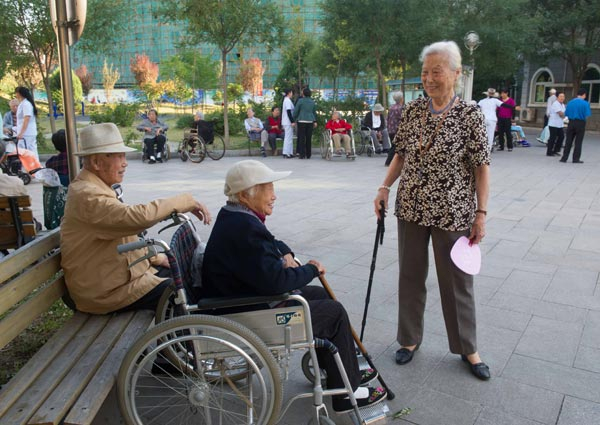 Senior citizens chat at a retirement home in Beijing. [Photo/Xinhua

China plans to install more than 20,000 elevators by the end of this year to promote accessibility for the disabled and senior dwellers of old residential buildings that have limited modern equipment.

The program came as the country marks the seventh anniversary of a landmark regulation introduced by the central government to boost physical accessibility in new facilities and buildings.

Launched by the China Commission of Promotion of Publicity for the Undertakings of Chinese Disabled Persons earlier this year, the program has seen 2,000 installations completed in a number of provinces including Jiangsu, Yunnan and Henan, according to the commission's deputy secretary-general Xu Gang.

Xu, while speaking at a news conference on Friday, said the program is expected to help tens of millions of senior and disabled inhabitants of old residential buildings and is crucial for their equal participation in society.

"The input into an accessible environment ... is a major symbol of social progress," he said.

Xu said China has an estimated 85 million people with disabilities craving for accessible designs. The need was also fueled by the country's fast-aging population.

The National Statistics Bureau said in January that China had almost 250 million people age 60 and above, accounting for 17.9 percent of its population.

A 2016 survey conducted by the Office of National Working Commission on Aging found more than 40 million seniors had limited or no capacity to take care of themselves.

Chen Zhenhua, head of the office's information technology department, said Chinese seniors have an average eight years of poor health before they reach a life expectancy of 77 years old, and many are victims of bone and joint diseases.

"That has seriously affected seniors' mobility and social participation," he said.

In 2016, the office, alongside the Ministry of Housing and Urban-Rural Development and dozens of other departments, issued a guideline on creating a senior-friendly environment, which kicked off a flurry of programs aimed at renovating old residential buildings with limited accessibility for vulnerable groups.

China had about 170,000 such old communities nationwide, and about 5 million elevators are needed to improve living conditions for more than 42 million families, the vice-minister of housing and rural-urban development Huang Yan said at a news conference early last month.

As of last year, more than 10,000 elevator installations have been finished, and another 11,000 elevators were either under construction or going through the approval process, she said.

In addition, China also renovated almost 3 million homes for families of disabled people between 2016 and last year, according to a white paper released last month by the State Council Information Office.