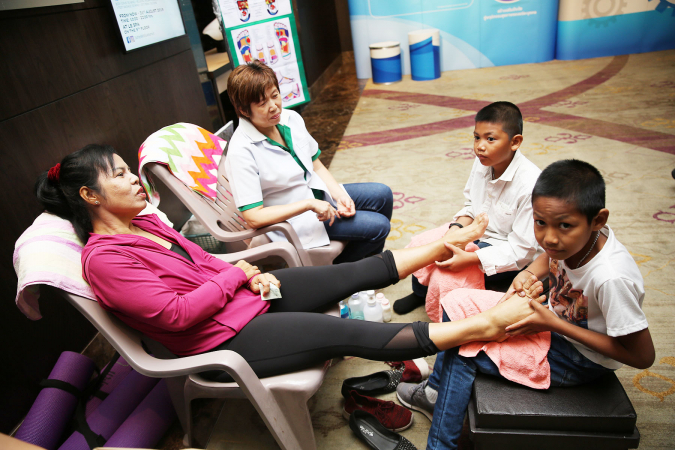 A three-year proactive health programme that aimed to encourage Thai people over age 45 to adopt health behaviours and so help ensure the country becomes a healthy ageing society has successfully concluded.

The “Pfizer Healthy Ageing Society”, programme successfully improved the physical and mental health of more than 90 per cent of the participants in Bangkok and Ubon Ratchathani and reduced risks associated with non-communicable diseases, according to a joint announcement from the Pfizer Thailand Foundation and Kenan Foundation Asia.

The programme also trained a workforce of 40 expertly trained 40 competent workforces or ‘change agents’ who went on to initiate 27 medium-sized development projects to benefit their communities.

The partners also announced their readiness to further collaborate with government agencies at the national level toward the adoption of the model project in order to build capacity and raise awareness on good health and financial security, reduce health-social-economic impacts, and promote sustainability toward entering a quality ageing society. 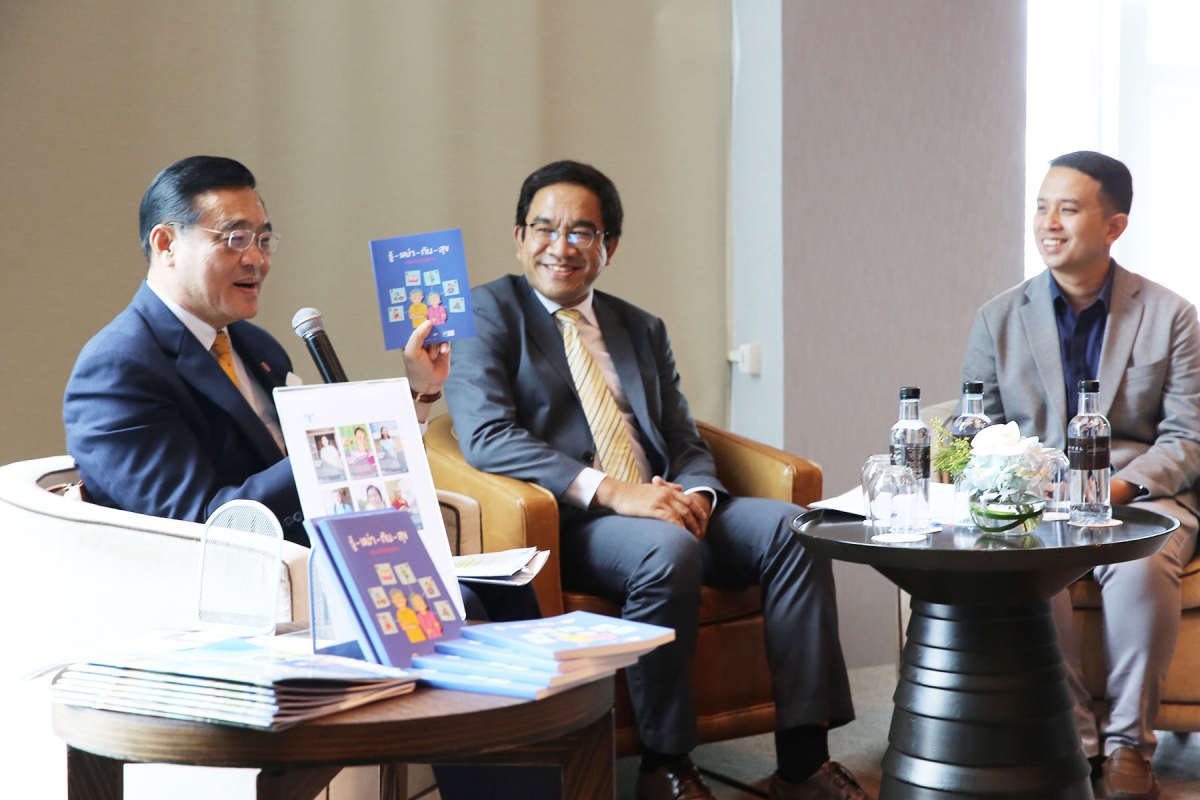 “After the project ends, we will work on the issue in other aspects by using the data from the project,” said Dr Nirutti Pradubyati, the medical director for Pfizer (Thailand) Limited.

The prime mission was to develop “change gents” through workshops and educational activities specifically designed to enhance knowledge and essential skills which related to physical health, mental health and financial security. The proactive programme had been driving a deep understanding of essential topics such as non-communicable diseases (NCDs), nutrition, mental health, financial literacy, a supportive environment for elderly citizens, welfare, and community analysis. In term of the outcome, the programme successfully promoted knowledge for 41 change agents, who became a competent workforce and constructively organised 27 development projects to promote sustainable health in their communities.

The programme also published 2,000 handbooks on the Pfizer Healthy Ageing Society to promote good practices for healthy living to ensure benefits for all ages. Also, the project conducted a policy recommendation process built on the data collected through interviews with thought leaders in the public and private sectors as well as civil society and academic organisations. The report provides recommendations touching upon key agendas, including a paradigm shift toward an active ageing society, career opportunities and the promotion of lifelong learning, financial literacy and skills development, promoting good health and changing the environment to facilitate life for all ages. The project aimed to achieve practical results in national policy toward the preparation for an ageing society encompassing health and socio-economic perspectives,” said Dr Nirutti.

Piyabutr Cholvijarn, the president of Kenan Foundation Asia, said the project was launched to encourage the change agents to adopt positive health and financial behaviours and become a holistic model for their communities. Primary objectives included building the capacity of the change agents to prepare for a quality ageing society, to drive positive attitude and behavioural shifts towards healthy ageing in order to reduce the risk of illness from NCDs in pre-elderly and elderly groups, and to create good practices for the preparation of an ageing society which are sustainable and adaptable to the context of Thai society.

The three-year project has been successful in building a strong network at the local and national levels with supports from 14 agencies whose staff have served as steering committees. Specialists and advisors from 21 local stakeholders and more than 12 academic institutions took part in the capacity-building programmes for the target participants. Meanwhile, a total of 181 participants have completed the training. Some of these participants have successfully become change agents and further created 27 development projects to benefit 5,000 residents in their communities. Good samples of the interesting projects include a yoga exercises programme by a group of health lovers who are from Klong Toei Community Flats 1-10, and a project by change agents who are teachers at Rattanakosin Somphot Bang Khunthien School that provides students advice on proper nutrition and encourages overweight students to keep physically active and exercising.

In the project monitoring and evaluation, the survey finds that on the topic of physical health, 90 per cent of the respondents said they have a basic understanding (knowledge) about exercising. They realise that an individual needs to exercise least three times a week, for 30 minutes each time. They also have a basic knowledge about NCDs such as high blood pressure. The participants have a good perception (attitude) towards health care, resulting in the shift of their behaviours (practice). For example, more than 86 per cent of the participants receive an annual physical check-up, while more than 80 per cent perform an easy exercise such as arm swinging during walking or keeping physically active with household chores. For their eating behaviours, the survey found a decline in consumption rates of sugar, fat and organ meats.

On the topic of mental health, participants were basically in good mental health. Evaluated by the Thai Mental Health Indicator (TMHI-15), the survey found that more than 60 per cent of the participants became mentally stronger. The result found no issues associated with depression, while participants have a good ability to control their emotions.

Also more than 80 per cent of the respondents said that they know about saving through banks, insurance and life insurance. They also have a good attitude or recognise the importance of financial planning, financial planning for healthcare, and monthly accounting. Around 60-75 per cent said they want to have an income and expense account and a household financial account. However, only 10-20 per cent of those respondents managed to obtain one. The survey also found that 35-50 per cent of the survey participants make an advance financial plan every month, 49 per cent have a retirement plan, while 25 per cent do not. Meanwhile, up to 61 per cent said they have debts. The change agents, therefore, need time to build awareness and encourage communities to create a good financial plan.

The working groups in Bangkok and Ubon Ratchathani, along with the change agents, should be developed into a collaboration network to support the social protection system for the elderly citizens, long-term care system for seniors, as well as an integrated system to prepare for an ageing society, the project concluded. 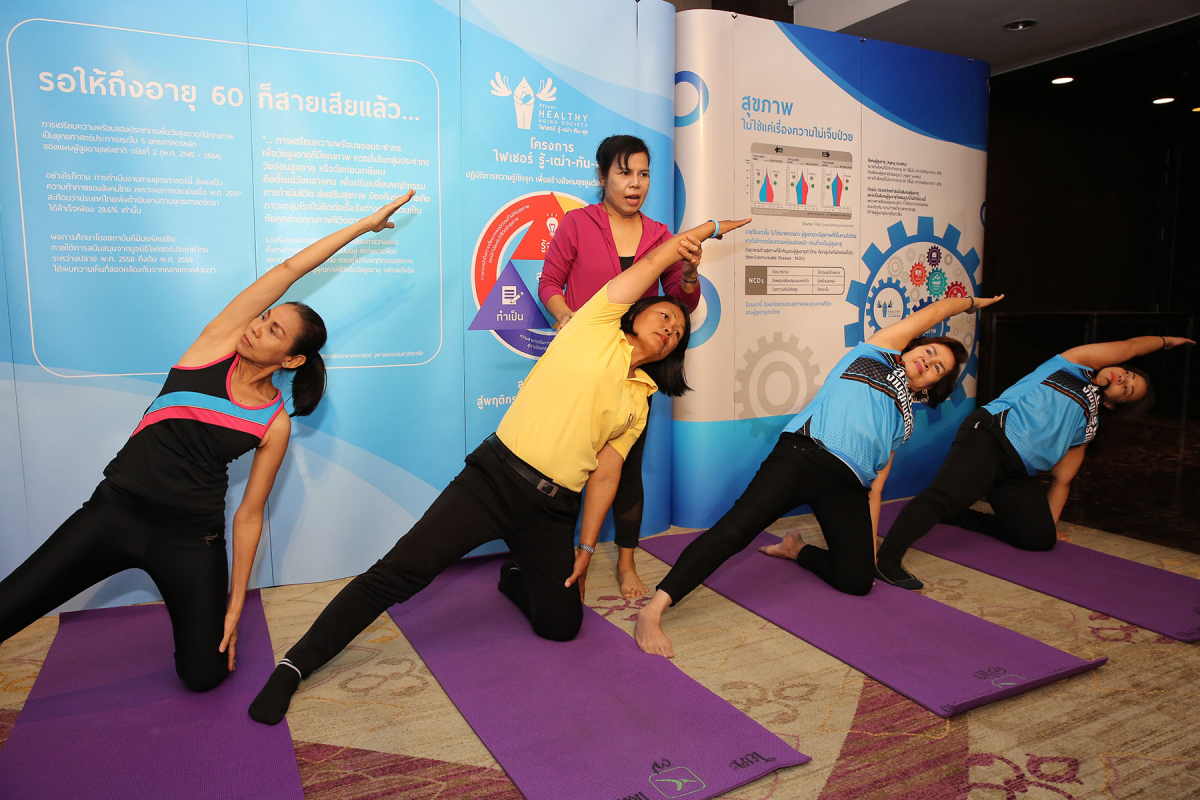 By unifying all efforts from networks at the provincial and district levels, the strategic move could lead to the development of a “collaborative ecosystem for ageing society district”, which could be further developed at the national level. Channelling through the government agencies, the Pfizer Healthy Ageing Society could be implemented as a model to encourage sustainability towards a shift of health behaviour.