The film adaptation of critically acclaimed novel, “The Garden of Evening Mists”, will have its world premiere at the 24thBusan International Film Festival (BIFF) under the ‘A Window on Asian Cinema’ category, next month.

The movie, which is presented by Astro Shaw and HBO Asia with support from the National Film Development Corporation Malaysia (FINAS) in association with CJ Entertainment, has also been selected to close out the 56th Taipei Golden Horse Film Festival in November. 2019. “The Garden of Evening Mists” is an adaption of the novel which was shortlisted for the 2012 Man Booker Prize, and also won the 2013 Man Asian Literary Prize and the 2013 Walter Scott Prize and is produced by an international team from Taiwan, Japan, Malaysia, Singapore, India, Australia and the UK. 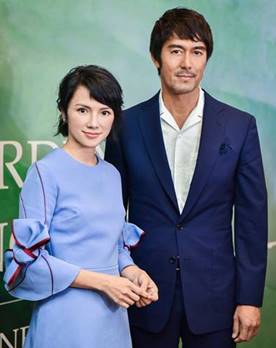 The film tells the story of Teoh Yun Ling (Lee) who, embittered from atrocities of World War II in Malaya, seeks solace in the rolling hills of Cameron Highlands. There, in her quest to build a garden in homage to her late sister, she embarks on a forbidden love affair with the mysterious gardener, Nakamura Aritomo (Abe).

“Our belief in Malaysian storytelling led us to initiate the production of this film adapted from Penang-born author Tan Twan Eng’s wonderful book. We feel validated and so proud to be recognised by our peers with the film’s global premiere at the prestigious Busan International Film Festival and to close for the Taipei Golden Horse Film Festival,” said Astro’s Agnes Rozario.

Jonathan Spink, chief executive of HBO Asia agreed, saying: “HBO Asia is thrilled that the feature film we partnered with Astro Shaw on, “The Garden of Evening Mists”, will screen at both the Busan International Film Festival and the Golden Horse Film Festival. HBO Asia is not only committed to bringing quality and award-winning Asian Original series but feature films to our audiences across 23 territories in Asia and beyond.”

“We are immensely delighted that The Garden of Evening Mists will be screened during the Busan International Film Festival and Taipei Golden Horse Film Festival. Over two thirds of the cast and crew are Malaysian. This signifies our potentials and capabilities in producing an International Film and we pride Astro Shaw for its commitment to nurture local talents for international exposure. Thus, we are excited to have a film which FINAS has supported to be showcased to the world,” added Hans Isaac, chairman of the National Film Development Corporation Malaysia.

“The Garden of Evening Mists” will go on general release in Malaysia in January.