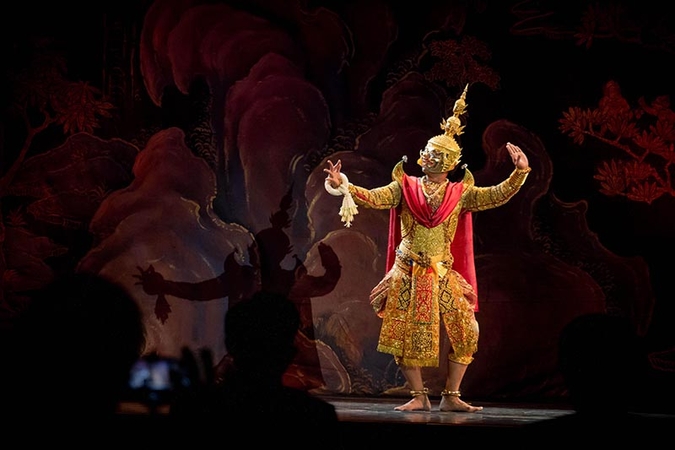 The annual Khon masked dance performance is returning for its 13th edition on November 6 and this year will feature the “Sueb Marga: The Adventures of Hanuman” episode from the Ramakien.

Presented by The Support Foundation, the show will run at the Thailand Cultural Centre through December 5.

Continuing the royal initiative of Her Majesty Queen Sirikit The Queen Mother to present an annual khon masked dance performance and celebrating the United Nations Organisation for Education, Science and Culture (UNESCO)’s listing of Thai khon masked dance as an Intangible Cultural Heritage of Humanity in November 2018, the performance will once again promote and perpetuate the beauty of this ancient Thai art form for future generations in the form of “Khon Luang” or royal court style complete with elaborate costumes, special effects, and amazing stage scenes.

Participants attending the recent the press conference were given a sneak peak of the action scenes including Tosakanth’s procession, Tosakanth’s Chui Chai solo as he enters the garden, and Hanuman’s fight with Angkat Talai. 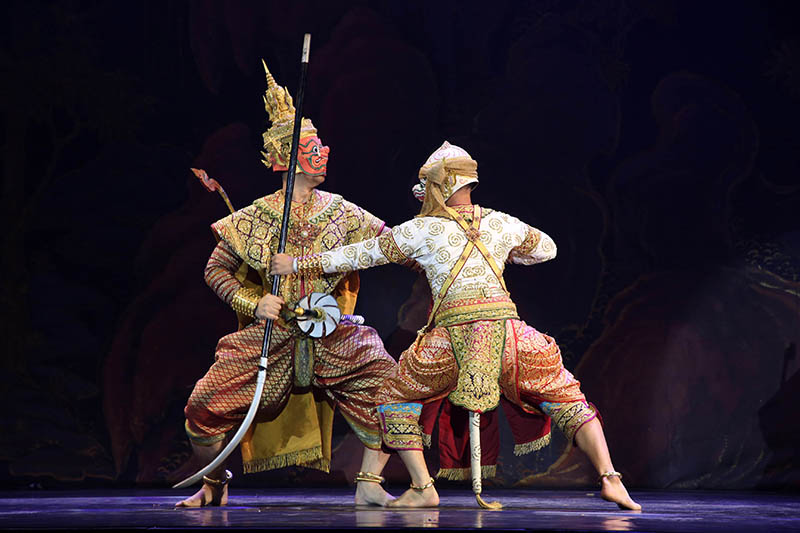 This year’s performance introduces several new characters including the bird Sumpatee, the Sea Ogress, Angkat Talai and the giant Yak Pak Lan. Of note are some of the costumes, which are more outstanding than in previous episodes, such as the golden-faced Tosakanth wearing a shoulder cloth and boasting a garland around his right wrist. He holds a folding fan and opens it with a flick of the wrist during his dance performance. In addition, Tosakanth’s Chui Chai dance as he goes to the garden is not only beautiful, but displays the amorous Tosakanth

Thanpuying Charungchit Teekara, secretary general of the foundation, and chairperson of the production, said: “Her Majesty Queen Sirikit The Queen Mother is truly pleased with the remarkable success of the khon performances. Young people and children have even been taking elderly members of the family to the show, which is quite a new phenomenon and deeply gratifying to see. Her Majesty has therefore instructed that the khon performance should be organized annually, since khon is an important Thai heritage, and Her Majesty wishes to create an awareness of this among the Thai people so they can help preserve this art form for future generations.” 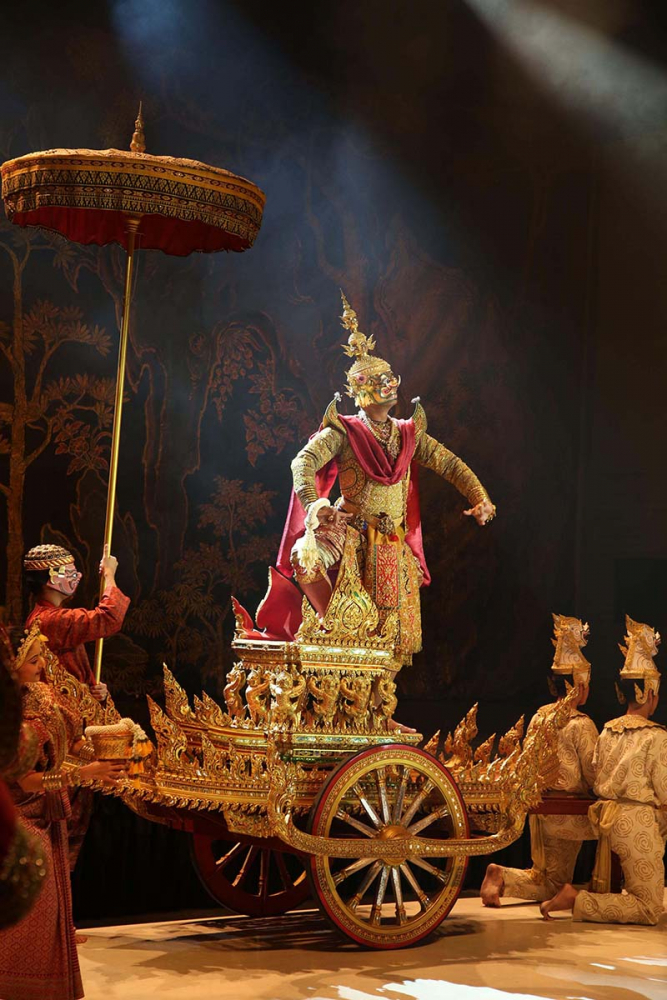 For his part, committee member Dr Anucha Tirakanon stressed the importance of the commitment Thailand has to preserving this cultural heritage in line with Unesco’s listing, which demands that the production be of the highest quality and continue to draw audiences.

“We have khon performers all over the country with 12 Colleges of Dramatic Arts, master creators of khon masks, elaborate costumes and accessories. With the world class production of the Support Foundation Khon performance, we are confident we can carry out the mission to preserve this cultural performance. We always encourage new generations to join and also to come to the shows so that the khon performances will be alive.”

Dr. Surat Jongda, scriptwriter and director, described the outstanding elements of the “Sueb Marga” episode, saying: “This is a fun and lively episode, containing a range of emotions and colourful elements. Backdrops and technical effects have been upgraded from past years,

becoming more of a fantasy to enhance the viewing pleasure. You will see the adventures of Hanuman in various locations on his way to Longka City. There are several highlighted scenes such as the river scene where Hanuman and the simian soldiers find themselves by a wide river, and Hanuman has to use magic to enlarge himself so he can use his tail as a bridge for the rest to cross. There are also new characters who have never appeared before in previous episodes and we have invited National Artists as guest artists to choreograph the dance movements. Most importantly, the pace of the story is tight, the

story moves quickly and is exciting, which should appeal to young audiences. Khon aficionados should definitely not miss this presentation.”

The khon performance “Sueb Marga” is divided into two acts comprising 10 scenes. The highlight is the battle scene between Hanuman and Angkat Talai. When Hanuman was flying into Longka City, the guardian of the air of Longka, Angkat Talai, tried to block his entrance, and was eventually killed by Hanuman. Hanuman also flew over the ocean and

the Sea Ogress, another guardian of Longka City, attempted to block him with magic. She tried to swallow Hanuman who flew into her stomach and cut open her belly. The main love scene takes place in the palace of Longka. Ever since Tosakanth abducted Sida and hid her in the Suan Kwan Garden, he had been obsessing about her day and night. When he

was free from his duties, he ordered a procession to take him to Suan Kwan Garden, and he dressed up in beautiful clothes in order to attract her.

Tickets are now available from all ThaiTicketMajor counters, or from www.thaiticketmajor.com. Further information can be found at