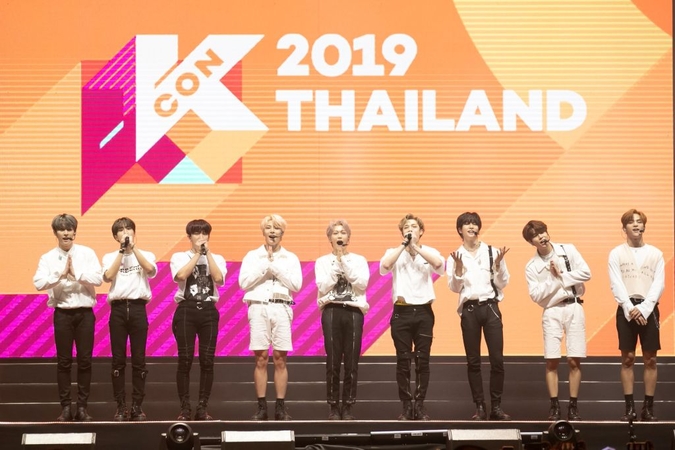 It even managed to surpass last year’s debut KCON, which set so high a standard, with the 2019 version living up to all expectations and more.

CJ ENM had BOY STORY, EVERGLOW, GOLDEN CHILD, GOT7, ITZY, Kim Jae Hwan, NATURE, ONEUS and THE BOYZ performing for fans on the first night of the two-day event and brought (G)I-DLE, AB6IX, ATEEZ, BVNDIT, Chung Ha, IZ*ONE, Stray Kids and VERIVERY to delight fans inside the concert hall on the second night. The biggest highlight of this year’s concert, rookie boy band X1, appeared both nights, a testament to just how popular the 11-member band has become since making its debut in late August.

Held on September 28 and 29 at Impact Arena and Impact Exhibition Centre, KCON attracted more than 45,000 visitors – young and old, Thai and foreign.

Two singers from  (G)I-DLE, Minnie and Choi Mi Yeon, got so close to members of the audience while briefly serving as emcees

Despite the huge numbers, the venue was big enough to accommodate everyone without feeling overcrowded. And organizers had obviously listened to the positive feedback from last year’s event, doubling the size of the convention for the 2019 edition.

Fans queued up for a chance to tour the convention zone even before its scheduled opening at 10am. And people kept filing into the zone throughout the day to explore the best of Korean pop culture or hallyu. K-Food and K-beauty vendors manned interesting booths. Many of them organized games and handed out such tempting prizes as concert tickets. Souvenirs and freebies were also aplenty.

But what visitors liked best about the convention were the opportunities to get up close to their favourite artists. For example, (G)I-DLE appeared on a small stage inside the convention, just a stone’s throw away from the band’s admirers. Members of this girl group arranged a bouquet of flowers then threw it randomly into the cheering crowds. Chung Ha was over on another stage for a frank talk with fans.

X1 members were inside the convention zone on Sunday afternoon too, drawing ear-splitting screams from their fans.

The fun inside the convention zone ran until 6pm on both days, after which some lucky fans could take part in Meet & Greet sessions and the red carpet.

The concerts started at 7.30pm sharp, with Nichkhun from 2PM serving as a special MC. To the surprise of concert goers, Nichkhun did not address the audience just from the stage. For one brief moment on Sunday, he appeared right next to one lucky girl to interview her and granted her wish to talk to her favourite star Park Woo Jin of AB6IX, who responded live from backstage with Natty, a former Thai contestant of South Korea’s “Idol School” serving as a co-emcee. Soon after, Minnie, who’s Thai and one of her Korean counterparts Cho Mi Yeon (Korean) from (G)I-DLE also got up real close with fans in pretty much the same way. Excitement ran high throughout the two-and-a-half-hour-long concert.

Another surprise for fans was that the concert featured some songs from the widely watched Korean series, “Hotel Del Luna”. Chung Ha crooned “At the End”, which she also sang for the series’ soundtrack while Choi Jong Ho from ATEEZ, Ju Yeon Ho from VERIVERY and Kim Woo Jin from Stray Kids covered “So Long”. 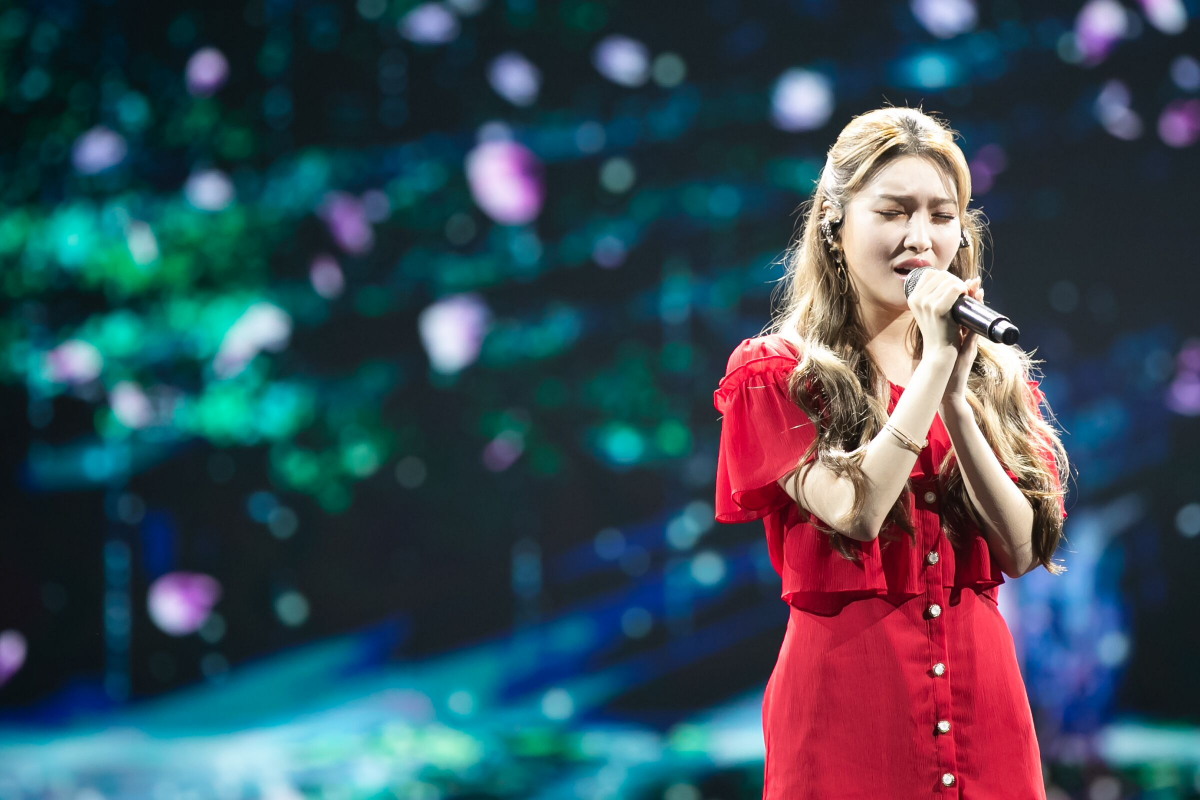 On Sunday, screams rose to the max when X1 rolled out across the stage and there were loud cheers during the finale performed by hottest new girl group IZ*ONE. And to the delight of the audience, all stars came out on stage one more time to wave goodbye.

KCON 2019 will become a beautiful memory for those who love hallyu and fans are probably already counting down the days until the 2020 edition! 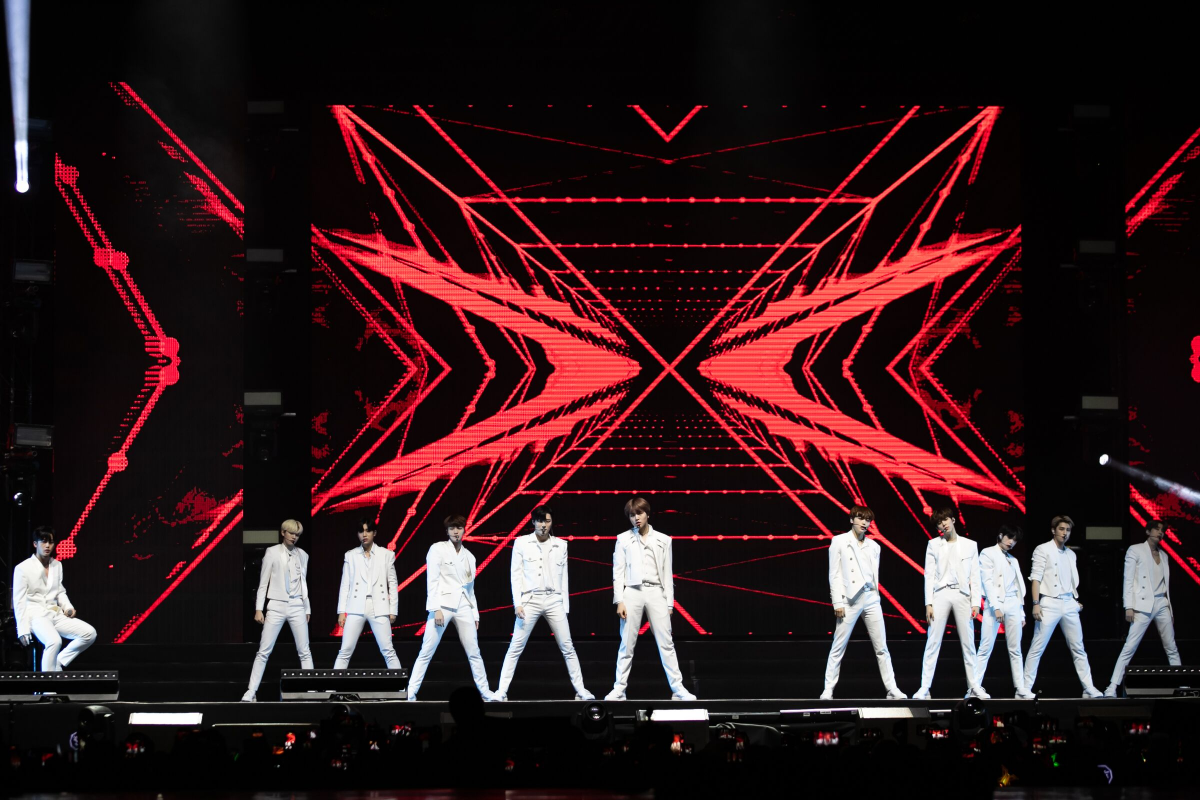 Kim Yohan, who has recently sustained ankle injuries, sits on a chair while performing alongside 10 other members of X1. The band gets overwhelming support