An icon of Buddhist folklore, Nang Phya Ka-Pheuk, which is directly translated as “great white crow”, has been crafted on a wax castle to be exhibited to mark the end of Buddhist Lent on October 12 at Phra That Choeng Chum temple in Sakon Nakhon province. 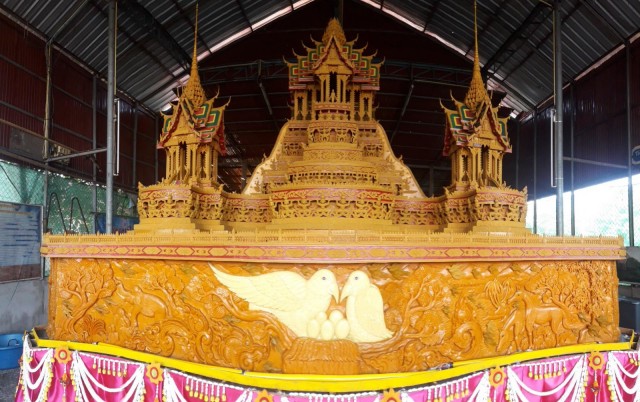 The Chief of Phra That Choeng Chum community, Nuuna Upapong, said the waxwork makers are almost finished the wax castle after two months and 20 days of work.

Folklore tells of a great white female raven that observes Buddhist precepts and stops killing meat to eat. After her five eggs were laid on a fig tree – this tree was mentioned often in many Buddhist folklore tales as Buddha reached enlightenment under it – and she flew from the nest in search of food, a storm blew all of the eggs into the water, where they floated. When the raven came back and saw no eggs, she was filled with regret and died weeping.

All the eggs floated away to other islands and were later adopted by the great birds and legendary creatures. When the eggs hatched, there are were five male humans, four of which became buddhas – Kakusanta Buddha, Konakom Buddha, Kassapa Buddha and Kotama Buddha.

When the top of the castle is completed, the wax temple will be ready to open for the public and will be rated by judges in a provincial waxwork contest celebrating the end of the Buddhist Lent festival. Their rating focuses on how successfully the wax maker combines Buddhist lore with local history, along with the techniques used in the final work.

Tourists who wish to see the wax temple and its carved story of the great white raven, can view it this evening (October 11) in the garden of Phra That Choeng Chum temple.