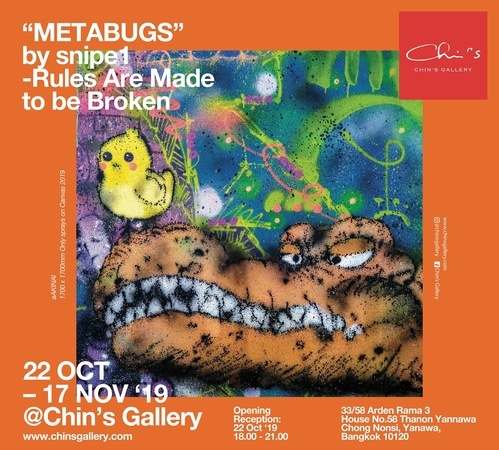 Renowned Japanese artist Snipe1 brings his graffiti art to Thailand for the exhibition “METABUGS – Rules are meant to be broken” opening at Chin’s Gallery in downtown Bangkok on October 22.

This is the first solo show outside of Japan for Snipe1, who has been delighting art enthusiasts at home since the ’90s, though he did collaborate with critically acclaimed artist Takashi Murakami at Beyond the Street in New York City early this year.

With “METABUGS”, he breaks all the rules of traditional art by using graffiti techniques inspired by street styles and sprays on canvases.

Chin’s Gallery at Arden’s Rama III is open Wednesdays through Sundays from 11am to 7pm. The show continues until November 17.