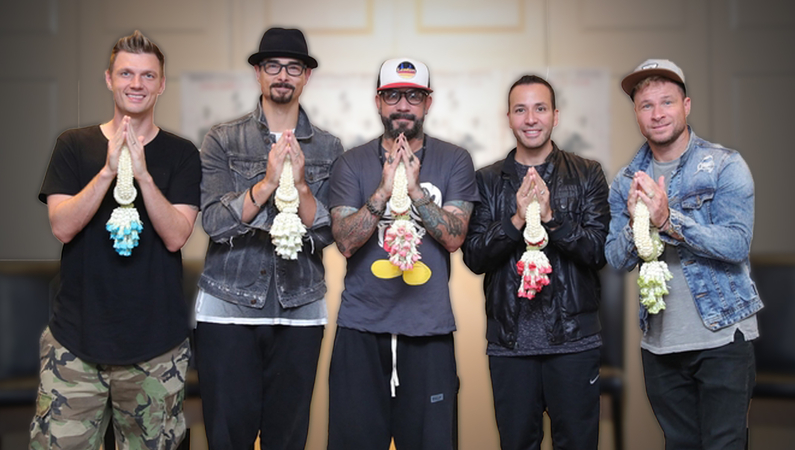 American music greats Backstreets Boys have landed in Bangkok and will be delighting their legions of fans tonight (October 24) at Impact Exhibition Halls 5-6, Muang Thong Thani.

The “DNA World Tour”, which kicked off in May in Portugal, is Backstreet Boys’ biggest arena tour in 18 years and has seen them perform all over Europe, North America and Asia.

American music group Backstreets Boys talk to the Thai media ahead of their DNA World Tour Live in Bangkok due on Thursday 24 October 2019 at Impact Exhibition Hall 5-6.

Posted by The Nation Bangkok on Wednesday, October 23, 2019

“When this group started 26 years ago – and through all the highs and lows of our career – we’ve had to learn it wasn’t about us as individuals but about what’s best for the group,” says band member Howie Dorough.

“That’s what I love about this album,” adds Kevin Richardson. “We were able to bring all of our influences and styles into one coherent piece of work. These songs are a great representation of who we are as individuals and who we are as a group. It's our DNA. We’re really proud of that.” “The journey is ongoing with us and there is so much left to do,” says Brian Littrell. “We’re living the next chapter that hasn’t been told yet, and that's exciting.”

Fans can expect to hear many hits at tonight’s show including “Quit Playing Games With My Heart”, “I Want It That Way”, “Everybody (Backstreet’s Back)”, “Incomplete”, “Shape Of My Heart”, “Show Me The Meaning of Being Lonely” and “Don’t Go Breaking My Heart”,