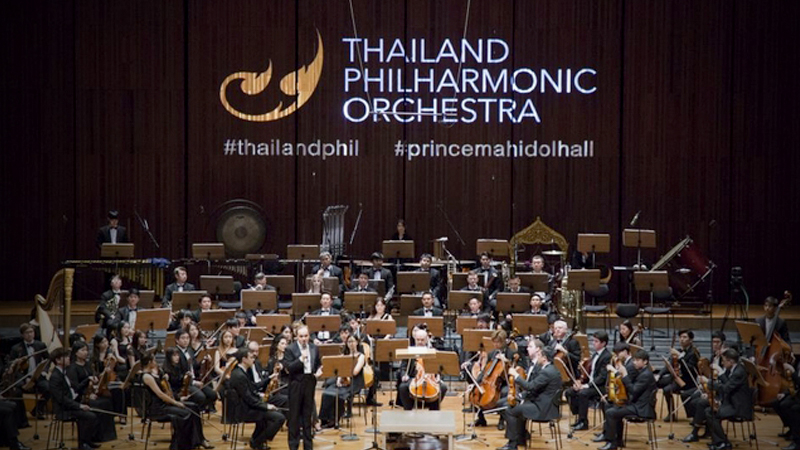 Thailand Philharmonic Orchestra, which has been a significant force in Bangkok's musical and cultural scenes since its initiation in 2005, scored a first recently when the presale tickets for "Harry Potter and the Philosopher's Stone in Concert" sold out within 5 minutes and the rest of the seats were snapped up in just half an hour.

"It is a surprising phenomenon and I'm not sure any orchestra has sold so many tickets for a performance in such a short time," said Dr Narong Prangcharoen, dean of the College of Music, Mahidol University, during Monday's press conference to launch the TPO's 15th season at Arnoma Grand Bangkok Hotel.

"It is one of programmes we have chosen to ensure our orchestra serves people from all walks of life." 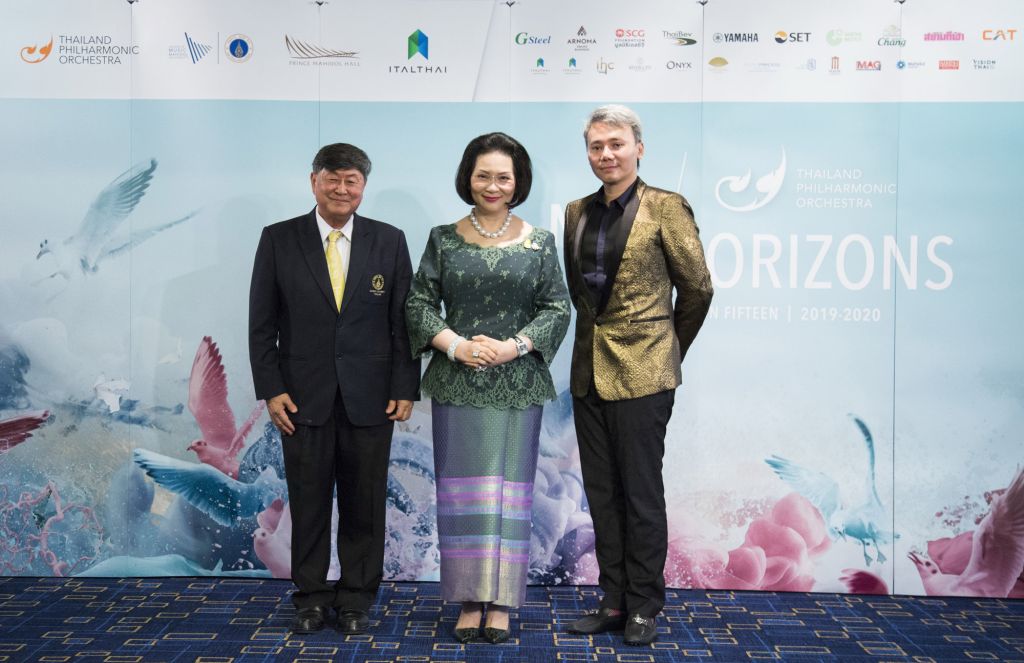 "New horizons, in particular, is our theme for this 15th season as we work to build a bigger and better fan base around our classical music," he adds.

True to the theme, the new season kicks off this weekend (November 8-9) with "New Horizons" composed by Narong Prangcharoen which premiered at the Beijing Modern Music Festival earlier this year.

Also on the programme is Gustav Mahler's "Symphony No 6" featuring an ingenious use of percussion instruments evoking the composer's idyllic love for nature. Maestro Alfonso Scarano conducts. 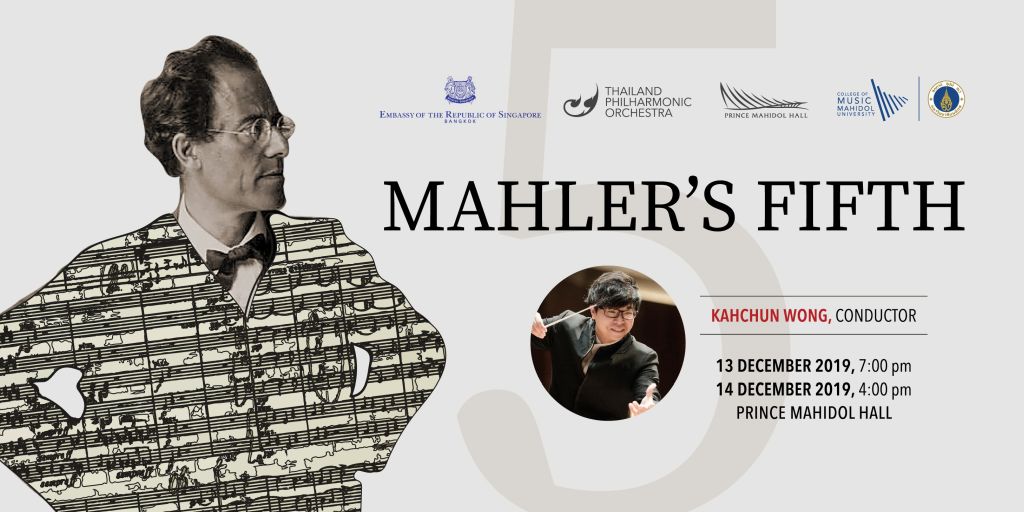 Singapore's Kahchun Wong, the first Asian to win the Gustav Mahler Conducting Competition in 2016, will conduct the Thailand Philharmonic Orchestra in Mahler's "Symphony No 5".

The following weekend (November 15-16), the TPO will perform a selection of arias and overtures from Richard Wagner's operatic works with soloist tenor Nutthaporn Thammathi adding his powerful voice to "Lohengrin" and "Die Meistersinger." "Harry Potter and the Philosopher's Stone in Concert", which will be on November 23-24, is the closing programme for this month.

All concerts will be held at Prince Mahidol Hall, Mahidol University. 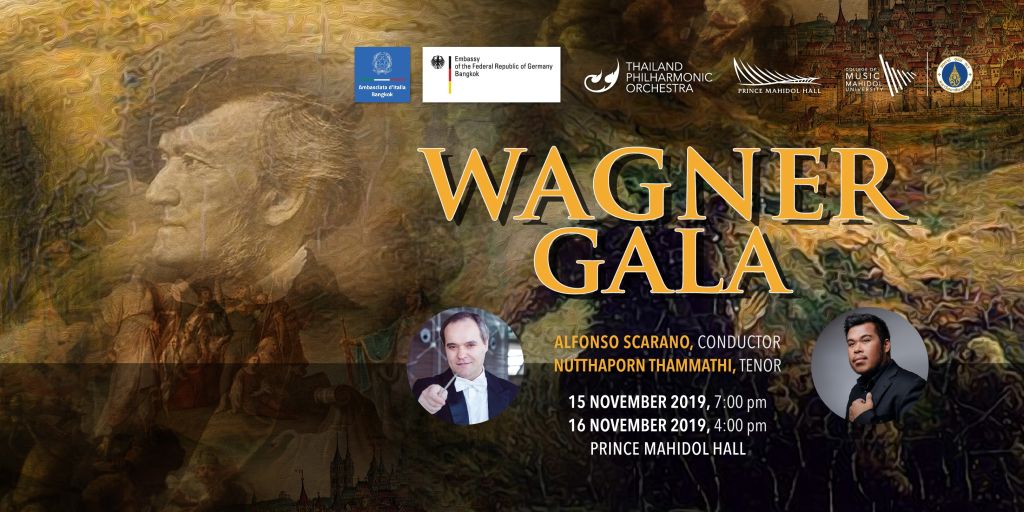 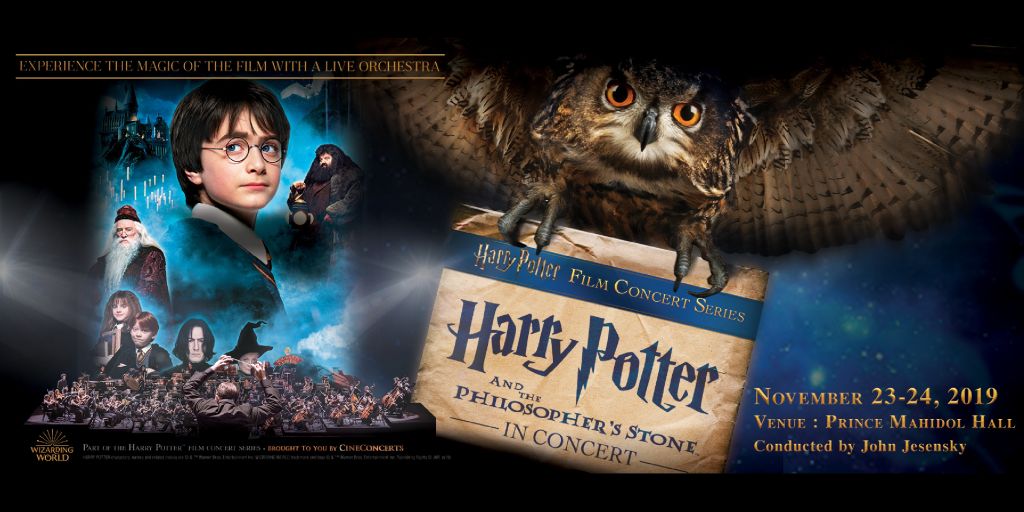 Presale tickets for the "Harry Potter and the Philosopher's Stone in Concert" sold out within 5 minutes and within 30 minutes every ticket had gone.

As ever, this new season will feature several guest orchestras, among them the Royal Concertgebouw Brass, which was voted as No 1 orchestra in the world by Gramophone and Stuttgart Chamber Orchestra. 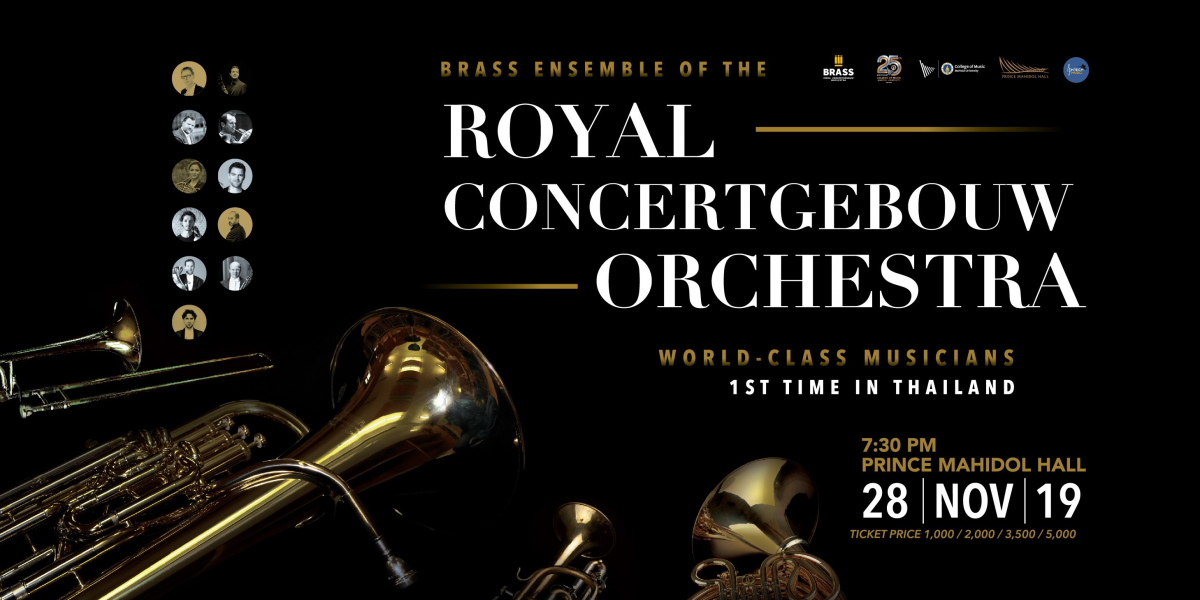 Royal Concertgebouw Brass, which was voted as No 1 orchestra in the world by Gramophone, will make a debut in this fifteenth season.

The 2020 concerts open on Children's Day (January 10-11) with the musical tale of "Sudsakorn", adapted from a Thai literary work and composed by Thanapol Setabrahmana, together with puppet troupe Semathai Marionette.

"Today's new generation doesn't know Thai literature or the works of the royal poet Sunthorn Phu. This will introduce them to the story and at the same time let them listen to music. Most importantly, they will be able to try out musical instruments in a kind of an instrument petting zoo," says Narong. 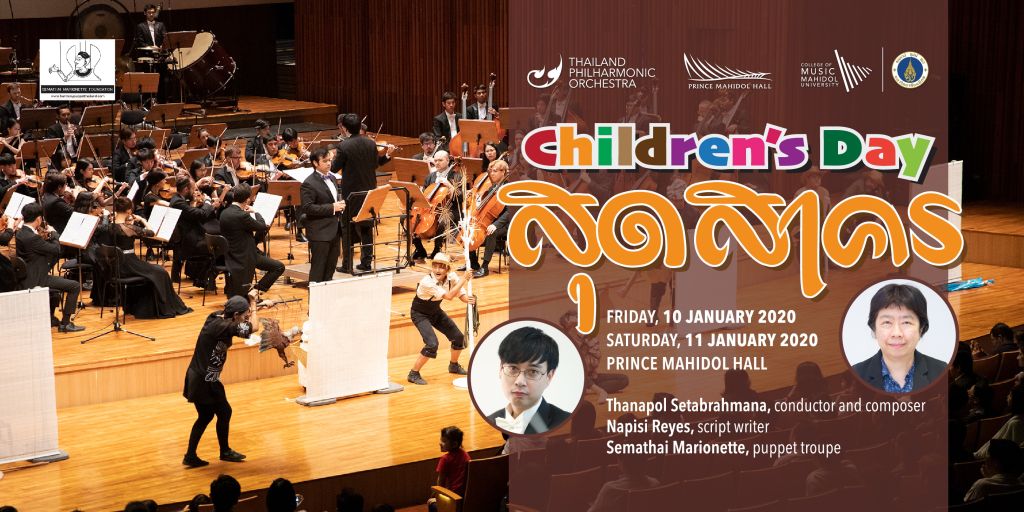 "Sudsakorn" is a musical tale adapted from Thai literature that will be performed together with puppet troupe Semathai Marionette.

February, meanwhile, will see the return of the Thailand International Jazz Conference, one of the hottest tickets of the year. Now in its 12th edition, it will see the TPO pairing with jazz guitarist Kurt Rosenwinkea and Jorge Pardo, a legendary Flamenco jazz saxophonist. On May 30-31, Thailand Philharmonic Orchestra will perform "Star Wars: A New Hope in Concert" which is expected to sell out fast like "Harry Potter."

"We have invited Singaporean conductor Kahchun Wong, the first Asian to win the Gustav Mahler Conducting Competition, to conduct the Thailand Philharmonic Orchestra in Mahler's 'Symphony No 5'. He is currently the chief director for Germany's Nuremberg Symphony Orchestra. Others guests include violinist Philippe Quint, who has been nominated for many Grammy Awards," says Narong.

Maestro Scarano will lead the TPO in eight fascinating programmes including the immense Celebration of Beethoven, a two-day spectacle commemorating Beethoven's 250th birthday that will see the performance of all nine symphonies, a feat rarely accomplished by any orchestra. 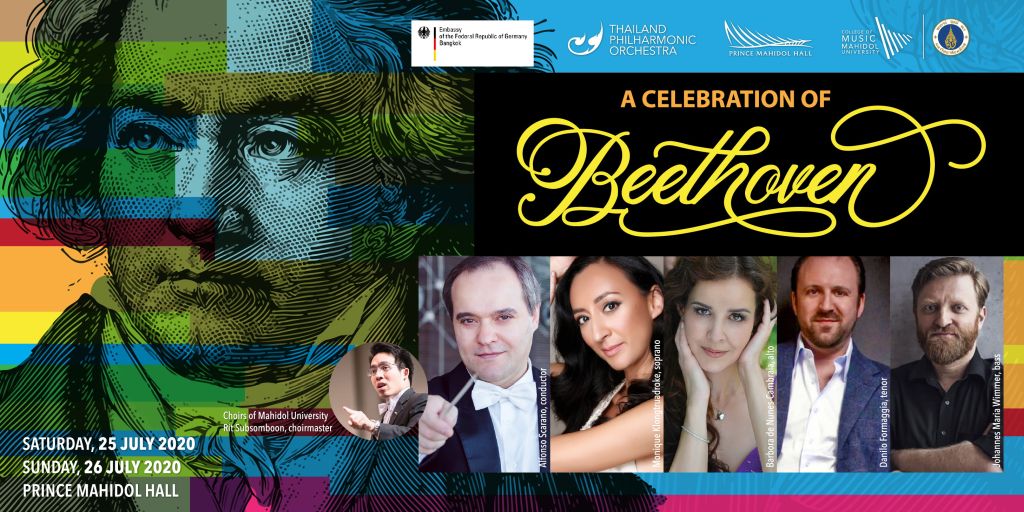 Thailand Philharmonic Orchestra will commemorate Beethoven's 250th anniversary with the performance of all nine symphonies.

The TPO welcomes back maestro Jeffery Meyer, winner of the 2019 American Prize in Orchestral Programming, to lead an innovative and evocative evening of Stravinsky, complete with dazzling visual animations projected onto custom-made installations designed by the faculty of the Mahidol University International College. 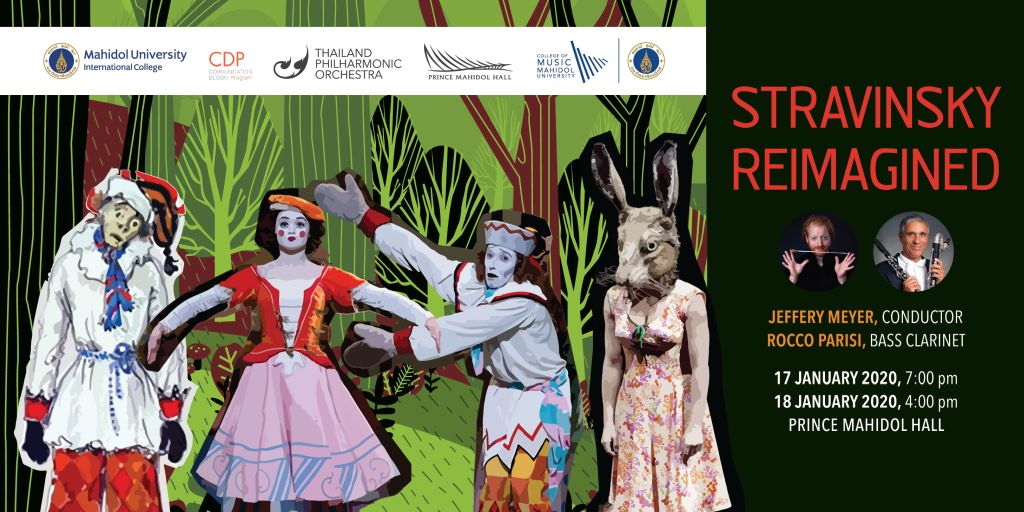 Maestro Jeffery Meyer, winner of the 2019 American Prize in Orchestral Programming, will lead an innovative and evocative evening of Stravinsky complete with dazzling visual animations.

Brazilian maestro Evandro Matte will lead the annual evening of music from Latin America, Spaniard Jose-Luis Novo will conduct a programme of music from Spain, Claude Villaret will lead a concert of national treasures, and Johannes Klumpp will present a sparkling concert of music by Ravel.

One of the College of Music's most important responsibilities is to connect with the audience and the community. It is offering a unique new opportunity of a side-by-side concert to give amateur musicians the thrill of performing on stage at Prince Mahidol Hall with Thailand Philharmonic Orchestra's musicians led by conductor Gudni Emilsson. The applicants must attend an audition.

"For this year, we have 'Saturday Subscription Packages' with up to 60-per-cent savings over single-ticket purchases. We would like Thais to have more chances to listen to good pieces of music. The main purpose of the College of Music is bringing music to society," Narong says. "We want to help Thailand's GDP increase by encouraging young people to have a real experience of being a professional pianist, vocalist or conductor of Thailand. Music is much more than entertainment."