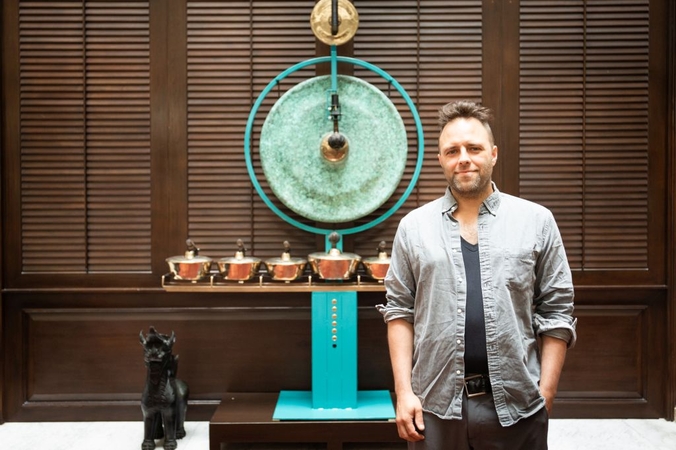 Gamelan is a type of percussive ensemble originating from Indonesia, with equivalents found in terms of instrument and tonality throughout Southeast Asia. Following years of immersion in gamelan culture in Java and Bali, American conceptual artist and musician Kuffner has captured its magic in modern form.

His Gamelatron artworks take handcrafted bronze instruments and retrofit them with suspended robotic mallets. Each is connected to a network that transcribes digital notes into an array of electrical pulsations.

The result is a ghostly automation of a traditional gamelan performance, with original compositions by the artist played.

Greeting guests in the reception hall of Anantara Riverside, the exhibition of Gamelatron will be located at the lobby for long periods of time.

The one-of-a-kind Gamelatron Pohon Electrum 2015 is a vision of powder-coated steel, silicon and bronze. As with all of the artist’s works, the piece is customised to the space to maximise acoustics and visual impact. The artist’s aim is to create a sanctuary for the mind, while furthering the evolution of consciousness through the experience of beauty and the sublime.

Kuffner has created over 60 Gamelatrons over the last decade. They have been displayed at some of the world’s most prestigious institutions and collectives, from the Smithsonian to the Venice Biennale to Burning Man.