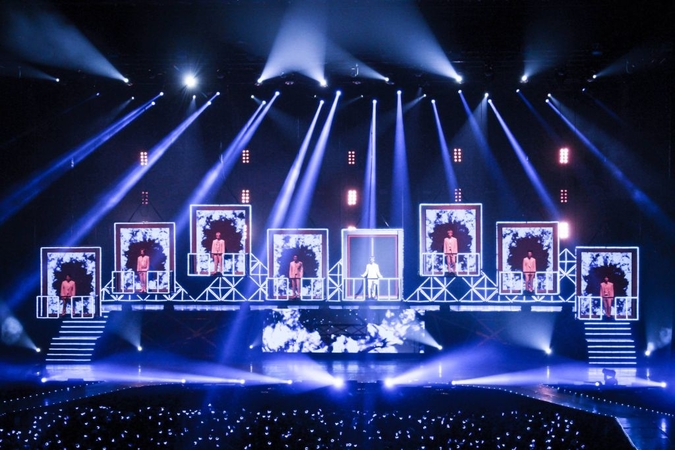 Super Show, a concert brand associated with Super Junior, has been a sensation across the world for many years.

On hearing that there would be two performances of 'SUPER JUNIOR WORLD TOUR – SUPER SHOW 8: INFINITE TIME' in Bangkok, several fans did not hesitate to buy tickets for the two similar shows.

Super Junior, which made its debut here in 2005, can always count on its Thai fans. Known collectively as 'ELF" (Ever Lasting Friends), Super Junior's supporters turned up in full force for the 'SUPER JUNIOR WORLD TOUR – SUPER SHOW 8 : INFINITE TIME' in Bangkok' last Saturday and Sunday, holding up the band's official light sticks.

Super Show 8 marked the eighth time Super Junior staged its Super Show in Thailand. This time, the performances featured Leeteuk, Yesung, Shindong, Eunhyuk, Donghae, Siwon, Ryeowook and Kyuhyun who joined up in May.

On Saturday, the band not only performed their super hits but also numbers from its latest album. Organized by SM True, this concert presented a stage in the form of "infinity shape" to resonate with the 'Infinite Time' theme.

The concert on Sunday kicked off at 4 pm with a video clip showing the Super Junior members in black suits. As excitement soared, the white-clad singers appeared on stage rendering 'The Crown' from their ninth and just-released album, Time Slip. Energy filled the air as the artists went ahead with 'A Man in Love' (remix) and 'Bonamana (rearranged). This opening session then concluded with the South Korean version of 'Blue World'.

Next, it was time for the singers to greet the audience. They tried hard to speak Thai, drawing laughters from the fans. Siwon could speak Thai quite fluently and drew huge screams with, "Roo Mai Puak Khun Na Narak. Ma Yoo Nai Krapao Suea Khong Phom Mai Rao Ja Dai Yoo Duay Kan" in Thai (You know you are cute. Would you like to jump into my pocket so that we can stay together?) But the loudest cheer rose for Eunhyuk, who said "I am happy because (there are) too many beautiful girls" and then pointed at an artificial tattoo featuring "Thai" under his left eye.

After the official greeting, giant screens inside the hall showed a clip of Super Junior members holding hand with a girl who seemed to represent "ELF".

A big wow followed as spotlight shone on Super Junior artists lying on the stage. Cameras hanging from above showed their choreographic moves in an impressive performance of 'Heads Up'. Fun then continued with 'I Think I', 'Sexy, Free & Single', "Mr. Simple', and 'Opera'.

The mood then swung to a "touching" part as Super Junior artists gave their definition of love via a clip. While all answers were warm, Yesung must have delighted ELF the most with his answer – "Love is beautiful and warm. I think love gives optimism. It makes the world more beautiful. And for now, my love is about the audience holding beautiful blue balloons (symbol of Super Junior before the introduction of the band's light sticks) and ELF".

The warm feelings then spread further as Super Junior singers came out crooning 'Love Disease'. The band then sang 'She's gone' and 'My All is You'. Fans felt even warmer as the singers sat down on their chairs facing members of the audience in every direction for the rendition of 'Believe'. Some also reached out to fans to check the messages on the banners they were waving. This session ended with 'Somebody New'.

They then started chatting with the fans on the theme of love. Kyuhyun drew screams when he said his love was for Thailand. Leeteuk told fans that since they had been with the band for 14 years, it should be easy to stay for 14 more years. After the fan talks, they sang 'No Other' while walking around the hall via the infinity-shaped stage to be up close and personal with the audience.

Another clip then came on the screen, showing Super Junior members doing rap with each having their own tune. The funniest came from Eunhyuk, who teased other band members. For example, he said Shindong ate too much and Leetuek was already old.

After the clip, greater fun ensued as Super Junior members turned up in retro attire. They rendered "Rokuko', before Leetuek and Siwon delivered 'Hairspray' together. Next was the KRY dance break, featuring Kyuhyun, Ryeowook and Yesung. Shindong, Eunhyuk and Donghae then served 'What is your name' before all singers joining up on 'Devil', 'Shirt' and 'SUPER Clap'.

It seemed like a finale, but fans started screaming for more as the artists moved away from stage. They got their wish as the band returned for 'Show' and "Too Many Beautiful Girls' amid loud applause.

Some fans even touched the artists and took selfie with them.

And before the curtains came down, the artists asked for an official photo with the audience and took turn speaking to their fans. Their words were all sweet, but Leetuek's might be the most memorable to the Thai audience – "Without our Thai fans, we would have not been the Super Junior today. Please stay with us forever".